For years I have contended that if we do not revitalize our sacred liturgical worship, every initiative we undertake as a Church will wither and face.  Everything we do must start in worship and must be brought back to liturgical worship.  We must reorder our efforts, prioritize if we truly want renewal.

This is one of the reasons that I pound my head on my desk when I read about conferences about “New Evangelization” that lack a strong liturgical component (other than the de rigueur vanilla Novus Ordo Mass with concelebration with some bishop or other for the attendees).

A friend tipped me to something in the Italian daily Corriere della Sera: a newly released text written by Benedict XVI in 2015: a preface for a Russian translation of the volume of his Opera Omnia on liturgy and liturgical theology.

This text – and volume – is being issued for the occasion of his 90th birthday, which coincides with Easter, and which is also Easter this year for the Orthodox (a “sign of the times”?).

Moreover – get this – the Patriarch of Moscow had the volume – on liturgy – from Benedict’s Opera Omnia translated into Russian.

There’s a lot going on there.  Let’s unpack it. 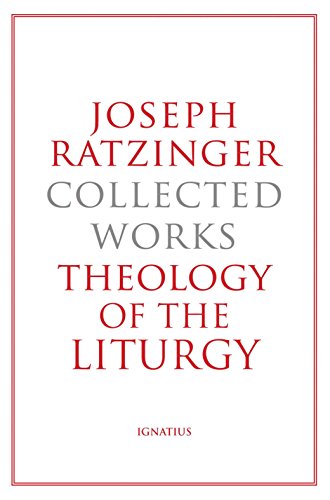 Some years ago, a project was undertaken to edit and to publish all Joseph Ratzinger’s works (Opera Omnia) in a series of definitive volumes.  (The projected volumes: HERE)  Then-Bishop, now Card. Müller was editor of the series.   The project has had its ups and downs, at least in the English translation and publication.  Ignatius Press was handling it.

In 2008 Benedict wrote the preface for the first volume of the Opera Omnia that was issued (in fact it’s Vol. XI) which includes his writings about liturgy and liturgical theology.

That was the correct choice: they began with the single issue that connects and roots all other issues even as it also indicates the Church’s direction and goal.  After all, the celebration of the Eucharist and the Eucharist Itself is the “source and summit” of the Church’s life.

It is interesting that the Russian Orthodox got on board with this.  No?

Do you long-time readers recall I what tagged Benedict XVI?

This was an ecumenical signal on the part of the Russians: watching the Catholic Church they, too, are concerned about our worship.  They clearly think that Benedict’s thought is worth promoting.

What does Pope Benedict say in his preface to the Russian edition?

He starts off with the famous phrase from the Rule of Benedict 43: Nihil operi Dei praeponitur… Put nothing before liturgical worship of God.   Literally, this is “let nothing be put before the work of God”, but ‘opera Dei‘ here means ‘liturgy’, which includes Mass and the public recitation of the Office, especially.  Let nothing have precedence over worship even other great earthly matters are pressing.  That was taken literally: when it was time to pray the office, monks were to stop what they were doing and, immediately, go to pray.  They subsequently returned to their tasks and their tasks were consequently themselves transformed by what they did.

Benedict spoke about this very phrase “Nihil operi Dei praeponitur” back in 2013 during his final encounter with priests of the Diocese of Rome, when he made the point that Vatican II also started with liturgy.  He made that very point again in his first preface to the Omnia Opera liturgy volume.  He clarified even then that, although this rock solid, pivotal principle rises from a monastic context, it nevertheless is a necessary guideline for the rest of the Church.  The monastic life provides a guiding force for the life of the active Church.

Back to Benedict and The Russian Preface™.  My translation (with my emphases):

Nihil Operi Dei praeponitur – Let nothing be put before the Work of God. With these words St. Benedict, in his Rule (43.3), established the absolute priority of divine Worship in respect to every other duty of monastic life. This, even though it is in monastic life, was now immediately to be assumed because, for monks, an essential duty was also in agricultural work and in learning [scienza]. In agriculture, just as in craftsmanship, and in the work of formation there could certainly be temporal exigencies that could appear to be more important than liturgy. In the face of this, Benedict, with the priority assigned to liturgy, unequivocally underscored the priority of God Himself in our life: “As soon as the signal for the time of the divine office is heard, let everyone, leaving whatever he hath in his hands, hasten with all speed, yet with gravity” (43:1).

Things of God, and with them the liturgy, do not appear to be at all essential [urgenti] in the consciousness of the men of today. There is an urgency for every possible matter. The issue of God does not ever seem to be pressing.  Now, one could affirm that, in any case, monastic life is something different from the life of the men in the world, and this is unquestionably true.  Nevertheless, the priority of God, which we have forgotten, is important for everyone. If God isn’t important anymore, the criteria for establishing that which is important are shifted. Man, in setting God aside, submits himself to constraints that make him the slave of material forces and that are thus opposed to his dignity.

In the years following the Second Vatican Council, I became aware once again of the priority of God and of the divine liturgy. The misinterpretation of the liturgical reform that was widely diffused in the Catholic Church led to putting in the first place more and more the aspect of instruction and of one’s own activity and creativity. Man’s “doing” almost led to forgetting God’s presence. In this kind of situation, it becomes ever clearer that the Church’s existence lives from the proper celebration of the liturgy and that the church is in danger when the primacy of God no longer appears in the liturgy and, therefore, in life. The most profound cause of the crisis , which has disturbed (sconvolto – “upset, shocked, ‘freaked out'”) the Church, rests in the obscuring of the priority of God in the liturgy.  All of this brought me to dedicate myself more extensively than in the past to the theme of the liturgy because I knew that the true renewal of the liturgy is the fundamental condition for the renewal of the Church. The writings that are collected in the present volume XI of the Opera Omnia were born on the basis of this conviction.  But, in the final analysis, even with all the differences, the essence of the liturgy in the East and in the West is one and the same.  And so I hope that this book can help also the Christians of Russia to grasp in a new and better way the great gift that is given to us in the Sacred Liturgy.

Benedict identifies the problem we face as a Church.  The Church’s identity has been “freaked out”, as it were, by the upheaval caused by the damage done to our sacred liturgical worship.

And now we are in a “situazione … situation”, as he put it, a typically Ratzingerian understatement.  I wonder what German word he chose: Zustand?  Lage?  In any event, his calm words ring with an urgent call to action: “Rome, we have a ‘situation’.”

Didn’t Card. Sarah make this same point recently in his address to the conference in Germany for the 10th anniversary of Benedict’s Summorum Pontificum?   Yes, he did.  He spoke of “devastation”.  The usual libs had a nutty right on schedule.

For years I hammered away at my conviction that Benedict has laid out, especially in Summorum Pontificum and his own ars celebrandi, a kind of “Marshall Plan” for the Church.  You long-time readers here will remember this, but it has been a while since I’ve presented it.

Here it is again:

After World War II many regions of Europe were devastated, especially its large cities and manufacturing.  These USA helped rebuild Europe through the Marshall Plan so as to foster good trading partners and, through prosperity, stand as a bulwark against Communism.

After Vatican II many spheres of the Church were devastated, especially its liturgical and catechetical life. We need a Plan to rebuild our Catholic identity so that we can stand, for ourselves as members of the Church and in the public square for the good of society, as a bulwark – indeed a remedy – against the dictatorship of relativism.

NB: In his brief preface, above, Benedict says that if God is obscured, then our criteria for what is important shifts.  Relativism dominates us.  Where is our most regular and obvious, strengthening and informing meeting and attention with God?  Liturgy.  With out this constant formation and transformation, we have no idea who we are or what is important.

I have been saying for years that, for any revitalization of our Catholic identity to be successful, we must renew our liturgical worship of God.

We need action in every other sphere as well, but … but… without a renewed sacred liturgical worship, nothing else will stand.  Everything else we do is inexorably tied to our encounter with the transcendent in worship.

Therefore, we must not give preference to any activity in the Church over our sacred liturgical worship.  This is a sine qua non existential priority.

Contrary to the notions of most liberals and progressivists, “the Catholic thing” did not begin in the 1960s.  Hence, I believe that Summorum Pontificum is a key to Benedict’s vision, his “Marshall Plan” as I call it.

His new Russian preface bears out exactly what I have been saying for years and it reaffirms me in my work.

We must work for the prudent and yet energetic application of Summorum Pontificum as far and as widely as possible.

2) Get involved with all the works of charity that your parishes or groups sponsor. Make a strong showing. Make your presence known. If Pope Francis wants a Church for the poor, then we respond, “OORAH!!” The “traditionalist” will be second-to-none in getting involved.  “Dear Father… you can count on the ‘Stable TLM Group” to help with the collection of clothing for the poor!  Tell us what you need!”

7) Don’t whine and blame others.

As I have previously posted Pope Benedict gave you, boys and girls, a beautiful new bicycle!  He gave you a direction, some encouragement, a snow cone, and a running push.  Now, take off the training wheels and RIDE THE DAMN BIKE!

Fr. Z is the guy who runs this blog. o{]:¬)
View all posts by Fr. John Zuhlsdorf →
This entry was posted in Benedict XVI, Hard-Identity Catholicism, Liturgy Science Theatre 3000, Pope of Christian Unity, SESSIUNCULA, The future and our choices, Turn Towards The Lord and tagged Benedict XVI, Marshall Plan, sacred liturgy, SUMMORUM PONTIFICUM, The Russian Preface. Bookmark the permalink.