in S. California, in the exotic periphery of Bakersfield, a priest friend zoomed up to the door of where I was staying and gruffly said, “Get in the car!”.

I was used to this, since he occasionally did this sort of thing and in this sort of way. I, compliant, grabbed what I knew I might need for a longish Adventure With Ralph and, obediently, got into the car.

Off we went.  I tried to wheedle our destination and mission from him, but he was stoic.

Soon we pulled into the driveway of the Kern County Juvenile Detention Center.

“So someone is in trouble after all,” I thought in my innocence.

Little did I realize that my innocence was about to be deluded.

“Get out of the car,” he growled, as his own door swung open.  I, dutiful, obeyed.

Off we went, down the drive, through side streets, on to southbound I-5 towards the Grapevine and smoggy Los Angeles beyond.

It’s not a short drive to LA so I had ample time to contemplate my recent visual experience of the architectural splendors of the Kern County Juvenile Detention Center.

Ralph, as his name suggests, was a pretty good conversationalist, God rest his soul.  So we chatted about many things, except where we were going and why we were going there.

Over the Grapevine and down into the hot sprawl of that ghastly city we drove, reaching the city center.  Having wound through various streets Ralph plunged the car down into an underground lot.

Mere minutes later we were escalated back into the heat and sunshine onto a largish open paved square.  Turning, I beheld it for the first time in my life.

The sight took the breath from my lungs.  It was, quite simply, one of the ugliest buildings I have ever seen.

The RogMahal.  The TajMahony.  The Yellow Armadillo.  The Cathedral of Los Angeles, Our Lady of the Angels.

“What do you see?”, Ralph rumbled.

It was obvious. Inescapable.

I write this today, for the record, because I saw at the site Gloria Romanorum some photos of the LA Cathedral in all its brutality.  My experience flooded back.

Just so that you know what I am talking about…. 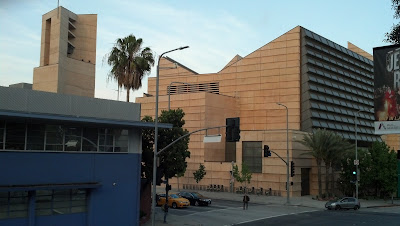 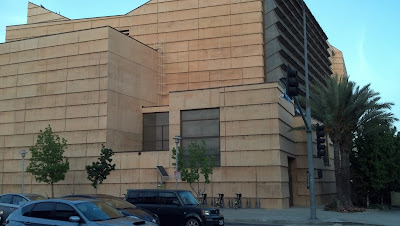 Ralph, mischievous, then brought me to gaze upon the horrors of the LA Opera House.

By now, you are wondering if he had a heart at all.

Subsequent to my brutally eye-opening treatment, we visited the LA County Museum, took a look at the Union Station, visited a couple of charming old churches, and then had supper at a place he knew would serve me my first authentic taste of mole.  Thus, the blows to my soul were salved.

But never will I forget my first glimpse of, quite simply, one of the ugliest buildings I have ever seen.  It will forever be fused in my mind with growling Ralph and The Kern County Juvenile Detention Center. Fr. Z is the guy who runs this blog. o{]:¬)
View all posts by Fr. John Zuhlsdorf →
This entry was posted in Lighter fare and tagged Los Angeles. Bookmark the permalink.