It is fitting to honor those who served in the armed forces and who gave their lives.

Today I especially have in mind fallen military chaplains.

Here is just one example of service and valor for love of God, neighbor and country.

Father Vince Capodanno was Maryknoll missionary priest.  He was sent first to the missions in Taiwan and later joined the US Navy and served with the 7th Marines in Vietnam and then, after working at the naval hospital, with the 5th Marines.

On 4 September 1967 there was a terrible battle in Que-Son Valley.  As the battle developed Fr. Capodanno heard over the radio that things were getting dicey and so he requested to go out with M company.

As they approached the small village of Chau Lam, they were caught under fire on a knoll.  There was terrible fighting, even hand to hand, and they were almost over run.  Father Capodanno was wounded in the face and his hand was almost severed by a mortar round but he continued to giving last rites and take care of his Marines.  He was killed trying to get to a wounded marine only 15 yards away from an enemy machine gun.

In January 1969, Lieutenant Vincent R. Capodanno, MM, became the second chaplain in United States history to receive our nation’s highest military honor. “For conspicuous gallantry and intrepidity at the risk of his life above and beyond the call of duty …”, he was posthumously awarded the Congressional Medal of Honor. 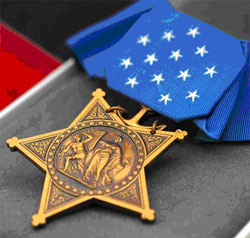 For conspicuous gallantry and intrepidity at the risk of his life above and beyond the call of duty as Chaplain of the 3d Battalion, in connection with operations against enemy forces.

In response to reports that the 2d Platoon of M Company was in danger of being overrun by a massed enemy assaulting force, Lt. Capodanno left the relative safety of the company command post and ran through an open area raked with fire, directly to the beleaguered platoon.

Disregarding the intense enemy small-arms, automatic-weapons, and mortar fire, he moved about the battlefield administering last rites to the dying and giving medical aid to the wounded.

When an exploding mortar round inflicted painful multiple wounds to his arms and legs, and severed a portion of his right hand, he steadfastly refused all medical aid. Instead, he directed the corpsmen to help their wounded comrades and, with calm vigor, continued to move about the battlefield as he provided encouragement by voice and example to the valiant Marines.

Upon encountering a wounded corpsman in the direct line of fire of an enemy machine gunner positioned approximately 15 yards away, Lt. Capodanno rushed a daring attempt to aid and assist the mortally wounded corpsman. At that instant, only inches from his goal, he was struck down by a burst of machine gun fire.

By his heroic conduct on the battlefield, and his inspiring example, Lt. Capodanno upheld the finest traditions of the U.S. Naval Service. He gallantly gave his life in the cause of freedom.

In addition, he was also awarded the National Defense Service Medal and the Vietnam Service Medal. The government of Vietnam awarded him the Vietnamese Gallantry Cross with Silver Star and the Republic of Vietnam Campaign Medal with device.

Fr. Capodanno’s cause has been opened:

Prayer to Obtain a Favor Through the Intercession of the Servant of God Father Vincent R. Capodanno, M.M. by Archbishop Timothy P. Broglio

Almighty and merciful God, look with Love on those who plead for Your help. Through the intercession of your servant, Father Vincent Capodanno, missionary and Catholic Navy Chaplain, grant the favor I earnestly seek (mention the request). May Vincent, who died bringing consolation to the Marines he was privileged to serve on the field of battle, intercede in my need as I pray in the name of the Father, and of the Son, and of the Holy Spirit.

I want to add a word of thanks to a priest friend of mine, Fr. Tim Vakoc, with whom I was in seminary.  He suffered serious wounds in Iraq, which, after causing years of suffering, eventually lead to his passing away. May he rest in peace.

These men served in hell armed with love of God and love of country.  We should remember chaplains.

Fr. Z is the guy who runs this blog. o{]:¬)
View all posts by Fr. John Zuhlsdorf →
This entry was posted in "How To..." - Practical Notes, ACTION ITEM!, Hard-Identity Catholicism and tagged chaplains, Fr. Tim Vakoc, Fr. Vincent Capodanno. Bookmark the permalink.