GERMANY: Pro-women’s ordination group: “We want to take Mary off her pedestal”

The German Church seems to be the caput malorum omnium.

In the wake of the dissolution of the misplaced aspirations of promoters of female diaconate, comes this.

Munich, Germany, May 15, 2019 / 02:15 pm (CNA).- At least one bishop has offered his support for a week-long “Church strike” organized by German Catholic women, during which participants organize their own prayer services rather than attending Mass.

Calling itself “Mary 2.0” the initiative issued an open letter to Pope Francis, which called for the ordination of women, and claimed “men of the Church only tolerate one woman in their midst: Mary.”

[NB:] “We want to take Mary off her pedestal and into our midst, as a sister facing our direction,” the letter said.  [They want to drag down the Mother of God.]

The website features paintings of Mary and other women with their mouths taped over.  [No doubt that is their way of trying to stop Mary from saying, “Behold, the handmaid of the Lord…”.]

The campaign has met with considerable criticism from German Catholics, some of when even launched of a “Maria 1.0” website, which says that the Mother of God “does not require any updates and should not be instrumentalized.”

But several Church representatives have gone public in support of “Mary 2.0.”

The official news portal of the Catholic Church in Germany provided broad coverage of the call for a strike, taking place May 11-18. It also reported that Bishop Franz-Josef Bode of Osnabrück supports the campaign. [Of course.]

Bode, who leads the Commission on Women in the German bishops’ conference, told press agency EPD that while he regrets the strikes will not attend Mass, he believes it important to acknowledge the impatience of “many women in the Catholic Church” and their feelings of “deep hurt” for not being adequately appreciated for their contribution.  [In other words, he is pandering.]

Bode said that while he does not believe women will be ordained priests in the near future, the Church could soon ordain them as deacons.  [LOL]

Participants in the “Church strike” are refusing to step into a church from the week of May 11 to 18 and will not attend Mass. Instead, services such as a “Liturgy of the Word” are held throughout the week. According to the campaign’s Facebook page, these services have garnered between 18 and 155 registered attendees.  [18-155?   Wow!  Tens of women!]

Referencing the abuse crisis as a reason for the urgent need for change, the group’s letter to Pope Francis makes a range of demands, from the abolition of “mandatory celibacy” to an “updating” of the Church’s teaching on sexual morality and the ordination of women to “all ministries” – including the orders of deacon, priest and bishop.

In an interview published on the official website of the Archdiocese of Paderborn, vicar general Fr. Alfons Hardt praised the organizers of the campaign as women who are “concerned about the sustainability of their church.”

Hardt said “this is a motivation that I value highly,” even though the campaign might also create division.

Whether women can be ordained to the priesthood is an open question, Hardt asserted, [wrongly] saying,  [Get this… Wormtongue couldn’t do better…] “on the one hand we have a definitive decision by Pope John Paul II on the question of the ordination of women and on the other hand we still do not have a final answer.  [LOL!] At least in Germany this question is discussed very openly, especially among theologians. It is clear that there is a need for a global ecclesial consensus for this which currently is not the case.”  [It’s being discussed in Germany.  Thus, there is not a global consensus which is apparently necessary to ratify John Paul II’s document.  What a weasel this guy is.]

Germany, ladies and gentlemen.   You think you have it bad where you are?

If they are so unhappy, they should get out.  Of course there’s LG 14.

From a reader in Germany…

ah, I was wondering when you would pick up on that. 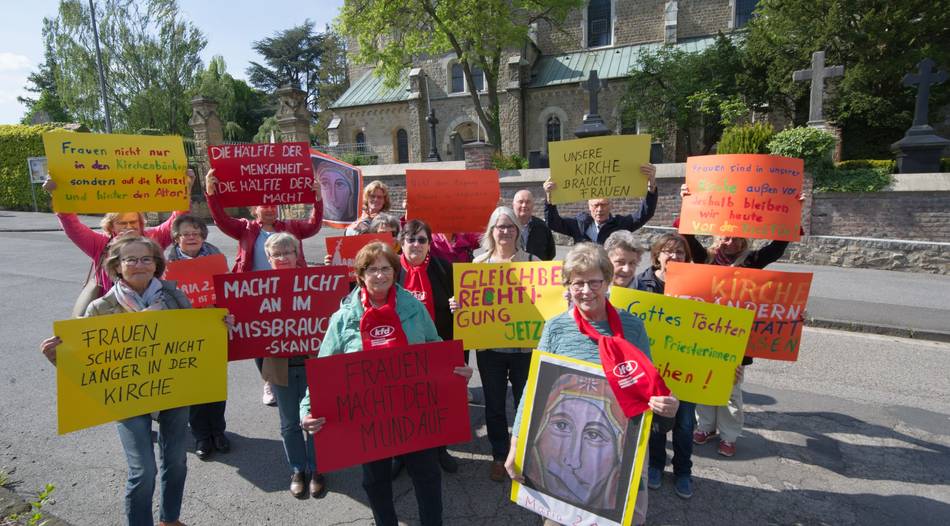 Yes, note the multitudes and masses. 14 elderly ladies of generation 65+ and 2 comatose gentlemen.

However, the newspaper wrote an article. I am sure if I organised 20 people praying the rosary they wouldn’t even bother to mention us.

Fr. Z is the guy who runs this blog. o{]:¬)
View all posts by Fr. John Zuhlsdorf →
This entry was posted in Deaconettes, Liberals, You must be joking! and tagged Germany, women's ordination. Bookmark the permalink.