It’s not easy being green 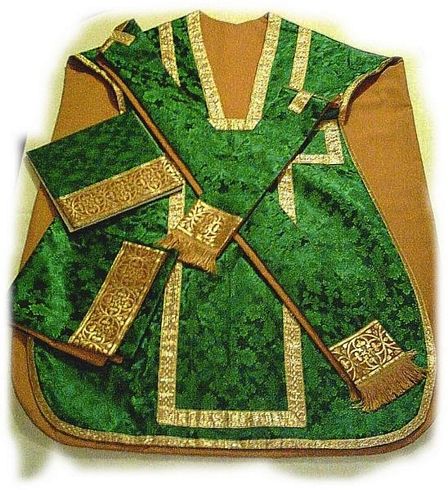 This is from an WDTPRS article long past, reworked and presented for your consideration.

We are in the liturgical season called “Ordinary Time”. What does this mean? After all, while green (for some) symbolizes hope, this “green” season seems to have no specific festal or penitential meaning.

The two divisions of Ordinary Time, one rather short and the other stretching the whole of summer and autumn, were (and still are for those who use the “traditional” Roman calendar) associated with feasts, namely, the time after Epiphany and after Pentecost. This association gave to the year a cohesion now somewhat lacking in the “reformed” calendar.

It is too bad that the English “Ordinary Time” sounds so bland. A sharp witted cleric of my acquaintance sardonically dubbed the two parts of Ordinary Time, “Greater and Lesser Hamburger Season”. Liturgical books, on the other hand, call this time the “tempus per annum… the time through the year” just as they did before the Second Vatican Council.

There is nothing “ordinary” about “Ordinary” Time. “Ordinary” is from the Latin word ordo, “a regular row, line, or series, methodical arrangement, order” having the impact of “proper order”, not just any arrangement. Just as the sacrament of Holy “Orders” is supposed to bring good order to the People of God through teaching, governing and sanctifying, “Ordinary” Time brings order to our daily lives through the year.

This season is about putting into concrete application in an orderly way the mysteries and lessons we have gleaned from those stronger, festal cycles of Advent/Christmas and Lent/Easter. On 20 May 2005 at the National Catholic Prayer Breakfast in Washington D.C., the Archbishop of Denver Most Reverend Charles Chaput, OFM Cap, made a useful observation:

Every year during this week between Pentecost and Trinity Sunday, I reflect on what the Church means when she talks about the season of “ordinary time.” There’s a spot just west of Denver as you descend out of the Rocky Mountains where the mountains suddenly stop, and the horizon opens up, and you gaze out on the beginning of the Great Plains – a thousand miles of flatland between Denver and the Mississippi River. It reminds me of where we spend most of our lives. Not in the mountains, but on the plains – raising families, doing our jobs, making the daily choices that shape the world around us. Ordinary time is the space God gives to each of us to make a difference — between the past and the future, between Pentecost and Jesus’ Second Coming. What we do with that ordinary time – in our personal choices and in our public actions – matters eternally. Solzhenitsyn once said that “the line separating good and evil runs not through states, nor between classes, nor even between political parties, but right through the center of each human heart, and every human heart.”

Each of us has a part in God’s plan for salvation. What we say and do affects the world. God’s providential plan for history, a salvation history, is manifested in the Church’s liturgical year stretching from adoring magi and shepherds before the infant King (Epiphany) to the birth of the Church (Pentecost) to ending of the world when the King of fearful majesty will come as judge. Christ will take all things to Himself, submit them to the Father from whom they came, and usher in the unending reign of peace (Christ the King).

In “Well-ordered” Time we use God’s gift of life intelligently, rationally, in an orderly way, striving to please God in what we say and do at all times. The priest’s green vestments are our sign of hope. Yes. We can live by grace. Yes. We can persevere and be saved. Christ makes it possible even though we fall. All that we have, all that we are, comes from Him. It is good. Yes, we are wounded but, in our being, we are good.