In port, a voyage well-completed

I just picked this up from The Inn At The End Of The World, and I find it ironic, for reasons I shall explain forthwith.

Saturday, August 30, 2008
How To Tell When You’ve Read Too Much Patrick O’Brian

Instead of answering the wife with a perfectly sensible 21st century American "no, thanks", you say "Never in life, my dear".

First, I must object to his premise.  You cannot read too much O’Brian.

That said, shall tell you something?

It is ironic that he should raise this question just a day after I finished my listen through of the Aubrey/Maturin books on audio.

As I was swooping down into St. Paul in my hurtling car, I concluded my hearing of Simon Vance reading Blue At The Mizzen on Blackstone Audiobooks.

You must give yourself the pleasure, before death, of listening to the whole series read by this estimable gentleman.

Also, I know what "gralloch" means and I say things like "progidious great mew", "belay there!", and occasionally even write things like "Shall I tell you something?", which and it’s a common phrase in the book, ain’t it?  I have also slid into thinking of some less than pleasing people less as … well… some of the things you might hear from the foremast jacks as, indeed "reptiles".  A fitting description for some people I know. 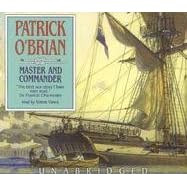 The dear knows that I also have recently been the recipient of gifts from the wishlist sent by generous readers.  Kind souls sent me a cookbook based on recipes from the series, done with regard both for historical accuracy and modern feasibility, which and it’s called Lobscouse and Spotted Dog: Which It’s a Gastronomic Companion to the Aubrey/Maturin Novels.

Sometime this winter, I shall have to attempt Spotted Dog, or a Sea Pie.

You could start your seafaring and societal adventures by listening, if you wish, to Master and Commander [UNABRIDGED – Audio CD).

You’ll clap on, mind you, so have a care.

I worked through the whole series by checking them out through the public library by interlibrary loan: I use that service so much in a month that they have put me on a library diet for interlibrary items: I must now start tapping a friend’s card!  As well as that may be, howeverso much I should give you joy to have the series on disks, it would be dear, to be sure.

If you think that movie based on episodes in the books was good, wait’ll hear them read by a master with true command of the language and of differentiating voices according to class, character and regional accent.

If you do decide to get the disks, however… how I would hope you do, for I shall soon hear of you kicking up Bob’s a dying once you’ve started, let me know and I will put up direct links to help you… and me.

I’m thinking of starting over again!