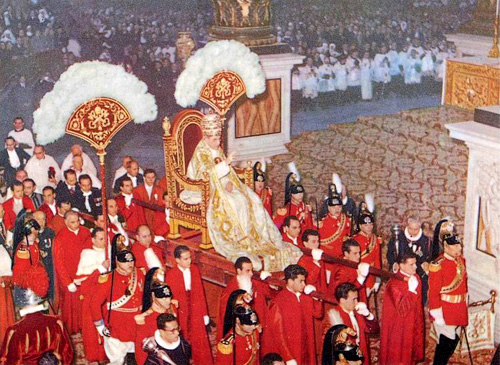 It is nice to have dreams…

I have received a few e-mails today about the possible return of the Sedia Gestatoria.

If the Sedia was not revived for the end of the reign of the late Pope John Paul, I doubt that it will return during this Pontificate so long as His Holiness Pope Benedict is as clear ambulatory as he is… ad multos annos.

The Sedia is highly criticized by some, because – as they say – it smacked of the imperial, of secular power.

I think it was a gesture of humility on the part of the Pontiff, by which he was able to be seen more clearly by those who came, frankly, to see him.

In any event, a few people have written to me.  Apparently, John Sonnen of Orbis Catholicus has also mentioned something about this.

It would be great to see the Sedia return, but I am not going to hold my breath.

Here is one piece of feedback with my emphases:

It’s not all about us, Fr Zuhlsdorf or especially [?] the traditionalists; it’s about the witness the Church gives to the world, and the studia gestatoria would be a poor witness to the Church’s solidarity with the oppressed and witness to "Christ in distressing disguise."

Leaving aside the condescending and sanctimonious tone, he makes some points.

Anyone care to respond?

Would the use of the Sedia be a "counterwitness" to the Christian message?

Here is another piece from John Sonnen:

Finally, after thirty years it is coming back.  And why?
The decision is said [!] to be coming from the Secretary of State, not from the Pope.   [Oh yah?]

Fr. Z is the guy who runs this blog. o{]:¬)
View all posts by Fr. John Zuhlsdorf →
This entry was posted in SESSIUNCULA and tagged sedia gestatoria. Bookmark the permalink.

53 Responses to It’s nice to dream