The Calgary Communion Show Down

I have pretty much spoken my piece about the issue of attempts to deny the Catholic people their rites in the matter of how to receive Holy Communion, especially when a restriction is placed again Holy Communion on the tongue.

Also, you know that the Holy See’s Congregation for Divine Worship has been sending notes to people assuring them that, yes, Redemptionis Sacramentum 92 is still in force… really… no, really!

Now as I get off an airplane I find in my email inbox copies of correspondence and notes from faithful which scorch my laptop’s screen about a dust up in Calgary, Alberta. 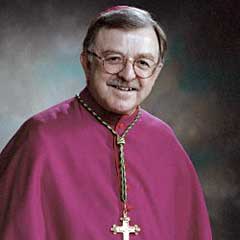 Apparently, the local bishop, His Excellency Most. Rev.Frederick Henry is having a fight with the local presence of the FSSP over the distribution of Communion on the tongue.   The bishop issued "norms" for the Diocese of Calgary which forbid Communion on the tongue because of H1N1.  The FSSP and the people frequenting their Masses are not conforming to his wishes.

Bishop Henry issued the directive to cease distribution of Communion on the tongue following the recommendation from the Medical Officer of Health, whom I assume is a government official.

When Bishop learned that at the FSSP parish people were still receiving Holy Communion on the tongue, he ordered that they not celebrate Mass at all.  He suspended the Extraordinary Form Masses.

He also wrote in one piece of correspondence that

"the current pandemic circumstances do not warrant the non-reception of the Body and Blood of the Lord in favour of a spiritual communion."

I am not sure how that works if you think you are in the state of mortal sin because you are so angry about being bullied, but… I digress.

At a certain point someone pointed out to His Excellency that a bishop cannot forbid Communion on the tongue.  The text of the e-mail ran like this.  Sadly, the person who wrote this was a bit confused, but the substance of the note is not thereby lessened.

The Congregation for the Doctrine of the Faith (CDF), [sic … It was the CDW… Worship, not Faith… but go on…] on 24 July 2009, stated that it is not licit to deny reception of communion on the tongue, despite the current threat of H1N1. Attached is a scan of the CDF’s letter on this matter.

Through Jesus, Mary, and Joseph,
……

His Excellency the Bishop of Calgary wrote back this extraordinary form of response.  I am not making this up.

I am well aware of what the congregation decided but quite frankly, it is not their call. It is mine.

So… this is not the Congregation’s call.

Pretty bold, if you ask me.

Redemptionis Sacramentum is a juridical document of the CDWDS which had the approval of the Roman Pontiff.   The same Congregation has reaffirmed with specific reference to H1N1 what RS said.

Fr. Z is the guy who runs this blog. o{]:¬)
View all posts by Fr. John Zuhlsdorf →
This entry was posted in The Drill and tagged Bp. Henry, CDWDS, Communion, Communion in the hand, Communion on the tongue, Diocese of Calgary, FSSP, H1N1. Bookmark the permalink.