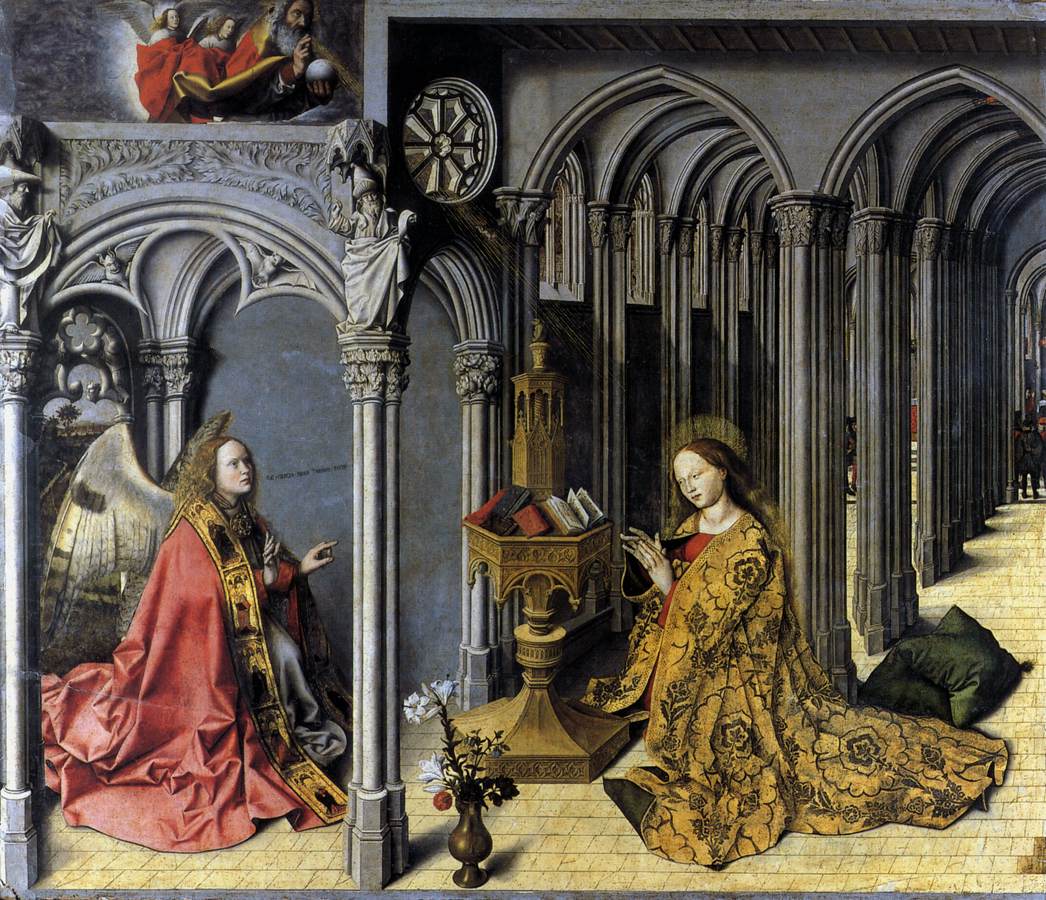 Today, Ember Wednesday of Advent, those who have the use of the older, traditional Roman Missal, offer worship to God with the so-called Missa aurea, the "Golden Mass".

There is a strong Marian overtone to today’s Mass formulary.  The Roman Station for today is St. Mary Major.  the Gospel is the Annunciation.  The illuminated missals and sacramentary of centuries past presented the Gospel or at least its initial capital letters in gold, when our nickname Missa aurea.  And the Gospel pericope begins Missus est angelus Gabriel….  It was once celebrated with a solemnity nearly approaching a feast day.  Thus, Missa aurea also refers to little dramas in medieval times in which the Annunciation was acted out.  It is thus not just "golden Mass" but "the golden sending", which of course refers to the moment in which Our Lord becomes incarnate in the womb of the Virgin and His work for our salvation begins a new phase.  Missa aurea comes to be used in the terminology of art history also for paintings of the Annunciation, which often contain dramatic elements associated with the tableaux struck in the dramatic presentations of the mystery.  Doves would be lowered and an old man would be placed in a loft wearing an alb and cope.  Angels would come vested in dalmatics.  The Arena or Scrovegni Chapel in the 13th c.  Giotto’s frescoes echo this tradition as do many paintings of the Annunciation.

The Advent Ember Days were timed to follow St. Lucy’s feast (13 Dec.).  St. Lucy was an important saint for our forebears.  Her name, derived from the world for "light", is tied to our awareness in the northern climes of the deepening darkness of our December days and that those days will soon be getting longer again.  Listen for the urgency within the threefold "command" we are issuing to the Lord (festina… ne tardaveris… impende).

That form tardaveris is a perfect subjunctive of tardo, "to tarry, loiter, linger, delay", paired here with ne to form a kind of imperative.  That ne tardaveris is found in the Latin version of the Psalms.

Impendo is "to expend, devote, employ, apply".  Pietas, when it refers to man has to do with "duty", but when applied to God, it becomes "mercy… pity".  Remember that adventus here is a genitive with tui.   Sublevo means, basically, "to lift up from beneath, to raise up, hold up, support", but it comes to mean, "to sustain, support, assist, encourage, console any one in misfortune".  The perfect way to describe this vale of tears in which we journey.

This oration looks simultaneously back to the Nativity of the Eternal Word made man, but also forward to the Second Coming, which gives us consolation.  Christians in the state of grace can feel great consolation at the thought of the Coming of the Lord, in history and in the time to come.  We need not be afraid when we are in the state of grace.  Therefore, the Christian always eagerly says "Come, Lord Jesus.  Maranatha.   Come."

Think of this as a "golden rule".

Fr. Z is the guy who runs this blog. o{]:¬)
View all posts by Fr. John Zuhlsdorf →
This entry was posted in ADVENT, WDTPRS and tagged ADVENT, Ember Days, Missa aurea. Bookmark the permalink.