Many years ago I was walking along the river on an evening constitutional with a Chinese friend the topic of differences in food came up.

I asked him whether or not he had eaten dog very often.

"What is your favorite type of dog?", I queried.

He thought about that for a while and returned with "Yellow Dog."

I was instantly amused at the idea of eating certain Democrats, but I didn’t think that is what he meant.

In any event, our walk continued with my suspicion confirmed: yes, different dogs do have different flavors after all!

If you don’t like surprises, it would probably be a good idea when you go to China to learn the characters and words for companion animals.

With that as a preamble, I tip my biretta to Sancte Pater o{]:¬) without whom I might never have learned of this story in the Daily Mail. 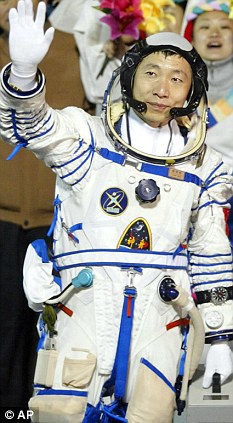 China’s first man in space has revealed that the menu on his spacecraft included dog meat – to keep the astronaut’s strength up.

Yang Liwei, who commanded the Shenzhou Five mission in 2003, revealed canine menu samples that were on-board his craft along with chicken and fish.  [Yes, that "canine menu samples" must be food from dogs, not food for dogs.]

In his autobiography ‘The Nine Levels between Heaven and Earth’ he said: ‘Many of my friends are curious about what we eat in space and think that the astronauts must have some expensive delicacies, like shark’s fin or abalone. [That was not my guess, though I too am curious about space menus.  I am toying right now with facetious comments about the old Space Food Sticks and playing "fetch".]

‘Actually we ate quite normal food, there is no need to keep it a secret,’ he added, listing chicken, steamed fish and dog meat from Huajiang county in Guangdong. [New meanings for the term "doggy bag".]

Finding dog meat, bones and even skulls – they are boiled to make broth – in Chinese supermarkets, particularly in the north of the country, is by no means unusual.  [Yes, there is a breed of Chinese dog called the "Chow".]

Germans and Swiss were recently horrified to find that St. Bernard dogs – traditionally associated with rescuing avalanche victims in the Alpine regions of both countries – are now bred in China on special farms for their flesh.  [OH… THE CANINITY!  But, think about it.  If you are going to eat a lot of dog, and therefore breed them for meat, wouldn’t you opt for da gou rather than xia gou, big dog rather than little dog, for your source of  xiangrou;  I mean… it stands to reason, no?]

The dogmeat menu was still in use last year, when Chinese astronauts conducted their first ever spacewalk.

If China has its way, it will be served when the country accomplishes its goal of a man-on-the-moon in 2030.  [And now I am thinking about moondogs.  Come to think of it, the Moon’s Mare Crisium is sometimes thought to be the "man in the moon’s" little dog.  Mare Crisium is, of course, where the Picard Crater is, named after, yes, Jean Picard, but not Jean-Luc Picard.  If memory serves, there were no dogs on Star Trek.  Though, come to think of it, Data did have a cat…. hmmm…. named "Spot"…. And so we come full circle at last.]

Animal rights campaigners in China were horrified at the revelations.

They believe dog consumption is the preserve of peasants and should not be promoted by people who are in effect the national elite. [What a curiously Chinese argument.  Asking people not to eat dogs just isn’t going to, excuse me, cur-tail their consumption.  At least get famous people not to eat them in public!]

‘Yang Liwei is a role model for so many young people and he is one of China’s greatest heroes,’ said Jill Robinson, the founder of Animals Asia.

‘We hope that he might recognise dogs as the heroes they are too: they found survivors after the Sichuan earthquake and protected people from potential terrorists during the Olympic games. Surely they deserve more.’  [Sorry.  Dogs are not heroes.  Dogs are dogs.  Most people labeled as "heroes" these days aren’t heroes either.]

European astronauts do not have to resort to snacking on man‘s best friend.  [I should think not!]

One of Germany’s Michelin-star chefs now cooks for the crew of the International Space Station (ISS).  [Just think about that.]

Harald Wohlfahrt, [A fitting name for a chef cooking for people who are decidedly going traveling.  Lord.. you just can’t make this up!] fifty-two year old chef of the prestigious Schwarzwaldstube Restaurant in Germany’s Black Forest, was recruited to spice up what was a down-to-earth menu. [And dog on the menu wouldn’t do that?]

Chef Wohlfahrt began revamping the tubed and tinned paste food about 18 months ago when he first learned that the astronauts were eating healthy but less tasty meals because of the special requirements of space.

Salt accelerates bone loss, vitamin D must be added due to lack of sunlight, and sauces can’t be used for fear of spills, [Okay… I wanted to go into space before… but…. ] which, in a weightless environment, could damage electrical equipment with potentially disastrous results. [Yahhhhhh…. that whole Bearnaise Sauce and Oxygen Distribution Circuit combo… not such a good idea.]

Foods also need to be highly seasoned, because astronauts’ sense of taste is diminished in outer space. [On airplanes too, btw.]

Astronaut Frank De Winne gave Wohlfahrt’s new menu a taste test prior to his launch into space and gave the food an enthusiastic thumbs up.

Admittedly there was plenty of room for improvement.  [I should think Chineeese cuisine might help.]

Wohlfahrt tasted some standard astronaut fare before beginning his space food project. ‘I felt sorry for the astronauts,’ he told the Süddeutsche Zeitung. ‘It tasted like cat food.’  [I’m sorry… but how does he know what cat food tastes like?  And are we dealing once again with food for cat or food from cat.  Data and I both want answers!]

"But Father! But Father!", you are surely saying in frustration.  "You gave us that story about ‘Yellow Dog’ at the top and just left it!  Did you never find out what ‘Yellow Dog’ meant?"

Indeed I did, and thanks for reminding me.

We walked along, sometimes in silence, sometimes speaking of this or that.

All of a sudden, he tugged my sleeve.

As they passed he pointed back over his shoulder and said – what a wag he was – and said very quietly….

Fr. Z is the guy who runs this blog. o{]:¬)
View all posts by Fr. John Zuhlsdorf →
This entry was posted in "But Father! But Father!", Fr. Z's Kitchen, Lighter fare, SESSIUNCULA. Bookmark the permalink.