McBrien: Pope does not have full authority in the Church

The latest Fishwrap writer to use the ineffective and doctrinally odd Australian bishop to bash the Holy Father is theological luminary Richard McBrien.  My emphases. 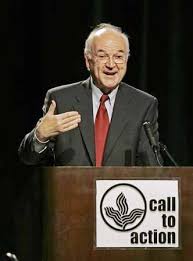 The sacking of William Morris as bishop of the Australian diocese of Toowoomba raises more than a few theological questions about the relationship between bishops and the Bishop of Rome.

Many Catholics believe, and so apparently does Benedict XVI, that the Bishop of Rome is free, by the will of Christ, not only to appoint all bishops in the Roman Catholic church, but to dismiss them as well.

This is an incorrect assumption, and the firing of Bishop Morris provides us with a teachable moment in ecclesiology.

From the very beginning of church history, bishops were elected by the laity and clergy of the various local churches, or dioceses. And this included the Bishop of Rome, known more popularly as the pope.

Note his disdain for the title “Pope”.  Bishop of Rome is, of course, one of the titles which describes the Pope.  In fact, the Pope is the Pope because he is the Bishop of Rome, or the Roman Pontiff.  He is also the Vicar of Christ, though liberals like to say he is Vicar of Peter.  He is the Successor of Peter, but the Vicar of Christ. He is also called the Supreme Pontiff.  McBrien, however, in stressing “Bishop of Rome, seeks to reduce the authority of the Pope to that of any other bishop and to elevate the local churches to something like autonomy.

You don’t have to bother with the rest.  What follows is some spot reading of Patristic texts and tidbits about Popes in the ancient Church.  You would do better to spend some time with J.N.D. Kelly’s Oxford Dictionary of Popes.

This is McBrien’s main point: Popes and bishops should be chosen by popular election, and Popes don’t have any authority over other bishops.  The Pope is just barely a “first among equals”.

Keep this in mind when reading this stuff from the Fishwrap.  Liberals will with spittle-flecked righteousness fuss that the Vatican isn’t taking savage enough action against bishops whom they don’t think are in turn being savage enough in the pursuit of priests who are accused of harming children.

The liberal left loves to criticize Rome as slow to act, it is still slow to act, and it is acting too slowly.  “Why”, they shout, “isn’t the Vatican going after bishops?  Why are there no penalties from the VATICAN against bishops?”

Liberals want the Pope to remove bishops when it suits their own agenda to tear power from the hands of the duly appointed hierarchical pastors.  They can dovetail their agenda into everyone’s popular anger about priests who hurt children.  But when the Pope removes a bishop for a doctrinal problem, they become incensed that the Pope removed a bishop, that he has overstepped his bounds, that he doesn’t have the authority to remove bishops, and, by the way, all bishops should be elected by popular vote.

As intelligent as McBrien and those at the Fishwrap are supposed to be, how do they not see this double-standard?

Perhaps we should revive the protest!

Fr. Z is the guy who runs this blog. o{]:¬)
View all posts by Fr. John Zuhlsdorf →
This entry was posted in The Drill, Throwing a Nutty and tagged Bp. Morris, D. Toowoomba, Fishwrap, Richard McBrien. Bookmark the permalink.