QUAERITUR: Why don’t priests use the Apostolic Pardon for the dying? 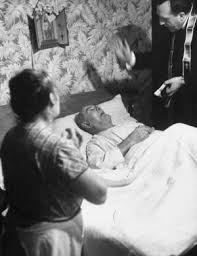 I understand that the Sacrament of the anointing is not the same as the apostolic pardon. Why is it that some priests do not say those words for this pardon and give both the blessing and the pardon? I had a card with the words on it and told my girlfriend who just died and she told the priest she wanted the apostolic pardon which he did give her and now she is in heaven without purgatory.

Thanks for being concerned about the good death of your friend.  We have to help each other.

We have great confidence that by using Holy Church’s sacraments, and also her authority to bind and loose, the “power of the keys”, we can even at the moment of death be forgiven both all of our sins, in the Sacrament of Penance or Anointing, and all of the temporal punishment due to sin with the Apostolic Pardon.

Of course we propose these things, but God disposes them according to His will.

The older form of the Apostolic Blessing:

Ego facultate mihi ab Apostolica Sede tributa, indulgentiam plenariam et remissionem omnium peccatorum tibi concedo et benedico te. In nomine Patris, et Filii, + et Spirtus Sancti, Amen. … By the faculty given to me by the Apostolic See, I grant you a plenary indulgence and the remission of all your sins, and I bless you. In the Name of the Father and the Son + and the Holy Spirit. Amen.

In the newer form I think the words “et benedico te” were removed.

When it comes to forms of Anointing, Penance and the Apostolic Pardon, I always use Latin.

This is a marvelous faculty, given by Holy Church to the priest so that he can grant this remission of temporal punishment and forgive sins.  Used in conjunction with the Last Rites a soul is well prepared to go on to judgment.  Well prepared.  We cannot force God and force souls, but we have confidence that God’s promises to the Church and the Church’s teaching to us are all true.

Why don’t more priests use the Apostolic Pardon?

I am not sure that they don’t.  I know that my priest friends, my circle, as it were, know what it is and would use it.

Other priests?  Not sure.

If they don’t, then I suspect that it is simply because they may not know about it.  It is quite possible that, given the state of seminary training over the last decades, they were never taught about the Apostolic Pardon and perhaps their liberal, discontinuity pastors in their first assignments didn’t use it.  As the old not-quite-Latin adage goes, “nemo dat quod non ‘got‘”.

Another reason they may not use it is that they don’t think the circumstances warrant using it, namely that the person isn’t very close to death after all.

But I think that priests, being generally good men and being involved in the sometimes beautiful, sometimes frightening, always awe-filled moment of a person’s dying breaths and last heartbeats, would want to do everything they could to help the person to his or her judgment.  These are not moments to fool around.  I can’t imagine a priest who would not want to use the Apostolic Pardon appropriately – provided he knew it.

Therefore, it is not a bad idea to have the card with the prayer on it, just in case.

Also, for all you priests and seminarians out there, dig into what the Apostolic Pardon entails.  Don’t be ignorant of this powerful aid for a person’s dying challenge.

Fr. Z is the guy who runs this blog. o{]:¬)
View all posts by Fr. John Zuhlsdorf →
This entry was posted in "How To..." - Practical Notes, ASK FATHER Question Box, The Drill and tagged absolution, Apostolic Pardon, in articulo mortis, indulgence, moment of death, pugatory, Sacrament of Anointing, temporal punishment, Viaticum. Bookmark the permalink.