There is an ACTION ITEM below.  I also call on bloggers who are reading this to pick it up.

From His Excellency Most Rev. John Nienstedt, Archbishop of St. Paul and Minneapolis in The Catholic Spirit.  My emphases and comments: 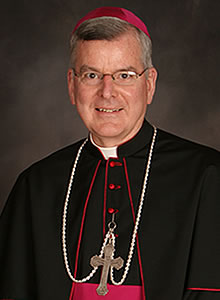 A serious threat to religious freedom

[…] [T]here has arisen a very serious threat to the religious freedom of all religious institutions, especially our Catholic health care programs and Catholic social services, a threat posed by the U.S. Department of Health and Human Services.

Under HHS Secretary Kathleen Sebelius (a Catholic), [I am glad H.E. mentioned this.  She says she is CATHOLIC.] the department is imposing a “preventative services” mandate requiring all private health plans — including ones administered by the church and its agents — to provide coverage for surgical sterilizations, prescription contraceptives approved by the FDA, and “education and counseling” for “all women of reproductive capacity.”

Unfortunately, this is the logical result of a seismic change in this administration’s approach to religious groups involved in providing social services to, among others, the poor, the homeless, the sick, the immigrant.

It began when President Obama and Secretary of State Clinton started using the term “freedom of worship” as distinct from what we have always known as “freedom of religion.”  [Qui bene distinguit, bene docet.]

Such a concept restricts Christian believers in their charitable outreach to society and, in effect, encloses them within their own sanctuaries.  [Sounds like the usual, liberal “rawlsian” approach: side-line as obstacles all positions which don’t fit in the desired consensus those in power are trying to bring about.]

This is radical secularism at its epitome. It is an affront to the centuries of Christian service offered by churches to clients of all backgrounds, color or creed. And, it is the slippery slope to a completely secularized state wherein people of religious conviction will be required to privatize their beliefs and in doing so, at least for Catholics, render their faith meaningless.  [Meaningless might be a little strong, but the Christ, the Perfect Communicator, gave the Church a command to communicate in Matthew 28:19: “Going therefore, teach ye all nations; baptizing them in the name of the Father, and of the Son, and of the Holy Ghost.” We have a faith we practice ad intra and a faith we must practice ad extra.  Furthermore, this ad intra/extra dynamic was an essential goal of the Second Vatican Council.  What is going on here is a secularist effort to marginalize the Church and drive a Catholic voice from the public square.  This will be easier to do the weaker our Catholic identity becomes.  This is why I am constantly ranting about a “Marshall Plan” for the Church.]

I highly recommend two steps.  The first is to write Secretary Sebelius (U.S. Department of Health and Human Services, 200 Independence Avenue SW, Washington, D.C. 20201) or your congressional officers to oppose this mandate and to demand that it be rescinded. These letters need to be received before the end of September. [Get that?  END OF SEPTEMBER.]

Secondly, letters should also be sent to federal congressional representatives to support a bill, [NB] the “Respect for Rights of Conscience Act,” (H.R. 1179, S. 1467), that would protect conscience rights in the Patient Protection and Affordable Care Act (PPACA). This legislation is needed even more so in face of HHS’s mandate to require all private institutions to cover contraceptives and sterilizations.

“Those who sponsor, purchase and issue health plans should not be forced to violate their deeply held moral and religious convictions in order to take part in the health care system or provide for the needs of their families, their employees or those most in need.  To force such an unacceptable choice would be as much a threat to universal access to health care as it is to freedom of conscience.”

(The cardinal’s letter can be found online HERE).

The “preventive services” mandate is a significant threat to religious freedom that should put all Catholics on notice that there are many in government and in our culture who will sacrifice long-held and cherished liberties on the altar of so-called reproductive autonomy.

I ask you to join with me today in taking action to preserve our religious freedom and conscience protection.  History reminds us that “evil triumphs when good people do nothing.”

This is a time for believers to act and let our representatives in government know that this is an unacceptable course of action!

He did not flinch from using the word “evil”.

He urged people to WRITE.

Perhaps some readers here will have some language and strategy suggestions.

Fr. Z is the guy who runs this blog. o{]:¬)
View all posts by Fr. John Zuhlsdorf →
This entry was posted in "How To..." - Practical Notes, Fr. Z KUDOS, New Evangelization, Our Catholic Identity, The Drill, The future and our choices, The Last Acceptable Prejudice and tagged Archbp. Nienstedt, Card. DiNardo, freedom of religion, freedom of worship, Kathleen Sebelius, religious liberty. Bookmark the permalink.