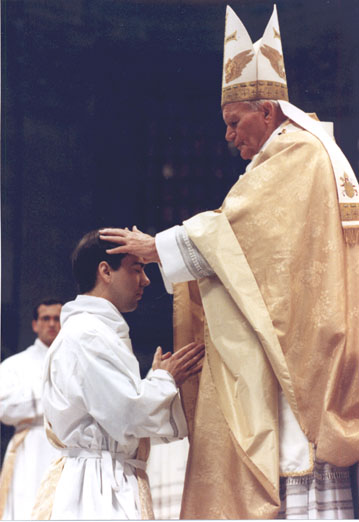 Being that it’s ordination season and there’s lots of new young priests eager to do priestly things, there’s something that crossed my mind recently. My understanding is that in order to hear confessions and absolve sins, priests need permission from the bishop. Is this something that happens automatically once a deacon is ordained a priest, or does there have to be paperwork filled out first? Basically, what I’m getting at is if someone not endanger of death went up to a newly ordained priest right after his ordination, could he licitally and validly absolve that person?

Ordination is one thing, permission from the Church to do priestly things is another.  Validly ordained priests must have faculties (permission, authorization) to say Mass, to preach, and to receive sacramental confessions.

Of course, since there are no longer any benefices, the whole point of ordaining a man – at least for diocesan priests – is precisely so that he can do priestly things.

I was ordained for an Italian diocese and, as a result, I did not go through the process that American priests have at the moment of their ordination. But how different could it be?  In my case – and in the cases of two American priests, one religious and one diocesan, I just checked with, we all had our paperwork, with the indications of faculties, before our ordinations.  I am sure that each new American or English or (CHOSE A PLACE) priest already has paperwork completed ahead of time so that at the moment of their ordination they have, not only their assignments, but their faculties as well.  In other words, they would, from the moment they are ordained, have faculties to say Mass, to preach, and to receive sacramental confessions.

An amusing aside: Since I was working for the Pontifical Commission “Ecclesia Dei” even before my ordination, I wrote my own faculties to use the 1962 Missale Romanum.  The Cardinal signed it ahead of time.  Thus, from the moment I was ordained I also had faculties for the older form of Mass.  Happily, none of that is needed today because of our wonderful Pope Benedict and that great gift to priests Summorum Pontificum.   I still have that document, as a souvenir of the bad old days.

Your question, however, prompts things from my memory.

Once upon a time some men were ordained only to say Mass, they were ordained “simplex“.  Sometimes they were called “Mass priests”.  I suspect that doesn’t happen anymore, except, perhaps, in some monasteries.  Perhaps it should?  I don’t know.  Also, once upon a time, in some places young priests were examined a few months after their ordination for the faculty to hear confessions.  Some continuing education and refreshers might be a good idea.

Digging deeper into my memory, in my own case, before ordination I had to do a whole series of oral exams – conducted by examiners appointed by the Vicariate of Rome – on different “tracts” or “topics”, such as De novissimis (On the Last Things), De gratia (On grace), De sacramentis (On sacraments), De virtutibus (On virtues) etc..  We hadn’t been educated specifically with a “tract” methodology, but they were still examining by it!  I went from examiner to examiner, for different topics.  I actually did one of my interrogations in Latin, since the examiner and I weren’t communicating well in Italian or English.  I did my Hebrew exam in Latin as well, but that is another kettle of gefilte fish.  I also had to write out my oath of fidelity, in front of witnesses, and then read it aloud with my hand on the Bible.  I did that in Latin too.  Hmmm… both my ordinations were in Latin also.  I am sensing a theme.

Given the fact that I frequently receive questions from people about this or that dopey priest using a strange form of absolution, were I pope would ratchet up the pre-ordination exams, especially concerning moral theology and about matters of the confessional.  Were I a diocesan bishop, I would talk to the men I was ordaining for my diocese to find out what they knew and what they didn’t know on a whole range of topics.  I would include the Extraordinary Form of Sacraments.  That’s the Roman Rite, right?  Is a Latin Church, Roman Rite priest well-formed if he doesn’t know half of his Rite?

And while I am getting steamed up, did you know that Canon Law for the Latin Church requires that seminarians be “very well trained” in Latin (can. 249 – “linguam latinam bene calleant“… not just calleant, but bene calleant)?  Did you know that Canon Law requires that they study especially St. Thomas Aquinas (can. 252 §3)?  Did you know that the Congregation for Education/Seminaries requires by a 1989 document that all seminary curricula include a separate rubric for Patristics (HERE and is it in English anywhere?!?)?  If they don’t learn these things, have they been properly formed?  some guy has to stand up in front of the ordaining bishops and attest that they are.  So, as a bishop (which will – thanks be to God – never happen) were I to discern that the gaps in formation were serious enough, I would delay their ordinations and then zoom over to the seminary with Darth Vader music playing and find out why the hell my men didn’t learn a, b, or c.

It is really hard to blame priests of a certain age and era of ordination for things they didn’t learn (though because of the obligations of their state in life they were/are obliged to fill in the gaps once they see them).  Bishops, on the other hand….

I speak not otherwise than it is, but as I find it in my own actual experience. I do not think there are many among bishops that will be saved.  … Do not tell me that the priest or the deacon is at fault. Their guilt comes upon the head of those who ordained them.  (Acta Apostolorum 3, 5-6)

Seminaries are vastly improved since my day.  Vastly.

Fr. Z is the guy who runs this blog. o{]:¬)
View all posts by Fr. John Zuhlsdorf →
This entry was posted in "How To..." - Practical Notes, ASK FATHER Question Box, Four Last Things, New Evangelization, Our Catholic Identity, Priests and Priesthood, SUMMORUM PONTIFICUM, The Drill, The future and our choices, Wherein Fr. Z Rants and tagged faculties, ordination, SUMMORUM PONTIFICUM. Bookmark the permalink.