“I’ve got to have 5 more minutes!” No… wait… different thing. COOL SPACE PHOTO!

Here is a super cool photo from Astronomy Pic of the Day: 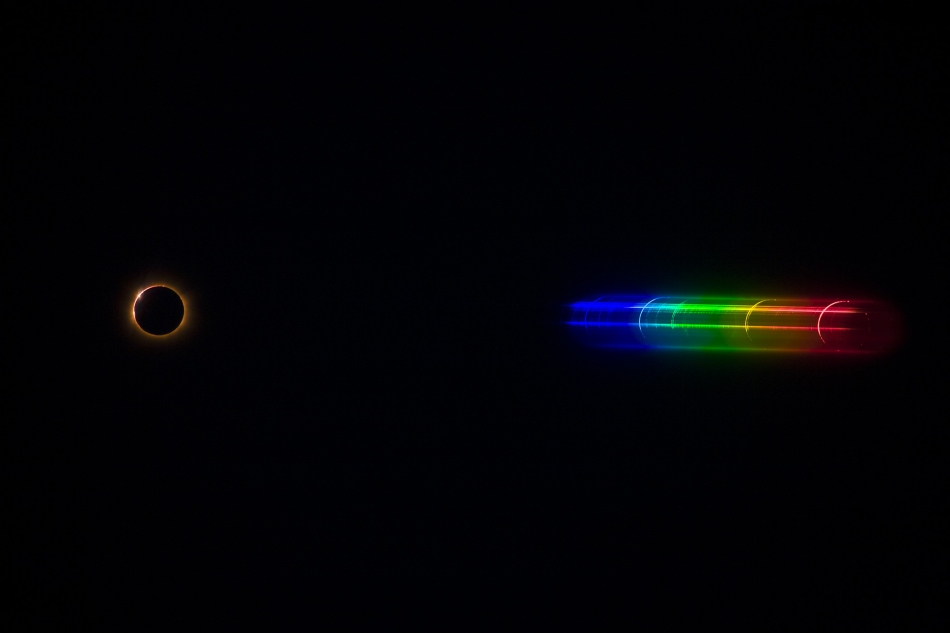 No, this isn’t the Enterprise escaping from the collapsing anomaly by reversing the polarity and ejecting the core and… you know….

What’s up with this?

In a flash, the visible spectrum of the Sun changed from absorption to emission on November 3rd, during the brief total phase of a solar eclipse. That fleeting moment is captured by telephoto lens and diffraction grating in this well-timed image from clearing skies over Gabon in equatorial Africa. With overwhelming light from the Sun’s disk blocked by the Moon, the normally dominant absorption spectrum of the solar photosphere is hidden. What remains, spread by the diffraction grating into the spectrum of colors to the right of the eclipsed Sun, are individual eclipse images at each wavelength of light emitted by atoms along the thin arc of the solar chromosphere. [That is too cool.] The brightest images, or strongest chromospheric emission lines, are due to Hydrogen atoms that produce the red hydrogen alpha emission at the far right and blue hydrogen beta emission to the left. In between, the bright yellow emission image is caused by atoms of Helium, an element only first discovered in the flash spectrum of the Sun.

Fr. Z is the guy who runs this blog. o{]:¬)
View all posts by Fr. John Zuhlsdorf →
This entry was posted in Just Too Cool, Look! Up in the sky! and tagged APOTD, solar eclipse. Bookmark the permalink.