A headline that makes my blood run cold, even as one can marvel at the sights in the heavens.

CME IMPACT, SEVERE GEOMAGNETIC STORM: Arriving earlier than expected, a CME [Coronal Mass Ejection] hit Earth’s magnetic field on March 17th at approximately 04:30 UT. At first, the impact sparked a relatively mild G1-class (Kp=5) geomagnetic storm confined to the poles. Since then, however, the storm has intensified to G4-class (Kp=8), ranking it as the strongest geomagnetic storm of the current solar cycle. Before sunrise, bright auroras were sighted over several northern tier US states. Rocky Raybell sends this picture from the Sherman pass in Washington: 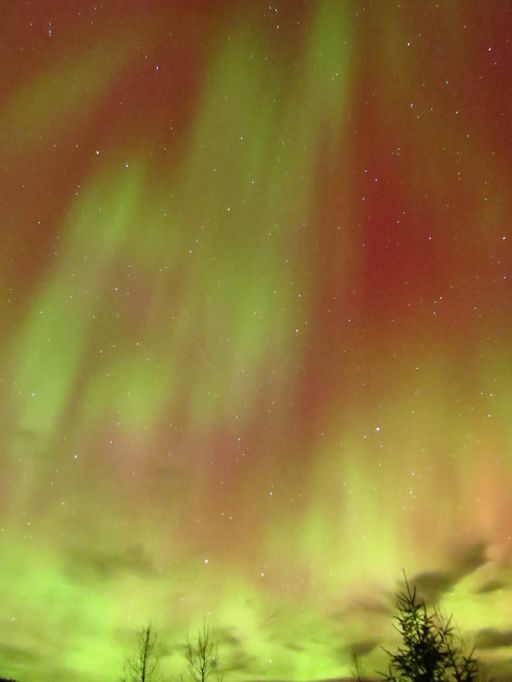 “Once they broke through clouds, the auroras were so bright, it was like a moonlit night,” says Raybell. “I could see active skies in all directions.”

And here I am in a southern state.  Wouldn’t ya know.

Whenever I travel I have the thought, “Is this when the next civilization crushing Carrington Event will take place?”   If it does, I hope I’m on a flight when it hits.

As I write, I received a text message that the Planetary K index is 8.

In my opinion, as a nation we ought to be “hardening” everything, not only because of a future Carrington Event (which is inevitable) but also because of possible EMP attacks (which given our (intentional?) degraded global standing over the last few years seems ever more likely).  Also, as individuals and families and smaller communities we ought to have an eye on being prepared for all manner of catastrophic change in societal conditions.  It is a commonplace, but true, that most people are 3 days away from having nothing to eat or drink.

Nature is a cruel and unforgiving teacher.  While we rely on the grace of God and His divine providence, we nevertheless must do our own part, if not for our own sake immediately, then for those who rely on us.

Make a plan and network.  Your efforts will never be wasted.

Fr. Z is the guy who runs this blog. o{]:¬)
View all posts by Fr. John Zuhlsdorf →
This entry was posted in Global Killer Asteroid Questions, Look! Up in the sky!, Semper Paratus, TEOTWAWKI, The Coming Storm and tagged aurora borealis, Carrington Event, CME, Coronal Mass Ejection. Bookmark the permalink.