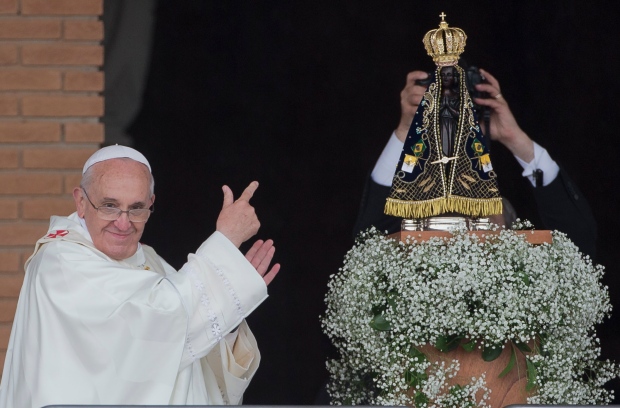 The AP piece details some of the criticism that the Holy Father has earned in the last couple of years.

I am reminded of speculation about the possibility that Francis might, like Benedict, resign, perhaps when he turns 80 next year.

A lot of people ask me if I think Pope Francis will resign.

As with most of what this Pope does… who knows? Maybe. He has hinted at it.

Were he to resign, I don’t think it would be at his 80th birthday. There is another, more likely scenario.

This Pope is very interested in Aparecida, both Our Lady of Aparecida of 12 October 1517, and the CELAM document issued after the big meeting there in 2007. The document of CELAM from Aparecida, and those from other meetings, seem greatly to have influenced Pope Francis.  (Of course 13 October 2017 will be the 100th anniversary of the final Fatima apparition and the “miracle of the sun.”)

So, were Francis to resign, I suspect that he would wait until the centenary of Aparecida in 2017 (a couple months before he turns 81). He would want to attend that ceremony as Pope. He would then return to Rome and, after the New Year of 2018, he would resign, after Epiphany, when Popes often consecrate bishops.

That would be my guess, were he really thinking about resigning.

In any event, were he to resign, it wouldn’t come like a bolt of lightning out of the blue, as it did with Pope Benedict.  What a day that was.

A lot of people also ask me that.  Honestly, I don’t know.   I have serious concerns about having two retired Popes around, much less one!  I also suppose it would make a huge difference what he does between now and his hypothetical resignation.  You never know.  He could still surprise us all.

In general Popes should not resign.  At least ideally, they should die in office.  On the other hand, in this age of modern medicine, it is possible to keep people alive long after they are sui compos.   Every Pope must now fear that and the inevitable power vacuum it would create. Resignation (or sudden death) would be better than the years-long death of a Pope who cannot rule in any way.  But that depends on the Pope!  Look at the example of life that St. John Paul gave us in his long-suffering to the end.

The years of our life are threescore and ten, or even by reason of strength fourscore; yet their span is but toil and trouble; they are soon gone, and we fly away. Ps 90:10

Popes change because of resignation (rare) and death (99.9%) either by natural causes or by murder.  Many of the early Popes were murdered, martyred, by enemies of Christianity.  Some later Popes were murdered too.  The way things are going today, it doesn’t tax the imagination much to posit assassination attempts against this Pope by Muslims. HERE The enemies of Christianity are on the rise.  And who and where are the biggest targets of all Christianity?  The Pope and Rome.

It’s horrid to think about, but we have to be smart and attentive and consider this possibility, not just for the Pope, but other Church leaders too.

Imagine were that – quod Deus avertat – to take place!  Were some Islamist plot to take out the Holy Father… would that galvanize the West to act in regard to Islamic jihad?  I’ll bet it would.  Martyr this super-visible, populist Pope?  The mind reels at the possible fall out.   I actually have the start of a novel that includes this scenario.  It’s about a fictional Pope, of course.  Two large trucks hurtle up the Via della Conciliazione during a General Audience. The Pope refuses to suspend audiences even in the face of credible threats.  The first truck takes out the barriers.  The second, with its enormous explosive load and hundreds of thousands of projectiles, smashes through the crowds like a ball through pins past the obelisk to detonate on the sacrato of the Basilica. Each day the conditions in the world are more and more resembling the scenario I first sketched out a few years back (yes, before this pontificate was even dreamt of).

Were Francis to resign while still relatively healthy for an octogenarian and at the height of his popularity then… what? Return to Argentina?  He would be a really interesting figure to watch, on the loose in the world, wouldn’t he!  ¡Hagan lío!

Whether he resigns or not is up to him in dialogue with his Maker. As I have written before, resign or not resign, this pontificate, like all others, is a parenthesis in God’s plan for us and His Church.  Most of us reading this will outlive Pope Francis and see more Popes in the years to come, unless Our Lord has some other plan.

That said, were Francis to resign sooner rather than later, I would be able to resuscitate the “REELECT BENEDICT” swag in my Cafe Press store! HERE and reassemble the Committee to Re-Elect The Pope.

So long as this Pope is the Pope, pray for him daily.  And please add a prayer also for Pope Benedict.

The moderation queue is, of course, ON.  Don’t bother writing anything if your intent is simply to bash Pope Francis.  I don’t want that here.

Fr. Z is the guy who runs this blog. o{]:¬)
View all posts by Fr. John Zuhlsdorf →
This entry was posted in "But Father! But Father!", Francis and tagged Pope Francis, resignation. Bookmark the permalink.