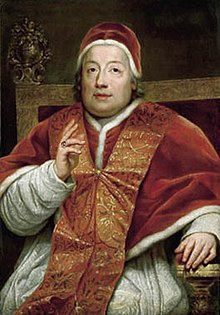 On 22 August 1764, during the pontificate of Clement XIII, at Campo de’ Fiori, the hermit Giuseppe Morelli was hanged, guilty for having “celebrated 29 Masses with consecration without being a priest and for received alms from the faithful.”

To those women our there who think that they are Catholic priests: this is serious stuff you dare to dabble in.

In our soft and squishy times, the Church doesn’t often tell you with clarity that you are in danger of Hell.

Let me help: If you are in the state of sin and/or under some kind of censure which prevents you from receiving the Sacraments, you still have time now, while alive, to repent and get back in harmony with the Church.

If you committed public scandal, set the record straight and, with a public statement, do more good with your conversion than ever you did with your defiance and scandalous actions.

Surely the terrifying prospect of hanging clarified Morelli’s values at the end.  But you, dear ladies who are pretending to be priests, don’t have any such harsh, immediate appointments on your schedule.  We have advanced in society in regard to the application of capital punishment.  But, in these comfy climes, haven’t we also lost view of our eternal salvation in the midst of our comfort and relative safety?  Hence, you need repeated, clear warnings.

It may be that a time of greater mortality, greater brutality and cruelty will descend on our O so civilized countries.  That would get people thinking about salvation pretty quickly.

Is that what it takes for us human beings?  Times of mortality and brutality?

We have to be disciplined in regard to the true state of our souls.

Ladies… repent while you still have breaths and heartbeats.

I include all who support this wrong-headed, spiritual dangerous notion.

Fr. Z is the guy who runs this blog. o{]:¬)
View all posts by Fr. John Zuhlsdorf →
This entry was posted in Deaconettes, Hard-Identity Catholicism, Liberals, Our Catholic Identity and tagged ordination of women, women priests. Bookmark the permalink.