Yesterday I posted about bad art, which is also in some cases blasphemous.  HERE

I don’t really care that much this time, since it concerns the official presidential portrait of the 44th POTUS, the 1st “gay” president, the single most pro-abortion president we have ever seen, who was ready to put the thumb-screws to the Little Sisters of the Poor to advance his culture of death, restriction of religion agenda: Barack Hussein Obama.

He, according to Maureen Mullarkey, chose “artist” – I use the term loosely – Kehinde Wiley.

I wrote with the “” above, because this one doesn’t seem to do much that is original.  He take famous works and screws with in blatant identity politics.  Ho hum.

Wiley has, however, also mocked religious images, such as the famous marble of the dead St. Cecilia, the Lamentation of the Dead Christ by Mantegna, placing figures in typical stained-glass frames, etc.

Anyway, this is soooo fitting for Obama.

Frankly, I think one of the best portrayals was this. I posted that quite a few times during those sad 8 years.

Coincidentally, Wiley did this of Ice-T.  On the left is David’s Napoleon. 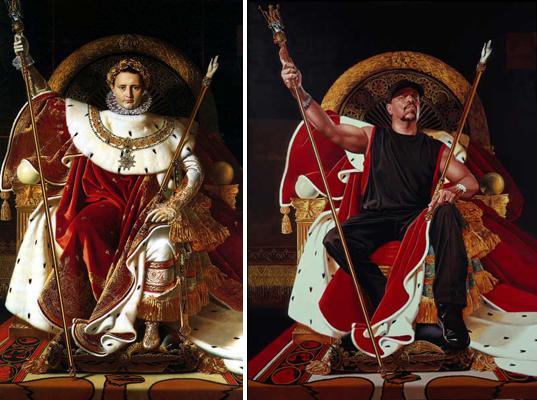 Yes, artists borrow from each other across all ages.  But… really?

That isn’t the only example.  Maureen posted a few.  Check them out.

Search online for his images.  I think you’ll find them boring after the first few seconds of putting drops in your eyes because of the colors.

I expect Obama’ portrait – he’s doing Michelle too (I could offer suggestions as to what famous work he could imitate for that one) – is every bit as unoriginal and cliche as this artist has proven himself capable of crafting.

That presidency deserves a couple final splats, and I don’t mean a la Jackson Pollack.

Fr. Z is the guy who runs this blog. o{]:¬)
View all posts by Fr. John Zuhlsdorf →
This entry was posted in What are they REALLY saying? and tagged Barack Obama, Kehinde Wiley. Bookmark the permalink.