Brick by brick in @archstl – a lesson in commonsense, prayer and elbow grease

There are entirely understandable reasons why not every church can be grand and beautiful.  For example, sometimes a church is needed quickly and the means are slim.  In many cases, however, a little creativity and a touch more patience – along with belief in God – could have taken the slim means and done more.

And then there are the churches that we beautiful and they were wreckovated.

And then there are the churches that weren’t beautiful and they were, and are, upgraded. 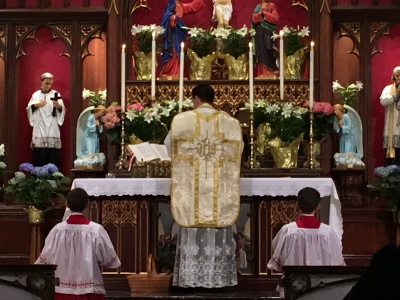 There is a charming tale told at St. Louis Review about the upgrading of a rather ho hum, but typical parish church.

I give strong Fr. Z kudos to the pastor Fr Raymond Hager of St. Barnabas the Apostle in O’Fallon, MO.

Yes, O’Fallon.  I, too, recognized that town’s name because we have read about what’s going on there before.   Back in 2015 I posted about how the same priest implemeneted Summorum Pontificum.  HERE

Back to the story at hand… let’s see what Fr. Hager is up to now, with my classic red and black treatment:

Sanctuary makeover is an extraordinary work of art

With a jar of gold latex paint in hand, Father Raymond Hager carefully applied the finishing touches to a 5-foot statue of St. Barnabas. Within a matter of weeks, the figure was transformed from a solid piece of acacia wood to a work of art.  [It can be done!]

This certainly wasn’t the first time the priest witnessed something transform from ordinary to extraordinary.

St. Barnabas Parish in O’Fallon recently underwent an extreme makeover, with a major remodeling of its sanctuary. Included in the transformation is a newly constructed wooden altar, statues, reredos, communion rail, [Essential!] ambo, side shrines and new marble flooring, made possible in part by help from parishioners and donations.  [Develop a vision, point the way, get it moving, bring it to completion with elbow grease and grace.]

Best of all, said Father Hager, people have commented positively about the church’s new look. “One of the best compliments we got were people who said, ‘Father, it looks like it’s always been here.’”  [I’ll be they also say that it now looks more like a church.”]

Plans for the transformation began last summer, when Father Hager recognized the need for a new communion rail.  The priest has been offering the Traditional Latin Mass at 10 a.m. Sundays since January 2015. Scheduled between two English-language Masses, they “were starting to run together,” he said.

A longer communion rail was needed to accommodate more people at the Latin Mass. Some Sundays, the Latin Mass is the most well-attended, with an average of 150-200 people, largely younger families. They have contributed to a rejuvenation of the parish, he added.  [Dat’s what I’m talkin’ ’bout!” Remember the story of St. Mary’s in Pine Bluff, WI?  The pastor goes ad orientem and puts in a Communion rail.  Within a few months, everyone is kneeling for Communion at the Novus Ordo Masses.  The average age dropped through the floor.  It’s like day care in there sometimes.]

Father Hager worked with Brendan Hamtil, owner of Fynders Keepers Brokerage of Stilwell, Kan., a company that links buyers and sellers with religious goods, to find a communion rail. Hamtil located one, along with a matching ambo, from a now closed church in Connecticut.

“Things just kept falling into place, one thing after another,” Father Hager said. “I was praying about it, not only what would be best for the parish but also what God wanted.”

The other centerpiece of the sanctuary is a rood screen (a large wooden screen used in medieval times to separate the nave of the church from the sanctuary), which Hamtil found at an old Episcopal church in Maine. A carpenter and parishioner, Ted McCullough, transformed it into a reredos with niches for statues, Crucifixion scene and a place for the tabernacle.

The custom altar was constructed by Corey Clark of Clark Carpentry and Woodworking LLC, of Berlin Township, Mich., and designed to match the rest of the woodwork in the sanctuary.

Hamtil of Fynders Keepers also connected Father Hager with a studio in Italy to create the 5-foot statues of St. Barnabas and St. Louis. The priest, a former draftsman and fine arts enthusiast, was assisted by artist Linda Smith of St. Joseph Parish in Cottleville and Darlene Hartman of St. Barnabas in painting the statues.

It’s a craft he’s learned over time, dating to his seminary days, when he rescued a dilapidated statue of St. Aloysius Gonzaga and restored him. “I really didn’t know how to do a lot of this stuff,” he said. “I just prayed. And I was helped on how to do it. It all just kind of came together.”  [Fabricando fabri fimus, right?]

God bless that priest and his people and a supportive archbishop.

Fr. Z is the guy who runs this blog. o{]:¬)
View all posts by Fr. John Zuhlsdorf →
This entry was posted in ¡Hagan lío!, "How To..." - Practical Notes, Brick by Brick, Fr. Z KUDOS, Just Too Cool, Liturgy Science Theatre 3000, Mail from priests, Our Catholic Identity, The future and our choices and tagged communion rail, renovation.. Bookmark the permalink.