Some good news from Montana, a laugh, and some reactions to Paul VI canonization 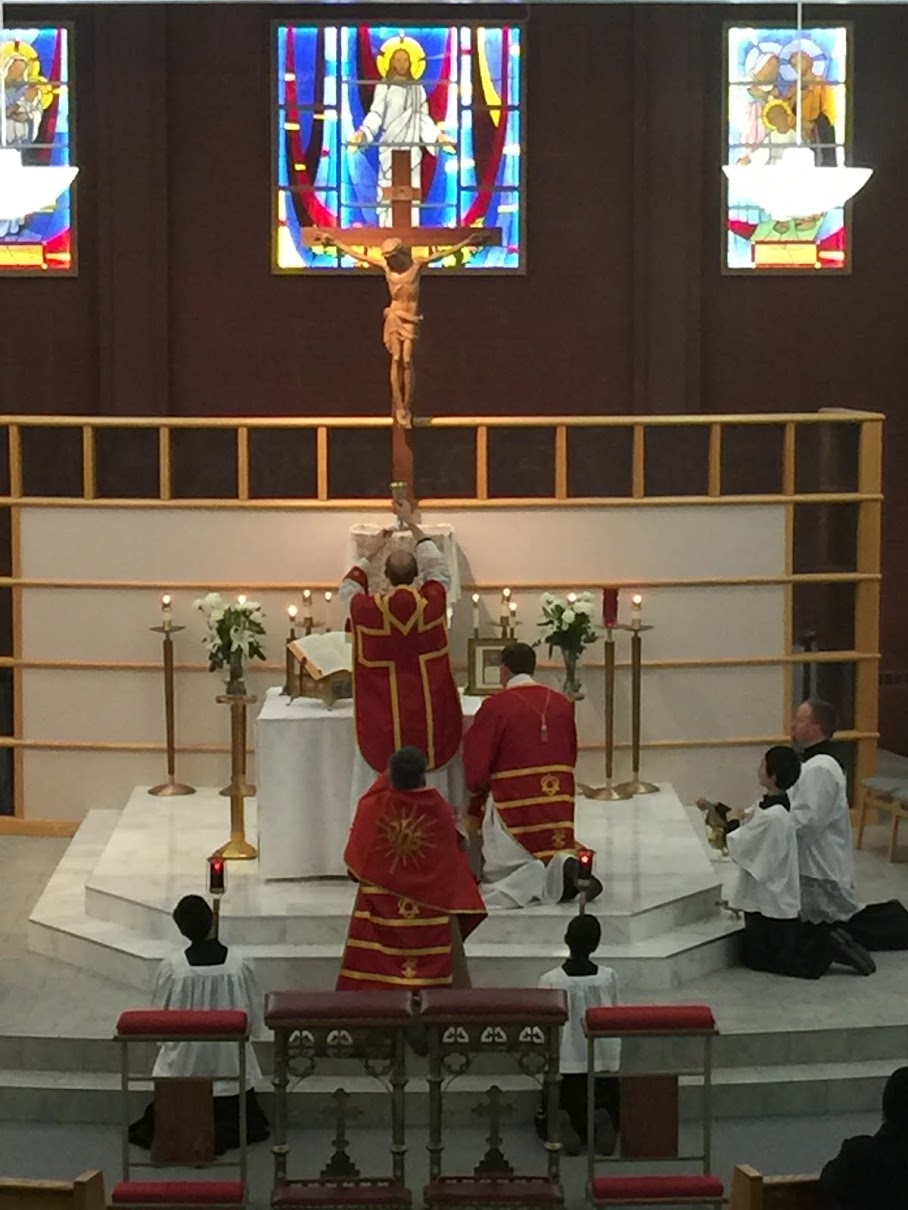 One of the new parishes is Corpus Christi (a consolidation of St. Luke’s, St. Joseph’s, and Blessed Sacrament). The pastor, Fr. Ryan Erlenbush, says all Masses ad orientam and in Latin. The Novus Ordo Masses are said in Latin, and the parishioners are taught the Latin responses. Just thought you might be interested.

Ad orientem is needed more than ever.  In many places it will be a first (or third) step toward recovery of our Catholic identity.

I’d very much like to visit that place sometime.

And then there’s this.

From Eye of the Tiber: 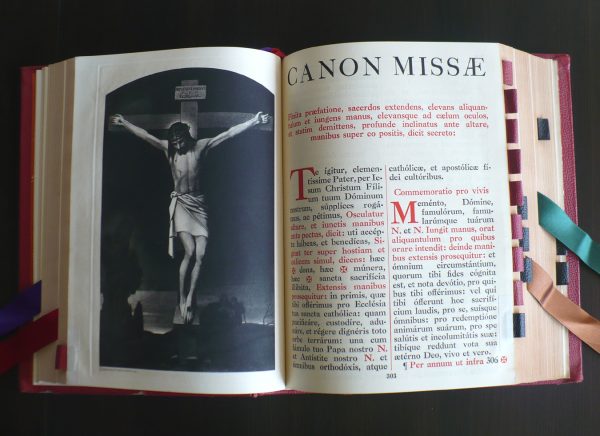 he black in his missal during Mass, local color blind priest Father Richard Wendell asked congregants to try as best as they can to just ignore him.

“You gotta feel for the guy,” local parishioner Brenden Horn told EOTT after Mass. “At one point he said, ‘Kyrie eleison. the Gloria is omitted on Sundays in Advent and Lent. Stand at High Mass. Gloria in excelsis Deo.’ Yeah, it was painful to watch.”

At Fr. Z’s Blog we are famous for liturgical diversity if we are famous for anything at all.  I think that as on demand publishing technology changes, we should be able to craft missals for the color blind which are tuned to the precise shades of color needed for celebrants.  Alternatively, perhaps the rubrics could be underscored or provided in a different typeface.

Francis presided at a canonization ceremony for Paul VI on 14 October.

Reactions vary.   Some are over the moon with Team Francis Joy.  Others are harshly critical.  Most sort of shrug.

At First Things there is a piece by Jake Neu – “Paul VI and the Canonization of Vatican II” – which has two illuminating paragraphs.  My emphases:

Of the three canonized popes who reigned in the years 1958-2005, Paul VI is the one most directly tied to the implementation of Vatican II. He oversaw the issuance of its most important and influential documents. He was responsible for implementing its reforms for the ensuing thirteen years. Unfortunately, he failed to promote a standard interpretation of Vatican II, allowing broad confusion as to what exactly the Council permitted. He exercised little control over the Curial departments involved with the reforms. Though Humanae Vitae courageously and indispensably reaffirmed the Church’s ancient teaching on contraception, the reception of that encyclical so scarred Paul that he refused to write another for the last ten years of his pontificate. Despite reports of widespread and grave emotional and psychosexual problems in the clergy as early as 1972, Paul VI did nothing to address such concerns or instruct bishops on the proper handling of abuse cases. In 1985, Cardinal Joseph Ratzinger lamented that the period after the Council seemed “to have passed over from self-criticism to self-destruction” and had hardly “live[d] up to the hopes of John XXIII, who looked for a ‘new Pentecost.’”

By canonizing John XXIII, John Paul II, and Paul VI, Pope Francis is embracing Vatican II and the changes it wrought in religious practice, devotion, the liturgy, administration, external relationships, and general outlook. Francis has expressed that these canonizations reflect a new age of openness to the Spirit brought by Vatican II. Yet given the institutional failures and instability that pervade the last sixty years, the frequency of post-Vatican II papal saint-making may be viewed not as a mark of vitality, but rather as an effort to assert the value of Vatican II in the face of the Church’s potentially permanent decline.

Something needs to change, wouldn’t you agree?

Let’s say you are in Chicago and you want to drive to New York City.  You get into your car and head off.  However, after a while you see an exit for Kansas City.  You might get the idea that you’ve been going the wrong way.  If you really didn’t care all that much about NYC and are okay with KC, well, who cares.  If, however, you really did want to go to NYC, then your best option is probably to stop driving in the wrong direction, turn around and retrace your route to the point where you went wrong and then start over.  That is, if you care.

I suppose we could use another analogy.  Say you want some fresh air in your house.  You throw open the windows and prepare to breath deeply.  However, in the next county there is a bad forest fire and you get a strong does of smoke.  Not refreshing at all.  Do you say, “Oh well!”, and walk away leaving the windows open?

On the 9th anniversary of his coronation (he was the last Pope to have one) on 29 June 1972, Paul VI described the situation in the Church.

Saint Paul VI, pray that the smoke of Satan which entered the Church may, by your intercession, be driven back. Pray that the the whole Church may hear with docile obedience the moral teachings which, handed down by your predecessors, you handed down to our generations. Pray especially for your successor Pope Francis, that, with the help of the Holy Spirit, he may devoutly, powerfully, and joyfully set forth the tradition received through the Apostles, the Deposit of Faith.

If Paul wasn’t particularly successful as Pope, which is a horrifically complicated job in the best of times, and he did not by any stretch of the imagination have even okay times, he could, perhaps, exert himself on that side of the divide in a “clearing of the air”.

Peter Kwasniewski at OnePeterFive is decidedly not over the moon about Paul VI.  He penned closely argued piece against the canonization.  HERE  One of the things he said caught my attention:

There is no serious cultus of Paul VI, nor has there ever been, and it is doubtful that papal fiat can create a cultus ex nihilo.

Part of the process for causes of saints is that it must be demonstrated that there is a real, sustained, growing “cult” or devotion to the Servant of God.

What does the SSPX think?  Let’s read their statement HERE

The Priestly Society of Saint Pius X reiterates the serious reservations it had expressed during the beatification of Paul VI on October 19th, 2014:

— These beatifications and canonisations of recent popes, with an accelerated procedure, dispense with the wisdom of the Church’s centuries-old rules. Is not their aim more to canonise the popes of the Second Vatican Council, rather than to note the heroicity of their theological virtues? When one knows that the first duty of a pope – successor of Peter – is to confirm his brethren in the faith (St Luke 22:32), there is a good reason to be perplexed.

What the rest of the Communiqué stresses is how many bad things happened on his watch and how he did nothing to stop them.

That does raise an issue: Can one divorce the fruits of a Pope’s pontificate from how he lived he vocation as Pope?  If, one your watch, things fly apart because of your decisions or else because you didn’t correct them, then can it truly be argued that you have properly exercised the auriga virtutum, the virtue of prudence?   Prudence is the virtue which governs the other virtues.  Prudence disposes reason to determine the true good in different circumstances and then to choose the right path to achieving the good.   By prudence we take counsel with ourselves and with others so as to be properly informed, we then make correct judgments based on the evidence we have, and finally direct our efforts according to the judgments made.   Some would say that the fruits of Paul’s pontificate show that he didn’t exercise well the virtue of prudence.  If he didn’t then he didn’t live a life of “heroic virtue”.  That would be a problem for a cause for beatification.   However, the Congregation issued a decree on that.

Anyway, it seems to quite a few people that the canonization of Popes of the 20th c. seems, in fact, to be a canonization of their policies, or rather, the policies of the holder of the See at the time.

Along these lines Jesuit Thomas Reese writes at ultra-lib RNS:

I find this rush to canonize recent popes unseemly at a time when the church needs to showcase lay examples of holiness to inspire ordinary Catholics in their lives. Canonization is often an attempt to put a halo over all the activities of a pope. For example, conservatives have noted that Pope Paul’s canonization takes place on the 50th anniversary of the publication of Humanae Vitae.

Anyway, those a few of the not-so-hot reactions to the canonization.  Time will tell (if it hasn’t already) whether devotion to him will grow and be stable.

Fr. Z is the guy who runs this blog. o{]:¬)
View all posts by Fr. John Zuhlsdorf →
This entry was posted in "How To..." - Practical Notes, Lighter fare, Liturgy Science Theatre 3000 and tagged Fr. Ryan Erlenbush. Bookmark the permalink.