Surviving and thriving in the Demographic Disaster we face as a Church. Wherein Fr. Z rants. The article I read at Crisis, to which I will soon turn my attention below, has the ring of truth.

But first, some scene-setting.

In these USA, we as a Church are like band of adventurers on the march towards a long-desired destination.  We have swamps and storms and enemies to face at every turn.  Sometimes we are forced on horribly high and perilous paths only to find tenuous bridges over chasms heading towards tunnels filled with orcs or forests with hypnotic spiders.  The voyage takes its toll on our numbers.

And, soon, a big drop in numbers will result when the inevitable battle takes place.  A heavily-armed force named Demographics is coming at us from the other direction.  We will soon collide.

The number of people saying they are or pretending still to be Catholic will soon plummet.  The number of diocesan priests and religious will shrink as the Biological Solution catches up to presbyterates and orders.

This is the state of the question after decades of both purposeful and systematic corrosion of Catholic identity as well as erosion through neglect and incompetence.  Europe is worse and Latin America is incomprehensible.

When the demographic collision happens, and it will, only the strong and disciplined will survive.

Right now, who are the strong?  Traditionalist Catholics, for sure, and probably also those of a more charismatic bent.

Those who are attracted to traditional worship are strong, hard-identity Catholic.  They are young and they are having lots of children.  Back in the day, friends would say to me that the Novus Ordo would fade away and all that would be left would be the TLM.  I pretty much scoffed at that claim… then.  Now, I’m not so sure.  Look at the demographics.  Also, strong, are those next-generation young people who have inherited a saner and sounder charismatic approach.  They pray the Rosary and attend Eucharistic Adoration.  They are informed and they love the Faith.   Among seminarians these days a high percentage are open to or eager for tradition, even to the point where the bumfuzzled swotters on the Left are ringing their hands.  The religious orders attracting postulants are imbued with Tradition.

When the wreckage is sorted, I think these two groups – charismatics and trads – will be well-represented among the survivors.

Yes, some nasty critters will survive, too. They always do.

And, the charismatics and the trads are also, it seems, to me, being drawn into the same path through the gravitational pull of which I have written many times over the years.  More on that to come.

Now to the article I mentioned at the top.

At Crisis – of increasing value – there is a piece by James Baresel entitled: “Will Catholic Charismatics Embrace the Latin Mass?”

My considered opinion is, yes. They will.

Determining how much of a broad trend such examples represent is at best difficult. And there is no denying the existence of an intra-charismatic dispute between those friendly to the old liturgy and to ritual formality and those who idealize effusive spontaneity. But the fact that the former attitude has a strong foothold among leading figures and institutes of the charismatic movement, and a stronger one among the younger generation than among the older one, seems to indicate that support for the old liturgy and ritual formality is likely to at least slowly spread within the charismatic movement as time goes on.

Baresel explains why he thinks this will happen.  Along the way he explains a trend in the charismatic side.

You would do well to go over there and read the whole thing.  Before you do, however, I’ll add another point.

Baresel admits that his experience is anecdotal.  Okay.  The plural of anecdote is “data”.  I’ll add some data of my own that dovetails with what he wrote.

Baresel happened to mention Franciscan University at Steubenville and several people who have seemingly moved toward traditional worship.  He wrote:

“Through them I learned that Ralph Martin, one of the charismatic movement’s founders, was entirely receptive to those who wished to embrace the old liturgy. “

I was recently at a conference for priests held by the St. Paul Center for Biblical Theology run by Scott Hahn, et al.  It was terrific.  Of course there was a degree of Steubenvillianism in it, as you might imagine.  You would think that many of the priests attracted to such a conference would perhaps be on the more liberal side of liturgical worship.   I think that was the case with older guys: you can tell a lot from the style of their albs and stoles when they concelebrate (which I did not).

But the younger priests…! During the course of the conference dozens of them introduced themselves and said that they read this blog and that it was helpful in this or that way.  They wanted to know how I worked it out with the organizers to celebrate the TLM, etc.  They talked about what they are doing in their parishes: quiet forward movement toward traditional worship with real successes.  They were solid, zealous and pragmatic.  This, in an event that came out of a certain milieu.

One of the speakers at the conference I attended was none other than the aforementioned Ralph Martin.   He now teaches at Sacred Heart Seminary in Detroit.  Moreover, I know that for years many students at Steubenville have desired and attended the TLM, one way or another.

Look.  There are also market forces at work here.  As demographics shift in the Church, lots of people who have written books and speak and teach see what’s going on and they adapt.  I am in no way suggesting insincerity.  They are genuine and they are learning and being influenced by what they learn.  Believe me!  As a convert – and the impact of converts on the Church today is huge – I get it.  And by convert I mean both formal and interior, reverts and those who have had ongoing deepening of the gift they were given from their families.  Conversion must be ongoing if it is truly conversion and not just role-playing (aka hypocrisy). It takes a long time to convert.  As a matter of fact, it lasts until your final breath.  And there is a great deal to discover in Holy Church’s treasuries. 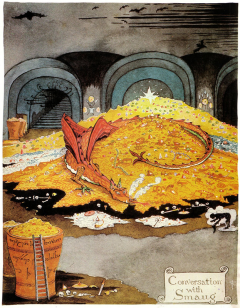 Coming into the Catholic Church, or recommitting, is like coming into a vast store of riches, like finding the hoard hall under Erebor, the Lonely Mountain.  Imagine the time it takes to explore it and benefit from new discoveries.  A small band, converts all in the large sense, enter in wonder.  Some track in one direction in the great cavern and find this or that treasure while others clamber off in another direction.  Eventually, after one awesome revelation after another, they come together again and point and say to each other simultaneously: “You have GOT to see what I found over there!”

The treasury, by thy way, has been guarded by a dragon who wants to keep it away from all of us.

Let’s beat the dragon, claim the treasure, and together build what it can build.

Fr. Z is the guy who runs this blog. o{]:¬)
View all posts by Fr. John Zuhlsdorf →
This entry was posted in The Coming Storm, The Drill, The future and our choices, Wherein Fr. Z Rants and tagged charismatics, demographics, gravitational pull, Ralph Martin, Steubenville, traditionalists. Bookmark the permalink.