The Lion of Hong Kong

A warm tip of the biretta to our friends at Rorate for the following from UCA News about one of WDTPRS’s favorites, His Eminence Joseph Card. Zen Ze-kiun, the great Bishop of Hong Kong. 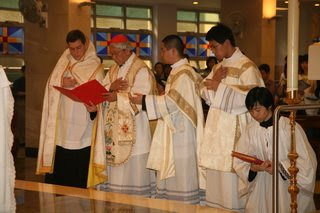 HONG KONG (UCAN) — Cardinal Joseph Zen Ze-kiun of Hong Kong has called for bishops in mainland China to courageously fulfill their responsibilities to the Church, saying compromise cannot last forever.  [In many spheres, compromise is one of the real threats to the Church and our souls.]

The cardinal made the call in his article in the Jan. 4 issue of Kung Kao Po, the diocese’s Chinese-language weekly. [I would love for some Chinese speakers to comment on what is going on. My Chinese is not yet good enough to drill into this.] On Dec. 24, he had announced to local media that Pope Benedict XVI had agreed to let him retire in the first half of 2009, [how sad] although the date of retirement has yet to be announced, and that he would focus on China Church affairs.

In his article, “Inspiration from St. Stephen’s Martyrdom,” [Okay… you know something tough is coming when Card. Zen starts talking about St. Stephen.] the cardinal reviewed developments since 2006 and made an appeal to his “brothers in mainland China.”

“Don’t be afraid. Bear the responsibilities that history has placed upon you! In this critical moment, your choice could revive the Church or it could let her languish for a long time,” he told mainland bishops.

“You are held accountable to history and you must be prepared to stand firm without blemish before God’s judgment,” he continued.  [Yes!  We will be judged.]

His call was prompted by anticipation that Vatican-approved bishops in the open Church might participate in the election of chairpersons of the government-recognized Chinese Catholic Patriotic Association (CCPA) and Bishops’ Conference of the Catholic Church in China (BCCCC) during the next National Congress of Catholic Representatives.

The national congress, the highest self-governing body of the CCPA and BCCCC, is supposed to be held every five years.

Bishops The sixth congress elected Michael Fu Tieshan to head the CCPA in 1998, and the seventh elected Joseph Liu Yuanren of Nanjing to head the BCCCC in 2004. Neither prelate was recognized by the Vatican. Their posts have remained vacant since Bishop Liu died in 2005 and Bishop Fu in 2007.

No national congress has been announced, but the government-approved "open" Church celebrated in 2007 the golden jubilee of the founding of the CCPA, and in 2008 the jubilee of the “self-election and self-ordination” of bishops.

The China Church began illicit episcopal ordinations in 1958. Since then, there have been about 170 "self-elected, self-ordained" bishops in China.

The prelate also pointed out that some “learning sessions” appear to have taken place, seemingly in preparation for the congress.

“Must the meeting take place?” he asked. “Is it not an insult in response to the pope’s letter to Chinese Catholics – or perhaps you could call it a slap on his face – if (bishops are) joining such a meeting?”  [papale papale!]

More directly he asked mainland clergy, “Does your conscience allow you to do that? Would the people of God accept such behavior from you?”

Cardinal Zen encouraged the mainland bishops to follow the example of the first Christian martyr, Saint Stephen, assuring that being open about their stance would not result in “total loss.”

In his article, the cardinal quoted an unidentified person telling the "underground" clergy that compromise was wise, because “we are in communion with the pope and recognized by the government, and can take care of the Catholics.”

“Instead, you prefer staying in jail, sacrifice your lives, and so your faithful are abandoned without anyone to take care of them,” the unnamed person reportedly said.

However, “compromise is compromise,” the cardinal warned. “It cannot go on forever.”

“One should not give up the truth of faith forever for the sake of evangelization,” he stressed.  [A tough choice.  Timing is everything.  Think of Ostpolitik and its results.]

With regret, he said more than a dozen Vatican-approved bishops in the open Church had taken part in three ordinations conducted without Vatican approval in 2006.

On the contrary, 2007 contained “a ray of hope,” since the Vatican convened a meeting on the Church situation in China, and the pope wrote his letter to Chinese Catholics. The CCPA 50th anniversary celebration in July 2007 could be described as the “aftermath of the era before the papal letter,” Cardinal Zen remarked.

By now, however, all should have digested the content of the papal document, he wrote. That is why participating in “self-election and self-ordination” celebrations of bishops in December 2008 “made one feel perplexed.”

The Vatican sent another letter to encourage bishops to stand behind the pope’s teaching, Cardinal Zen added.

That letter, signed by Cardinal Tarcisio Bertone, Vatican secretary of state, on April 22, 2008, was addressed to all Vatican-approved bishops in mainland China.