Prince Charles the environmentalist: “Follow the Islamic way to save the world”

A reader alerted me to his wacky tale from the Daily Mail. 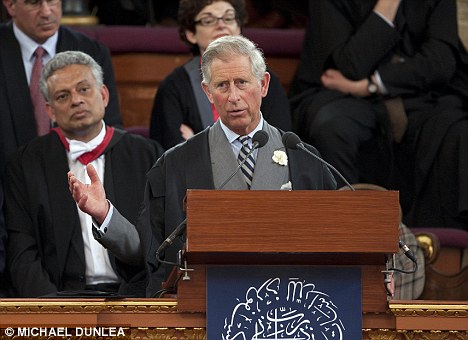 ‘Follow the Islamic way to save the world,’ Prince Charles urges environmentalists

Prince Charles yesterday urged the world to follow Islamic ‘spiritual principles’ in order to save the environment. [I am curious to know what those principles are and why they would be superior to true Christian theology of our stewardship of creation.]

In a high-profile speech, the heir to the throne [future head of the Church of England?] argued that man’s destruction of the world was contrary to the scriptures of all religions – but particularly that of the Islamic faith. [How?]

He said the current ‘division’ between Man and Nature had been caused [get this…] not just by industrialisation, technological development and the relentless pursuit of economic growth, but also by our attitude to our relationship with Nature – which goes against the grain of  ‘sacred traditions’.  [Christians track this back to sin… Original Sin in particular.]

Charles, who is a practising Christian, spoke in depth about his own study of the Qu’ran which, he said, tells its followers that there is ‘no separation between Man and Nature’  and says we must always live within Nature’s mean and limits.  [What I sense is at work here is that somewhere along the line he swallowed the error that man is not part of "nature".  He is therefore impressed by a religious assertion that man is in fact part of nature.   This is not new to well-informed Christians, of course.  Catholics especially grasp this.]

‘From what I know of the Qu’ran, again and again it describes the natural world as the handiwork of a unitary benevolent power,’ he said.  [Imagine such an idea!  God created nature!]

‘It very explicitly describes Nature as possessing an “intelligibility” [didn’t Augustine have something to say about that?] and that there is no separation between Man and Nature, precisely because there is no separation between the natural world and God. [Oppps!  God entirely transcends the natural world, which entirely depends on God for its existence.]

‘It offers a completely integrated view of the Universe where religion and science, mind and matter are all part of one living, conscious whole. [I am reminded of a high schooler who has discovered an interesting new idea.]

‘This suggests to me that Nature is a knowing partner, [Sounds like pantheism…. a reflection of a modernist.] never a mindless slave to humanity, and we are Her tenants; God’s guests for all too short a time.’

The prince was speaking to an audience of scholars at the Oxford Centre for Islamic Studies, which attempts to encourage a better understanding of the culture and civilisation of the religion, of which he is patron.

When he accepted the role back in 1993 Charles gave a landmark speech about the need for better understanding between Islam and the West, which still has resonance today.

Yesterday the theme for his lecture, to mark the centre’s 25th anniversary, merged religion with his other favourite subject – the environment.

The hour-long speech saw Charles once again berate Man for the damage he is doing to the planet, saying: ‘Many of Nature’s vital, life-support systems are now struggling to cope under the strain of global industrialization. [He should perhaps save a few comments for British Petroleum.]

Ho hum.  You can read the rest of the stuff over there, if you care about this ramblings.

We probably need a more clearly articulate ecological theology, something in small booklets with simple explanations.

Fr. Z is the guy who runs this blog. o{]:¬)
View all posts by Fr. John Zuhlsdorf →
This entry was posted in SESSIUNCULA and tagged Prince Charles. Bookmark the permalink.