Archbp. Nienstedt on being Catholic

USAToday has an article on Archbp. John Nienstedt of St. Paul and Minneapolis: 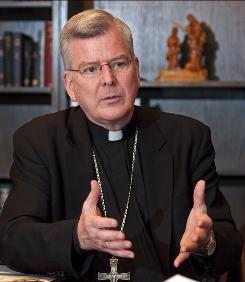 ST. PAUL (AP) — The Catholic archbishop for the Twin Cities defended his right Monday to speak to fellow Catholics on social issues, and said a shrinking Roman Catholic church is no reason to consider a more liberal stance. [Which should apply also to issues that don’t directly concern morals.]

Archbishop John Nienstedt sat down with The Associated Press after a weekend in which the St. Paul-Minneapolis Archdiocese announced it would close 21 churches to reflect churchgoers’ move from urban areas to suburbia, declines in regular church attendance and an expectation of fewer new priests to replace those who retire or die.

The archbishop, who recently angered some of the area’s 800,000 Catholics with the mailing of an anti-gay marriage DVD, [Does this reveal a bias in reporting?  It could have been written “encouraged some of the area’s Catholics”.] said he believes spiritual leaders have a duty to talk to their flock about issues they see as important — even if some of those views might be unpopular with prospective churchgoers.

“We’re part and parcel of the culture, [though not in an unqualified way] so it’s important for us to be involved with those discussions and have our say,” [Do I hear an “Amen!”?  This is what WDTPRS has been talking about incessantly.  There are powerful forces trying to drive the Church with her voice out of the public square.  We must not surrender that ground.  We have a right to be heard.] Nienstedt said. He said Jesus Christ directed his followers to “either be hot or cold, but if you’re lukewarm, I don’t want that. So we want people who live their faith.”

Nienstedt called the reorganization, which also will involve dozens more churches sharing priests and some staff and resources, “a reconfiguring of resources to meet our needs and mission.” But he said Catholics need not fear a smaller church, and the threat of one is not a reason to abandon core tenets.

“I believe that it’s important that if you’re going to be Catholic, that you have to be 100% Catholic,” [Do I hear an “Amen!”?] Nienstedt said. “That you stand by the church, you believe what the church believes and you pass that on to your sons and daughters and your grandsons and granddaughters.”

The Rev. Mike Tegeder, lead pastor at St. Edward Catholic Church in Bloomington and a frequent critic of the archbishop, said he was puzzled [I am sure he would be puzzled.  When it comes to the Faith it is hard to understand things you don’t believe.  Nisi credideritis non intelligetis.] by the term “100 percent Catholic.” [Great witness, Tegeder.]

“The church has always gotten into trouble when it seeks to separate the pure from the impure,” said Tegeder, whose suburban congregation emerged unscathed [pity] from the reorganization plans. “Jesus cautions us to be careful in weeding and judging.”

Tegeder and some other priests have argued the Catholic Church could quickly resolve its problem with declining numbers of priests if it allowed married clergy. But “I personally don’t see that happening,” Nienstedt said.

One church on the list of those to be closed and merged with several nearby churches is St. Clement, in Minneapolis. its pastor, the Rev. Earl Simonson, said he’s not sure if the building will actually shut down or still be used for some services, though under the archdiocese’s approach it will at minimum lose its name. [Ummm…. perhaps the parish will be suppressed, but a church cannot lose the name it was consecrated with unless approval is obtained from the Congregation for Divine Worship.]

“We just wait for the great archbishop to tell us what we’re doing,” Simonson said. “We’re mere flunkies.” [That’s not bitter.]

Still, Simonson did not take issue with Nienstedt’s conviction that smaller isn’t necessarily less desirable for the Catholic Church.

“That’s what I was taught in seminary,” Simonson said. “If you don’t want to be Catholic, then get out. The archbishop is right about that. Human nature being what it is, you’ll always have some who think they can be half in and half out.”

It must be a horrible decision to close parishes.   It leads one to question whether or not it is time to think outside the box.

Fr. Z is the guy who runs this blog. o{]:¬)
View all posts by Fr. John Zuhlsdorf →
This entry was posted in New Evangelization, Our Catholic Identity, The Drill, The future and our choices. Bookmark the permalink.