First, another plea for free advertising.

Thanks again for everything from last week. If it’s not too much, I’m hoping to ask a favor from you: a friend and I are starting a new blog that’s all about the Sacred Heart devotion. We’re both twenty-something converts from Protestantism, and we’re both really passionate about how much devotion to the Sacred Heart has affected our spiritual lives. […]

Is there any chance you could help us spread the word? The site is at:

Yet another plea for free advertising.  Goodness gracious, friends!  I take ads, you know!  But this is from Fr. Joseph Lee, FSSP and it is for my brothers out there who MUST start learning the older form the of Roman Rite – as is incumbent upon them:

I hope you were able to get some rest this summer. [What’s that phrase about rest and the wicked?]

Just a note for any interested priests that our next Low Mass Training will be from 16-20 December 2013 at Our Lady of Guadalupe Seminary. More information can be found at http://fssptraining.org/.

At the site of Acton Institute there is a great post about the Perils of Prosperity, which I think is one of most important factors in the decline of a religious sense today.

So Why is Sustained Prosperity a Peril? Nearly everyone on earth prefers a life free from poverty and from the need to focus on survival. Call it liberty or call it comfort, everyone prefers this life. Now nearly 2b people enjoy that level of living thanks to the growth of economic freedom. But there are problems.

We must be very careful of prosperity. It has a way of deluding us into thinking that we can afford anything and that we can absorb any shock. For seven decades this has been true. But now we have changed our thinking and our planning and our savings as we ignore the possibility of real economic disaster: Beware.

Over the pond in Ol’ Blighty the situation is looking grim for girls.  A reader sent a note asking for support through a “like” campaign on Facebook.  It’ll take you a few second to help:

Over in the UK the Crown Prosecution Service have decided that illegal gender selective abortions should not be investigated because, apparently, ‘it is not in the public interest’ to do so.

I was pleased to see that a small Facebook page has been started for those who disagree. I encourage you to register your support. www.facebook.com/genderselectionuk

I just saw the Lycurgus Cup at the Art Institute in Chicago.  It seem that it has much in common with The Borg and nano-technology:

I have to get back to Chicago to see the Impressionism exhibit.

And just to prove that not everything Pope’s say is infallible, Pope Francis called the late Carlo Maria Cardinal Martini, SJ, “a father for the whole Church“.  Color me a dissenter. 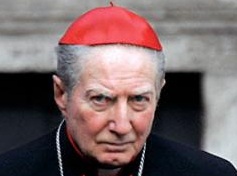 POP QUIZ: Where is the only place in these USA where the Church has affirmed an apparition of the Blessed Virgin?  HERE

(I find that site’s name amusing because I had that domain name before this new site got it.  I let it go some years ago.  Funny how that works out.)

And we think we have problems… via Eponymous Flower:

Vietnamese Police Crush Catholic Protest With Brutal Violence
Edit: here’s the translation of Katholisches. Usually, it’s on Asianews, but since they haven’t translated it into English yet, here it is:

(Hanoi) The Vietnamese police attacked a peaceful rally of Catholics in the parish of My yen. With batons, electric pulse weapons, tear gas and shots in the air with live ammunition, the Vietnamese police took action against several hundred Catholics who were demonstrating for the release of two parishioners. The two Catholics are in prison without charge since June. According to witnesses, it was one of the bloodiest and most brutal of anti-Christian police actions in recent years.

Finally a video about funny stuff that happens to babies… that babies do themselves…. that babies… heck… just watch.

This reminds me of what we must look like to our Guardian Angels.

It also reminds me about how we learn and, indeed, that we are tougher than sometimes we think we are.

Have a great weekend.

Fr. Z is the guy who runs this blog. o{]:¬)
View all posts by Fr. John Zuhlsdorf →
This entry was posted in SESSIUNCULA and tagged Omnium Gatherum. Bookmark the permalink.