When an organization needs to deflect or obfuscate or change the subject (because things are going wrong), it uses surrogates.

On 30 August at Fishwrap (the National Schismatic Reporter), Sr. Joan had an attack op-ed piece – Hierarchy’s Mary is vastly differs from ours – aimed at Archbishop Sartain.

The piece you see at Fishwrap now is not the version that was originally posted.  After a few hours, Fishwrap replaced Sr. Joan’s piece with a bowdlerized version.

What did Sr. Joan originally write about Archbishop Sartain and Mary?

Sr. Joan suggested that Archbp. Sartain is a kind of Catholic mullah with an Islamic, repressive view of women.

She attacked Archbishop Sartain for the sermon that he gave at the LCWR assembly in which he presented an image of Mary. He described Mary as quiet and docile. Sr. Joan, on the other hand, draws a moral equivalence between Sartain’s view of the Blessed Virgin 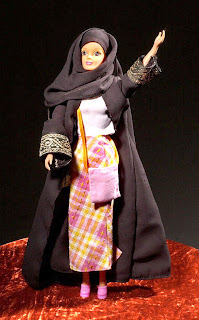 Mary with “the new Islamic Fulla doll, the Barbie doll of Islam”. I am not making this up.

The idea is that the Islamic ideal for women is reflected in the Fulla doll.  They are supposed to be docile and domestic.  Get it?

She must have been pretty angry at Archbp. Sartain to have made that Islamic comparison.  Or perhaps she had some directions from the LCWR.  In any event, NSR was originally willing to post it.  Originally.  Then the original was replaced by expurgated version that eliminated the Islamic references.

Instead, Sr. Joan presents a Mary as liberated, avoiding men, even pushy with the angel of the Annunciation.  Happily Miley Cyrus seemed to “like” the guy she embarrassed herself with the other night on TV, or Sr. Joan might have used her as her model in contrast to Archbp. Sartain’s traditional view (aka the Islamic Fulla Doll).

If you go now to the site of the NSR, you will find that her Islamic comparison has been entirely expunged from her piece.   But it was there.

Here (right) is the screenshot from my search for the original version, which I pulled up from a cache. Click for a larger version.

Here is the text of her piece:

Hierarchy’s Mary is vastly differs from ours
Joan Chittister | Aug. 30, 2013

Two things happened in August that, though apparently unrelated, had a great deal in common. First, the new Islamic Fulla doll, the Barbie doll of Islam, was released, dressed in hijab and abaya — a clear image of the ideal Muslim woman who spends her time “mostly shopping, spending time with her friends, cooking, reading, and praying.”

Both of these events emphasized the submission of women to the dictates of religion as defined by men, whether supported by the Scriptures of either religion or not. Both the doll and the homily communicate some clear, if indirect, points. Neither, we know now, will be inconsequential in a society where communication is the order of the day.

One of the major scientific discoveries of the 20th century, for instance, revolves around the role played by communication in stressful situations — the notion that a person’s communication style can soften or harden conflict depending on how it is used; the idea that simply the amount of information supplied in crucial situations effect the tone, the efficacy and the outcome of negotiations. As a result of those findings, whole corporations changed their processes of decision-making and dissemination of information.

So with all those things in mind, people waited for information about the progress of the Vatican visitation of the LCWR from this year’s gathering in Orlando, Fla. Given the fact that none was forthcoming, people drew their own conclusions.

I, on the other hand, went for the one piece of data the assembly managed to produce on the subject, the homily Sartain gave to the membership. And a clear piece of communication it was.

In this homily, Mary is “quiet,” “docile,” submits herself over and has no “desire or a need to figure things out … or resolve them to her own personal satisfaction.” There was, we’re told here, no “no” or “mine” in her. The Mary of this homily is a passive receptacle of what she understands to be the Word of God.

Well, maybe. But it might be good to think about all that a bit in the light of the other things we also know about Mary.

The purpose of this column is not to parse what the bishop said about Mary on the Feast of the Assumption. I prefer instead to look at what he did not say about her because, it seems to me, what he left out of that homily says just as much about what is expected of women in the Catholic church as Fulla dolls communicate the desires of many Muslims for the place of women in Islam.

For instance, Mary answers the angel’s declaration to her by questioning it. An angel! Someone of much higher rank, it would seem, than even apostolic delegates, and only then with a “Be-it-done-unto-me” response to a situation to which, apparently, “no” was a viable answer. Otherwise, why bother to have the conversation?

Even more important, perhaps, is the awareness that despite the seriousness — even the danger — of her situation, Mary did not go to any man — to the high priests of the temple, the local rabbi, her father or even Joseph — for directions about what to do next. She went to another woman for the wisdom she needed and followed that instead. No visitations here.

In another instance, at the wedding feast at Cana, Mary gives her own set of apostolic orders to no less than Jesus himself as well as to the wait staff, as in, “Go and do what he tells you.”

Mary herself questioned the propriety of what Jesus was doing in the temple with the elders and later is part of a crowd of family and friends who are even concerned that Jesus may be, as the Irish would say, “losing the run of himself.”

And finally, if anyone wants to know just how influential and important a figure Mary was to the development of the early church, the very idea of her being part of the gathering of apostles on Pentecost when each of them is anointed into discipleship by the Holy Spirit ought to be enough to dispel the notion that what we have here is a woman without a strong sense of self.

No, the Mary not mentioned in this homily on the Assumption was a woman not intimidated into the Incarnation, not beholden to male answers, not shy about giving directions about what should be done, not without a high sense of personal responsibility, and not one bit in doubt about her place in the hierarchy of the church.

Those, I think, are precisely the qualities we see in women in our own time that make for what some parts of the church are now calling “radical feminism.”

From where I stand, that is a sad misuse of language, a kind of Fulla doll theology and an even sadder case of spiritual blindness.

We know what Sr. Joan really thinks. I think we have the right to know what sort of surrogate role she is playing for the LCWR.

I’ve got to give some credit to the Fishwrap this time.  Even they had the good sense not to public that embarrassing twaddle.

Fr. Z is the guy who runs this blog. o{]:¬)
View all posts by Fr. John Zuhlsdorf →
This entry was posted in Our Catholic Identity, Women Religious and tagged Archbp. Sartain, Fulla doll, LCWR, Sr. Joan Chittister. Bookmark the permalink.