Wherein Fr. Z posts his annual rant on BLUE vestments and then sings to you. POLL! 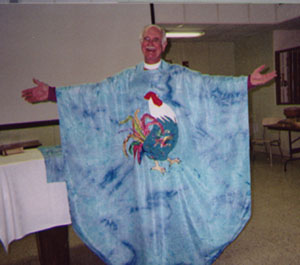 Some veteran readers here know about my annual rant about BLUE vestments during Advent.  Lest all other Advent considerations – such as the coming of the Lord – be overshadowed, herein I rant.

I believe this dopey liturgical abuse is fading out under the influence of the Biological Solution, but surely it pops up here and there.

REMINDER: Blue is not an approved liturgical color of the Roman Rite (though some use it – on the claim of custom – for Marian feasts according to some old tradition in Spain and former Spanish territories). Yes, I know the previous Marini put blue on the Pope in Austria.  That was bad.  That was ugly.  That is now over.  Well… with this Pope, whose knows.

For Advent purple or violet vestments are to be used, and rosacea for the 3rd Sunday as an option.

Fine.  So long as the Advent color isn’t blue, I don’t care. Mind you, as soon as blue is approved for use, I will be the first in line to obtain a glorious set in the Roman style!  The day they are approved, I will post here with a plea and take up a collection and get, if possible, a truly spiffing set, perhaps even a solemn set, replete with cope and humeral veil.

I think this illicit use of blue is trailing off.

Let’s have a little poll!

Chose the best answer and leave a comment in the combox, below.

When you’ve had a hard time trying to figure out just what that color is Father is wearing this week, just what possessed him to put on a vestment that ugly, why not relax with a Say The Black – Do The Red coffee mug filled to its steaming brim with Mystic Monk Coffee?

Do you want liturgical abuses on your conscience?

Sing along! Lemme help you out.

O come, o come liturgical blue;
out with the old, and in with the new.
Let’s banish purple vestments from here,
the color blue is very HOT this year.

Since Advent is the Blessed Virgin’s time,
we’ll wear blue, though it’s canonic crime,
and in the third week, we’ll wear white.
Although it’s wrong, we’ll say that it’s alright.

Around the wreath we’ll place blue candlelight,
and in one corner, we will place one white.
We’ll drape blue over our communion rail,
and use blue burses with blue chalice veils.