The catholic Left will turn on Pope Francis when they finally realize that he is not going to conform to their liberal and heretical notions and agenda.   The cracks are already appearing.  Most liberals have been gushing about him since his election, because they took his folksy style and lack of papal decorum as a sign that he is a fellow traveller.   But this Pope is not going to, for example, give approval to the ordination of women.  He is not going to smile on gnostic ravings.  He is not going to give the nod to moving beyond Jesus.

And so today we read in at the Fishwrap (aka The National Schismatic Reporter) that a coalition has formed asking Pope Francis… get this… to apologize to the LCWR and to Sr. Elizabeth Johnson!

And the Fishwrap is supporting this.

An open letter to the pope has asked for an apology to U.S. women religious and an intervention on their behalf in their ongoing reform discussions with the Vatican’s doctrinal congregation.
It was with “respect and gratitude” but also “concern and dismay” that The Nun Justice Project, a coalition of 16 progressive U.S. Catholic organizations, wrote Pope Francis Thursday regarding recent comments from Cardinal Gerhard Müller to the Leadership Conference of Women Religious. The organization, representing more than 90 percent of U.S. congregations of Catholic women religious, is currently under a reform mandate from the Müller-headed Congregation for the Doctrine of the Faith.

In addition to the letter, the coalition has asked supporters to sign an online petition. As of Thursday afternoon, more than 800 people had signed. The Nun Justice Project also urged people to Tweet “We stand with the Sisters” to the pope, as well as mail him copies of their letter and Spanish copies Johnson’s books Consider Jesus and Quest for the Living God.

The full Nun Justice Project letter is as follows:

Dear Pope Francis
We write with respect and gratitude for your extraordinary leadership in our Church.

Sadly, we also write with concern and dismay at the behavior that Cardinal Gerhard Müller recently exhibited toward women leaders of the Leadership Conference of Women Religious (LCWR) and especially toward Dr. Elizabeth Johnson CSJ.

This communicates that faithful Catholic female leaders are disrespected and discounted in our Church.

On numerous occasions you have expressed a desire to expand leadership opportunities for women. We respectfully suggest that the place to begin is to listen to faithful women who are already exercising leadership.

We ask you to personally [split infinitives] intervene with Cardinal Müller and Archbishop Sartain and remove the unjust mandates imposed on LCWR over two years ago.

In addition, a public apology to Dr. Johnson and LCWR leadership would speak volumes about the institutional Church’s intent to truly listen to women and honor their voices.

In closing, we express our love and solidarity with you as together we joyfully proclaim the rich diversity revealed in the Good News of Jesus Christ, a message ever ancient yet ever new.

I think it is interesting that the Fishwrap is giving its support to those organizations in a contumacious attempt to make the Vicar of Christ apologize for the defense of Christian doctrine.

Remember: They will settle for nothing less than the ordination of women.  That’s their unholy grail… cup… thing. 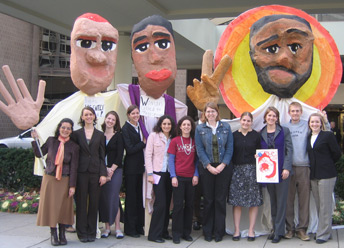