REVIEW: Movie “Risen” is a “resurrection mystery” and a reflection on death 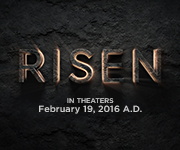 I went to see Risen yesterday.

It starts like a mystery novel/show, but not a murder mystery. It’s a resurrection mystery.

Its starting point is the mystery surrounding the whereabouts of the body of Jesus of Nazareth, which could become a dangerous political flashpoint for the embattled Pontius Pilate on the eve of a visit from the Emperor Tiberius.

The main character is, of course, the Body of the Risen Lord. But the other main character is that of a Roman military Tribune, Clavius (Joseph Fiennes), who is tasked to find the body of the crucified Nazarean after his fanatic disciples steal it during the night… or so they think. The politics and the tension between the Jews and Roman is portrayed pretty well.

This movie was not made by Catholics. As such there are a few points that are not quite right, but you can look for them yourselves. I don’t like to post spoilers or too many detail.

Before the release, when I posted about the lead up of this film on this blog, a commentator posted that he thought there was an irreverent scene involving the Eucharist. I contacted the distributors at that time to clarify the situation. Having seen it myself, I didn’t find any irreverence toward the Eucharist. The scene involves a meal wherein the Apostles are eating. They are tearing apart pieces of bread that they pass around. It isn’t an explicitly Eucharistic moment, as far as I can tell. However, had I been consulted during the making of the film about that scene, I would have advised that they do it a bit differently so as not to create even the slightest appearance of Eucharistic irreverence.

There is a “Shroud of Turin” moment.

I eventually remembered where I saw Clavius’ subaltern … Draco in Harry Potter. Growed up, he did. I hope he, as an actor, can eventually shake off feckless characters and that he won’t be forever typecast.

Along the way, and I think this isn’t too much of a spoiler given that everyone knows going into it that the Roman Tribune is going to become a believer… Peter takes to Clavius along the way. I wonder if this isn’t a subtle Protestant way of dealing with Christ’s entrusting of the “keys” to Peter, to downplay the Catholic understanding. Latin clavis means “key” (think of French “clef” in music). Clavus, by the way, is “nail”. The name “Clavius” wasn’t common for Romans. The name of the famed Jesuit mathematician Christopher Clavius has nothing to with an ancient Roman name. It is a Latinization of a German name Clau. I think the movie was originally named “Clavius”. I suspect that “Risen” will resonate more with Christians of various non-Latin stripes.  I may have over-analyzed that.  Maybe they just wanted a Roman sounding name.

The way that the Apostles are depicted … differently from other movies. I thought their directorial choices for Bartholomew were regrettable. I was distracted by that. Furthermore, in their zeal I think the makers succumbed occasionally to the temptation of syrupy piety. But… hey… I often tell audiences and readers that a little syrup in your piety doesn’t hurt anyone. Lastly, the depiction of the Ascension… what does one say?  I wasn’t wondering how they were going to handle that, once I realized that they were going to give it a go. The Lord walks into the sunset with rising music and a kind of sonic bomb. I made notes during the film. At that point I jotted: “Really, guys?”

That said, the film has a lot going for it. Don’t shy away because it has a few bumps.

The acting is good. Fiennes’ Clavius is a decent chap in a horrid job and place who really wants The Truth, no matter what. He is, therefore, the foil to Pontius “What is Truth?” Pilate (Peter Firth… nothing wrong with his acting either). Trying to get to The Truth about the Lord’s Body sets him on a course that will overturn his worldview.

The movie was fairly authentic in its depiction of the Roman stuff. As a matter of fact, past films almost always depict the Roman legionaries – such as those of X – Fretensis – as being viciously cruel beasts, even in an over the top caricature. I have never bought that. I don’t think Romans were any more cruel than any other soldiers of any other army. Some of the men in the movie show some concern for the locals, even for one of the thieves dying with Christ.  Were they sweethearts one and all?  Of course not.  But they weren’t, to the man, monsters.

Finally, it seems to me that this movie is a good reflection on the fact that all of us are going to die. It is a reflection on death.  It asks the question: What is going to happen to me when I die?  And I am going to die.  Is it the grave and corruption?  Is that it?  Or is there more?  After the long slog in this vale of tears, will there be refreshment, light and peace?  Or the pit?

Clavius himself, near the beginning, is world-weary.  He is doing what he is doing so that some day he can have some worldly quiet and peace.  He wants “a day without death”.  The movie revolves around the day death died.  The peace which he really longs for is not of this world and the grave is not the goal, as the poet said.  There is a sort of turning point moment in a line that Pontius Pilate has when viewing a corpse.  You’ll hear it when you go.  You will see how the beginning and the end tie together in this regard.

A note for taking children: There are some awful dissolving corpses on view a few times.  They get across the fact that it is pretty unpleasant dealing with them.   They don’t linger over them, like a horror film, but they are there.  The movie is full of cadavers, which is, after all, part of the point of a film called “Risen”.

See it for yourselves and chime in.

Here are a couple trailers.  And click the ad on the sidebar while it’s still there!

Fr. Z is the guy who runs this blog. o{]:¬)
View all posts by Fr. John Zuhlsdorf →
This entry was posted in REVIEWS and tagged movie, movie review, review, Risen. Bookmark the permalink.