More Musings on #AmorisLaetitiae and a ‘Statement” from great #confccb priests 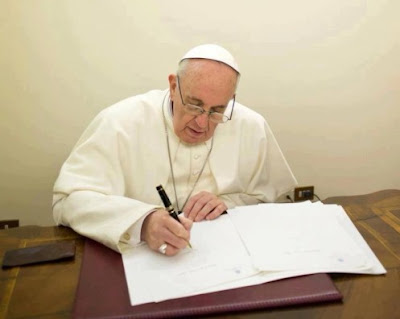 Now that the Post-Synodal Apostolic Exhortation (P-SAE) Amoris Laetitia is settling in, I have few more observations.

First, “left” and “right” have reacted predictably.   We are challenged by the P-SAE in different ways.   The P-SAE doesn’t change Catholic doctrine, though some will claim that it does.  If the RIGHT, conservatives and traditionalists are now challenged to an even more compassionate approach to all who need pastoral care (I’m not saying thereby that they aren’t already compassionate – that’s just a canard), the LEFT, liberals, are now challenged by Pope Francis actually to embrace Catholic teaching and conform their pastoral approaches to it (and I am saying that they often don’t – and that’s just a fact).  Among other things, Amoris Laetitia is at least a call to liberals to fidelity to the Church’s teachings and to abandon dissent!  On this point Amoris Laetitia could cause some division in the catholic Left.  Some are more honest than others, after all. Those pastors of souls who aren’t, who dissent from clear Catholic doctrine both in the pulpit and in pastoral practice after this Exhortation will probably wind up in the deep cinders of Hell.  There.  I said it.

Second, the P-SAE Amoris Laetitia doesn’t change doctrine.  I don’t think, pace Jesuits, it develops doctrine either.  However, despite the fact that it doesn’t change Catholic teaching, most people – including the divorced and civilly remarried – reading garbage MSM will see headlines like “Pope Francis, Urging Less Judgment, Signals Path for Divorced on Communion” and “Pope to church: Be more accepting of divorced Catholics, gays and lesbians” and then perhaps hear loopy rubbish on Sunday (if they still go to Mass more than four times a year).  They will be left with the conclusion that the Church has changed its teaching on homosexuality and will think that it is okay to go to Communion.  There isn’t much that we can do about that.  What to do? We have to be clear in our own little spheres of influence about what Amoris Laetitia says and doesn’t say.

Third, I am contemplating the nature of the P-SAE itself.  I wrestled with this after Evangelii gaudium.  It is not an Encyclical Letter, which is a pretty weighty type of papal teaching instrument about faith and morals.   It is not an Apostolic Letter, which, either Motu Proprio or not, can either be doctrinal in nature or juridical.  It is not just an Apostolic Exhortation out of the blue, but rather it is a Post-Synodal Apostolic Exhortation.  As such, it is closely attached to the acta of the Synods that took place on the announced topic, the family.  An exhortatio is “an encouragement”.  If it is true to its nature as a P-SAE, then Amoris Laetitia “exhorts” more than anything.  I now consider myself duly “exhorted”… “encouraged”.  Pope Francis is pushing, exhorting, encouraging me to go in a particular direction.  When Popes exhort, we listen.  We Catholics must give assent to the Ordinary Magisterium. There are, however, levels of teaching and levels of teaching instruments.  There levels of documents but any level of document can be the instrument of a definitive or even infallible teaching, so long as the language is clear.  That said, a P-SAE isn’t all that weighty in itself.  It’s a fairly low level document intended to “exhort” and it is closely aligned to the Synod it remarks on.  The quality of the arguments and teachings are another matter and they must be given due consideration.

Meanwhile, the Confraternity of Catholic Clergy in the UK issued a good statement about Amoris Laetitia.  I know some of the organizers of the CCC/UK  They are fine men, good priests, and friends.  My emphaes.

The priests and deacons of the Confraternity of Catholic Clergy in England and Wales affirm with the Holy Father, in his Apostolic Exhortation Amoris Laetitia, the unchanging teaching of Christ and His Church regarding marriage, the family, and human sexuality.  They renew their pledge to continue to follow the teaching and example of Jesus Christ, the Good Shepherd, who acts with great clemency towards sinners, but also with pastoral clarity: ‘Go and sin no more’. (John 8:11)

Our members are heartened that the Exhortation calls for a return to the wisdom of Humanae Vitae (82), defence of the ‘inalienable rights’ of the unborn child (83), re-affirmation of the role of parents as the primary educators of their children (84), and warning of an encroaching ‘gender ideology’ (56).  In response to the Holy Father’s call, the Confraternity’s members particularly pledge themselves to work for better and more profound marriage preparation and accompaniment, and clearer, unashamed and more positive articulation of the good news of the joy of human love.

At a time when moral relativism has caused such confusion, the Confraternity recognises the need to work with pastoral sensitivity, guided by the consistent principles of Scripture and Tradition, and will help its members to discern wisely how to help individuals hurt by the crisis in marriage and family life of which the Holy Father speaks.  Those in irregular unions are a particular focus of pastoral concern, and need to be brought closer to Christ and his Church.  Confraternity clergy will continue to encourage those in problematic marital circumstances to move forward, by personal discernment in the light of the Gospel, and to deepen their involvement in the life of the Church, without losing sight of the fact that certain situations constitute objective and public states of sin.  The Church’s pastors must never neglect the call to repentance, and the need to avoid scandal which would cause the weak to fall, while accompanying their people with kindness and understanding.

Combox moderation is ON.

Fr. Z is the guy who runs this blog. o{]:¬)
View all posts by Fr. John Zuhlsdorf →
This entry was posted in Mail from priests, Priests and Priesthood, The Drill and tagged Amoris Laetitia, Apostolic Exhortation, Confraternity of Catholic Clergy, Post-Synodal Apostolic Exhortation. Bookmark the permalink.