I receive this from a reader…

I thought you might be interested in this; it at least is new to me. In Waterbury, Connecticut this morning, I came across this version of “Now Thank We All Our God” in WLP’s “We Celebrate” hymnal. I circled the two notable changes. The first is what caught my ear and made me pay closer attention even though it was very subtle. The way I always heard this hymn, it was “In whom his world rejoices, not “this world.” The reasons are obvious. It’s one of those things that had it been written that way in the first place 400 years ago, no one would care, but obviously someone with a 2016 agenda was at work here.

The second is actually more troublesome. The way I’ve always heard it, it was, “and free us from all sin, till heaven we possess,” not “free us from all ills, in this world and the next.” The very end of the verse doesn’t bug me too much, but I wonder why that needed to be changed. Expunging the reference to sin, however, does raise my ire— as you well know, that is not what we need these days. It makes me wish that the hymn had a Latin original so that we could appeal to that.

I am with Cardinal Sarah– the Novus Ordo needs to be fixed, not made even worse with stuff such as this. The other day I wrote about a blurb Benedict XVI penned for a book in honor of the 25th anniversary of election of Patriarch Bartholomew.  Benedict took that opportunity to emphasize the importance of ad orientem worship.  I am confident that he did this knowing full well that Card. Sarah called for ad orientem worship from priests beginning in Advent, if possible, and I am also confident that he knows about the blow back and defiance Card. Sarah’s invitation provoked.  My friend Jan Bentz also wrote this up for LifeSite the other day.  HERE

We need ad orientem worship as an effective orthotic for many levels of the Church’s life.  I say the same about expanding the use of the older, traditional form of Holy Mass. Benedict gave us great tools: a good explanation of what ad orientem worship is about and also the Motu Proprio Summorum Pontificum.

Not too long ago, His Excellency Robert C. Morlino, Bishop of Madison and The Extraordinary Ordinary, spoke to seminarians and staff at the North American College about ad orientem worship.  He made a great connection between “turning towards the Lord” and morals, the bridge between them being a recovery of a sound eschatological view.  He also published a version of that talk in the diocesan newspaper.  HERE  You will see how he deals with pro-life issues along with matters of matrimony.  It is quite the presentation.  And he is right.

Ad orientem worship directs us all together to the liturgical “East”, whence from the very beginning Christians have believed the King of Fearful Majesty will return in glory to judge the living and the dead and unmake the world in fire.

Judge the living and the dead and unmake the world in fire.  That bears repeating.

Ad orientem worship can help us recover together a deeper sense of the Four Last Things.

I am pretty sure that people who regularly meditate on the Four Last Things are less inclined to commit mortals sins habitually.

Perhaps this is one of the reasons why there are bishops and priests who so strongly resist and even fear ad orientem worship.  Perhaps they are purposefully avoiding, for one reason or another, regular reflection on their own judgment, the Four Last Things.  I have often wondered if that is the reason why many priests neglect their duties in regard to the Sacrament of Penance for their flocks.

I suspect that priests who on principle refuse ad orientem worship have a problem of some kind that they are not dealing with.  I’m not talking about priests who don’t want to say Mass “turned towards the Lord” because they are unfamiliar with it, or they are not sure their flocks would go for it, or they just don’t get it.  I’m talking about priests who get it, but they refuse on principle ever to say Mass ad orientem.  I can’t shake the idea that they might be dealing with some undealt with issue. 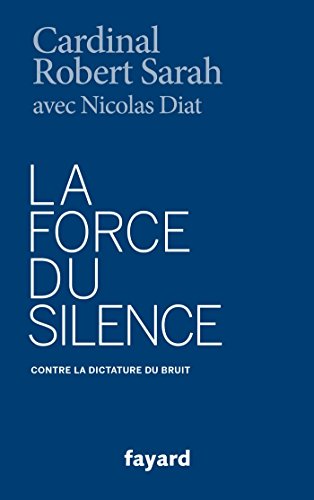 As I read more and more of Card. Sarah’s new book about the power of silence to combat the dictatorship of noise (right now only in French – US HERE – UK HERE), on the foundation of having read also his fantastic God Or Nothing (think about that title for a moment – UK HERE), as I consider also how he speaks in public and having spoken with him personally, I am convinced that his appeal to priests to “turn towards the Lord” is rooted in profound marrow.  It is a sound course of treatment, a corrective orthotic.  When I compare what Sarah has to say with what his critics respond… and how they respond… pffft.

There comes to mind the image of braces on legs, teeth, or back, which slowly and painfully correct rigid structures when they are twisted and dislocated.  Ad orientem worship in the Novus Ordo and also the side-by-side celebration of Holy Mass in the traditional form of the Roman Rite are orthotics.  They are spine straighteners and strengtheners.  They realign.

We are dislocated right now.  Our corporate Catholic identity is twisted and misaligned, alternately enervated and neuralgic, which makes it harder and harder to run to our daily tasks as Catholics, in private and in the public square.  If our spines are out of line, we can’t do the heavy lifting of living Catholic lives according to our God bequeathed vocations.  If we cripple ourselves, we betray the gift God has given us.

We all always need conversion.  But we also, as individuals and as a body, need straightening.

Retracing my steps to the reader’s letter at the top, note how the redactors edited out the uncomfortable reference to sin.   This doesn’t surprise me, of course.  In the prayers, the orations, for the the Novus Ordo, when they were based on or pasted together from bits of earlier and ancient prayers, nearly completely redact out clear references to our sins, our guilt for sin, expiation, propitiation, etc.  The bowdlerized hymn reflects the bowderlized orations.  Don’t get me wrong.  The orations in the Novus Ordo are, generally, pretty good prayers, taken individually!  But, as a body of prayers, they aren’t enough. They studiously avoid clear references to some really important things.  They leave us without the constant spur to reflect on our souls and think about our judgment.

Ad orientem worship in the Novus Ordo and side by side use of the Traditional Roman Rite will bring to our flocks a powerful corrective for the twisting enervation of our Catholic identity.  The correction of the twist will be slow and painful, I’m afraid.  Those braces on limbs and on teeth don’t feel good.  But without the corrective counter-forces on our twists we soon won’t be able to walk or chew.  I don’t know much about sciatica – caused by pinching and irritation of nerves when things get out of line – other than the fact that it is really painful and that, unless it is treated, it can get so bad that you can’t get around.

Fathers… there is time before Advent to start catechizing your flocks, to ready them to turn toward the East.   There is time, but you have to begin now.   Many will fight you.  They will grumble and make complaints.  Your bishops might – probably will – bully you.    Your fellow priests will run you down.  I think it is the right thing to do.  You will be made to suffer.  I, too, will be made to suffer for urging this.  If you can’t do it right now, Fathers, start thinking about how you can get it done down the line.  Make a plan.  Read and study.

Get Klaus Gamber’s The Reform of the Roman Liturgy: Its Problems and Background US HERE UK HERE

Get Fr. Lang’s Turning Towards the Lord US HERE UK HERE

Dear readers… make sure that your priests have these books.  Get them.  Give them.

This is going to be hard and fraught with pain.

As Augustine wrote, with only his knowledge of ancient medicine, the doctor doesn’t stop cutting just because the patient is screaming for him to stop.

I received this amusing note from Fr. George Rutler about the hymn and comments at the top of this post.   He corrects an errant assumption about the text change.  However, his correction in no way touches on the fundamental point I made about what was intentionally done to weaken the Novus Ordo texts  Nor does it touch on my larger goal in the post.  Still, this is interesting.  Take it away, Fr. R:

“Now Thank We All Our God”:

Sophia Institute Press is republishing my history of hymns, “Brightest and Best” in January. It was first published by Ignatius Press 19 years ago and has been out of print.

Having been an Anglican choirboy, I know many hymns by heart and I can say that, curiously, the WLP version of “Now Thank We All Our God” is the original. (“sin” for “ills” is the bowdlerized version. )The text is by Catherine Winkworth (1827-1878) an English social worker and Germanophile. She went through a couple of slight revisions (“this world” in the original and “his world” in later ones), and basically what we have first appeared in her “Lyra Germanica” in 1858. Of course the archaic indicative “haths” were in the mint Winkworth text..
The German original was written by Martin Rinkart (1586-1649), Lutheran archdeacon of Ellenburg during the horrors of the Thirty Years’ War. “Der un von Mutterleich/Und Kindesbeinen an/ Uhzahlig viel ze gut/ Bis hieher hat getan” (I don’t do umlauts). [And you are the poorer for it!] Part of it is a paraphrase of Jesus ben Sirach.

As Winkworth was a Germanophile, Mendlessohn who harmonized the tune of Johann Cruger, was an Anglophile. The Nazis banned all his works, along with the works of Mahler, because of racism.

This is the classical English version:

Now thank we all our God, with heart and hands and voices,
Who wondrous things hath done, in Whom this world rejoices;
Who from our mothers’ arms hath blessed us on our way
With countless gifts of love, and still is ours today.

O may this bounteous God through all our life be near us,
With ever joyful hearts and blessèd peace to cheer us;
And keep us in His grace, and guide us when perplexed;
And free us from all ills, in this world and the next!

All praise and thanks to God the Father now be given;
The Son and Him Who reigns with Them in highest Heaven;
The one eternal God, whom earth and Heaven adore;
For thus it was, is now, and shall be evermore.