He is, in essence, papolatrous.  He’s also pretty nasty, when it comes right down to it.  He blasts away at La Stampa against anyone who dares to have quizzical thoughts about Amoris laetitia.

Canonist Ed Peters looks at Walford’s comments on canon law. It’s kinda gory… and fun. I remember one crisp November day sitting on a bench in Central Park and eating a sandwich from Pastrami Queen while up in a tree a large hawk of some sort ripped the guts out of a squirrel. HERE (for Peters’ article, not the squirrel thing). Nearby a dad told his kids that birds didn’t go to the store for meat in plastic packages. At which point the hawk drew out a nice long bit of intestine, eliciting a vigorous, “EEEEWWWWW!”

But I digress.  Let’s see Ed Peters’ version of hawk and squirrel … with my emphases and comments:

Nooo, Canon 17 does not let us undercut Canon 915 and what it protects

Based on the biographical interview he granted to the Catholic Herald, it seems that Stephen Walford is a professional pianist and an amateur theologian (one’s dearth of formal education in a complex discipline being an obstacle, but not a complete bar, to one’s achieving some knowledge of at least some topics within that discipline), rather as I am a professional canonist and an amateur, I dunno, Latinist or woodwind player. Nothing wrong with being a professional, of course, or an amateur; but dilettantes are something else. If, having watched “Searching for Bobby Fisher” and knowing how the horsey moves, I started opining publicly on the Sicilian [Defense] opening, what would I be? A dilettante. And chess, mind, is a little thing. [There are only 288+ billion possible positions after four moves apiece, btw.]

Now, in regard to canon law, which Walford repeatedly invokes in the course of trashing as “dissenters” anyone who questions the text and certain applications of Amoris laetitia and its progeny, Walford is simply a dilettante unaware that most of his purported explanations of canon law have little or no connection to what the law really means—and sometimes, not even to what it says. And canon law, mind, not to mention the doctrine it works to protect, is a big thing. [Ultimately, law is in the service of the salvation of souls.  A Big Thing™.]

It is difficult to discuss law, of all things, with people who not know what it actually says. For an example of Walford’s misstating what the law (here, Canon 915) says, see his claim that “canon 915 refers to ‘obstinate’ and ‘persevering’ manifest grave sinners.” Of course, John Paul II’s Canon 915—aware that the Church cannot and does not judge souls or determine who is personally culpable for sin or if so by how much—does no such thing. Rather, this papal norm responds to objectively reckoned and publicly observable situations of sin and, in an unbroken line of practice going back to Scripture, directs ministers of holy Communion to withhold that most august Sacrament from persons who, by their public conduct, have placed themselves within the purview of the canon.

Confusing “sinner” and “sin” is, I grant, quite common in this debate and even several ranking prelates seem to think that externally-made assessments of personal culpability (however that oxymoronic task is to be accomplished) are relevant to the operation of Canon 915. But what can I say that has not been said before? Treating “sinner” and “sin” as equivalents is something a professional would avoid, while an amateur, intrigued by the distinction once he saw it, would, hopefully, stop treating the terms as synonyms. [Eeeeewww!]

It is not, however, Walford’s mistaking the plain text of Canon 915 that attracts my attention, but rather his attempt to explain what Canon 17—a norm little noticed in this debate, for good reason—means and allegedly how, by reading Pope Francis’ words in Amoris through in its light, “a path maybe opened to reception of Holy Communion” for divorced-and-remarried Catholics.

As we are talking about canon law, I suggest we start with the canon. The whole canon.

There’s more gut-ripping available at Ed Peters’ blog In The Light Of The Law.  If you don’t have some squirrel handy, you might make popcorn.

Meanwhile… watch this tweet exchange, to which I was alerted… 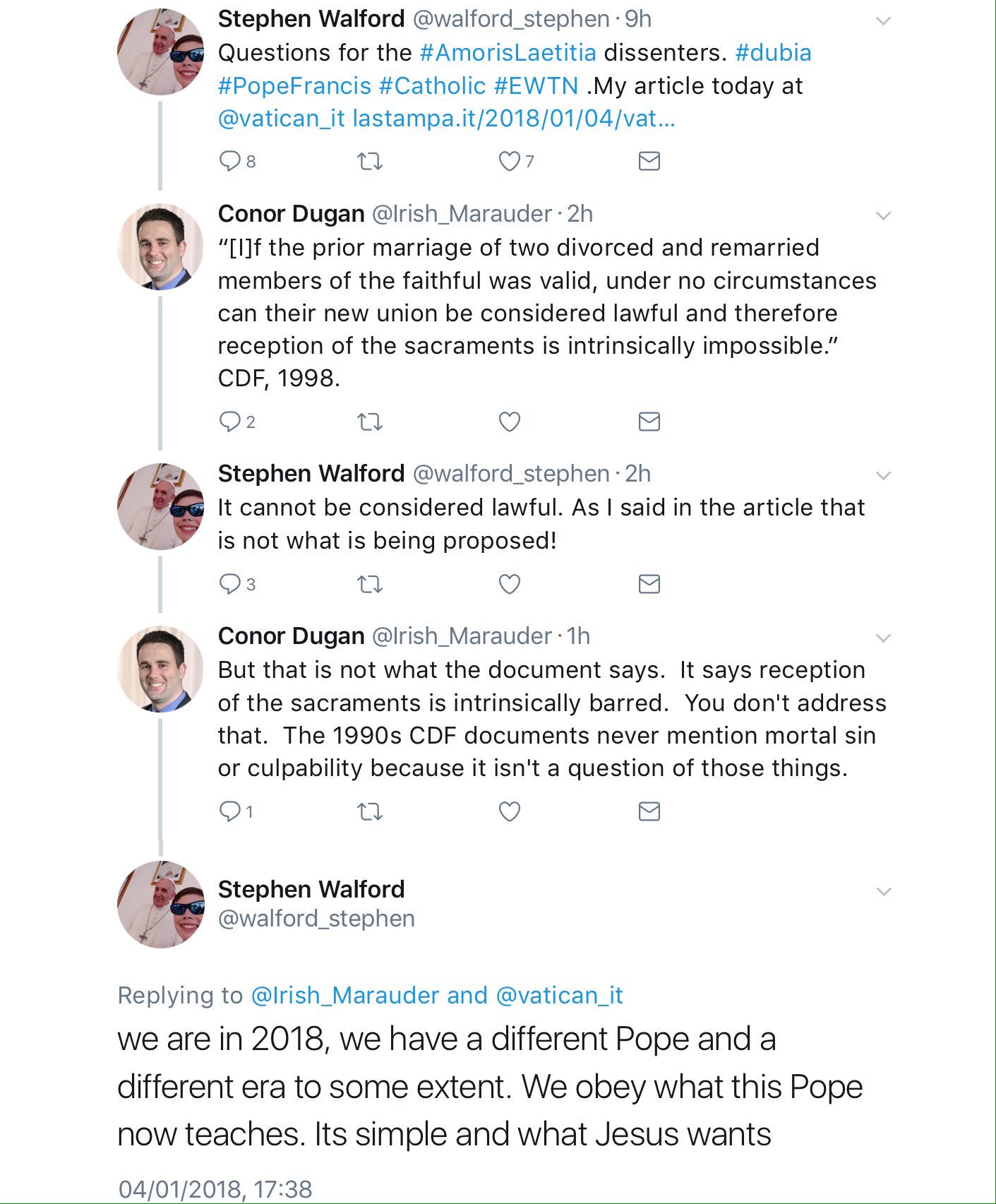 Do you see what poor Walford did there?  Poor thing.

Once again…. his seriously thin skin aside, do you see what Stephen “the poor thing” Walford did there?