The more I more read about the “Make the Church a Joke Again” Gay-la, the creepier it gets. 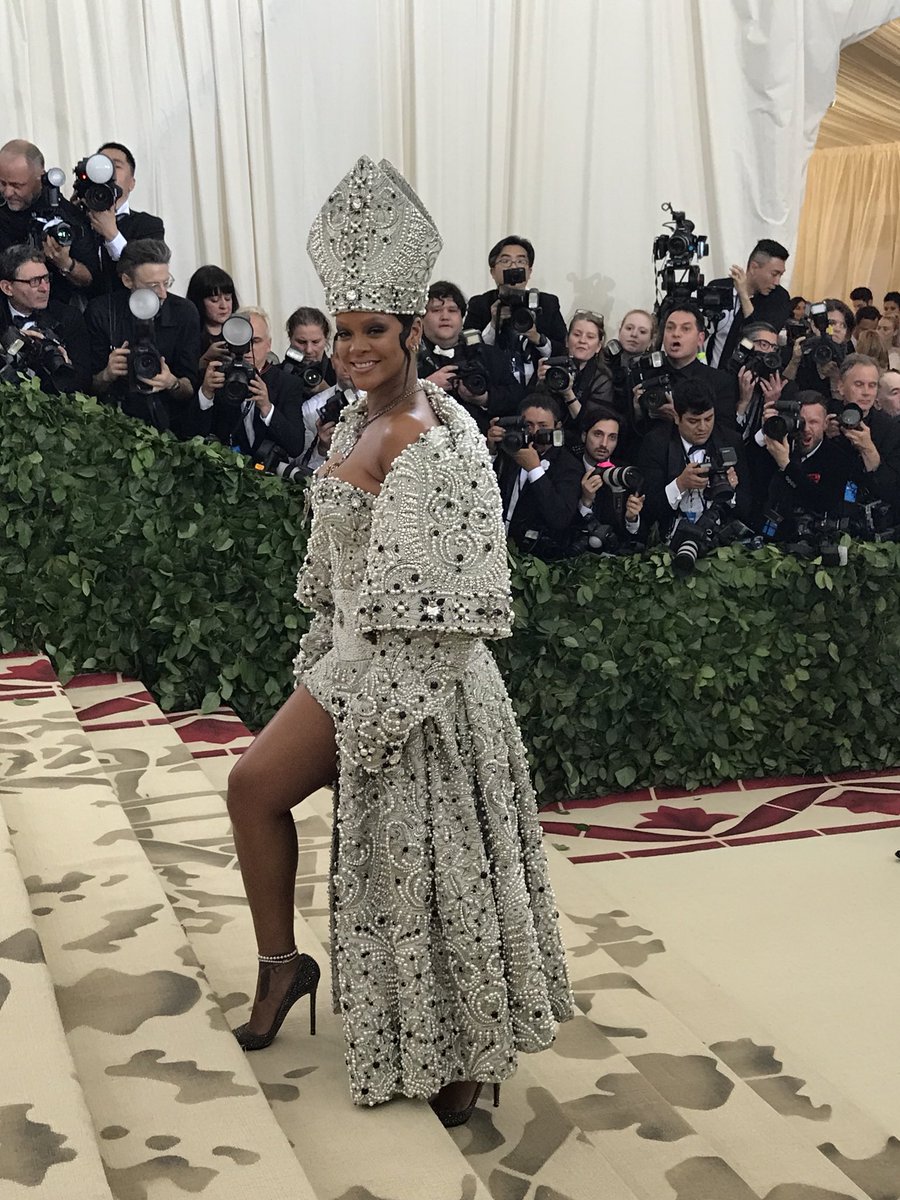 You’ve been reading about the “Gay-la”, the “Fellini Rip Off”.

I wrote earlier that it was sure to have made all the Jesuits present swell with pride.  I then learned that Jesuit homosexualist activist James Martin, LGBTSJ, was there.

A Jesuit wrote an email to me:

“[I]t didn’t make me swell with pride. I was appalled, as were several Jesuits in my community. Don’t let up on calling out Jesuits though. Many of us need a good raking over the coals. But I hope you will have a chance to meet some “good” Jesuits also. There are not a few, including me, who are fans of your blog.”

I have meet good Jesuits.  Actually, great Jesuits.  I know you are out there, men.   DO SOMETHING about your brethren!

Today I was sent a story about stuff they ate.

For Monday night’s gala, Zilberman joined forces with Versace to make the edibles that fit with the theme of “Heavenly Bodies: Fashion and the Catholic Imagination.” But she didn’t only use her imagination.

“I took specific inspiration from the jewelry, including hand-carved rosaries and giant papal rings, that I photographed when I visited the Vatican a few months ago,” Zilberman described.

According to Bobb, in her piece published Friday, Zilberman “used edible gold to create the pieces” of religious items alongside Versace’s logo of Medusa’s head.

Piers Morgan on the Gay-la HERE

“I’m a Catholic,” Morgan wrote for the Daily Mail. “Not the most devout you’ll ever meet, I’ll admit. But I was brought up a Catholic – I even received not entirely successful spiritual guidance from nuns as a teenager! – and I still consider myself to be a Catholic. I know many people don’t believe in any God or religion, let alone Catholicism, and I respect that. All I ask in return is for my beliefs not to be rudely disrespected.”

And the Met Gala costumes did just that, he wrote. Such costumes includedsexualizations of the Blessed Virgin Mary, Rihanna dressed as a glitzy female pope, and a Victoria’s Secret model in a modified cardinal’s cassock with a slit up the side.

“A lot of the imagery was highly sexualised, which you might think not just inappropriate for a religious theme but also incredibly offensive to the many victims of sex abuse in the Catholic Church,” Morgan pointed out.

He wrote that Madonna “looked preposterous” and performed Like a Prayer at the after-party.

“When it first came out, Madonna enjoyed enraging Catholics by making a video featuring burning crosses, statues crying blood and her seducing a black Jesus,” he commented. “What a nice touch to have this blasphemous old crone [!] returning in all her unedifying glory to insult us all over again.”

“Next year’s Met Gala is going to have an ‘Islam’ theme,” Morgan wrote sarcastically. “Yes, guests in 2019 will be encouraged to wear skimpy, provocative dresses that ‘celebrate’ the Prophet Mohammad, Islamic clothing including hijabs and burqas, and the Koran. I can also reveal that the 2020 Met Gala will have a ‘Jewish’ theme. Yes, a bunch of celebrities and models will be posing for the world’s paparazzi dressed in all manner of Jewish attire and regalia, including dressing up as Rabbis and wearing kippahs.”

Ross Douthat has an odd piece but with some good bits.  His use of Proust was inspired, but he dropped the ball a couple of times in this one.  Here is the part that caught my eye:

In 1904, during a debate in France over the anticlerical government’s takeover of church property, a young Marcel Proust wrote an essay for Le Figaro inviting readers to imagine a future in which the Catholic Church vanished completely from his country’s memory, leaving only the bones of French cathedrals as its monuments.

Then he further imagined the cultured elites of some future France rediscovering the texts and chants and rubrics of Catholic liturgy, and in a spasm of enraptured aestheticism, restoring the cathedrals and training actors to recreate the Tridentine Rite Mass. In his vision, like devotees of Wagner making pilgrimage, “caravans of swells make their way to … Amiens, Chartres, Bourges, Laon, Rheims, Rouen, Paris,” and inside France’s Gothic churches “they experience the feeling they once sought in Bayreuth … enjoying a work of art in the very setting that had been built for it.”

But of course the recreated Catholic liturgy and revived Catholic aesthetic would never be the real thing; the actors might know their roles, and the incense might waft thick, but attendees could “only ever be curious dilettantes; try as they might, the soul of times past does not dwell within them.”

Proust’s essay, lately translated by Catholic traditionalists, came to mind while watching the beautiful and blasphemous spectacle at the Met Gala on Monday night, where a parade of stars and fashionistas swanned about in costumes inspired by the aesthetics of Catholicism, while a wide variety of genuinely Catholic articles, from vestments to tiaras, were displayed in a Met exhibit titled “Heavenly Bodies: Fashion and the Catholic Imagination.”

Like Proust’s “caravans of swells” attending liturgical performances, the attendees at the Met were paying a cultural homage to the aesthetic riches of the Roman Church — when, of course, they weren’t sexing them up for shock value. But the spectacle was not exactly Proust’s prophecy come to life, because unlike in his thought experiment, Catholicism today remains a living faith — weakened but hardly gone, with as complicated a relationship to its own traditions as any lapsed-Catholic museum curator or celebrity dressing up as the Maid of Orleans.

This complication is apparent in the Catholic response to the Met Gala itself, which consisted of an institutional blessing for the spectacle — not just Cardinal Timothy Dolan opening the museum exhibit, but the Sistine Chapel Choir performing for the swells and starlets in the evening — [and Madonna] followed by an angry Catholic social-media backlash against the evening’s various impieties. When a living faith gets treated like a museum piece, it’s hard for its adherents to know whether to treat the moment as an opportunity for outreach or for outrage.

But the complexity runs much deeper, because to the extent that part of the Proustian prophecy has come true, to the extent that elements of the Catholic tradition have turned into archaic curiosities to be rediscovered by aesthetes and donned lewdly by Rihanna, the choices made by the church’s own leaders have played as much of a role as the anticlericalism of Proust’s era.

Make it all into a joke.   This is Satanic.

As I read that, I was reminded of the scene in the book Voyage to Alpha Centauri by Michael D. O’Brien  US HERE – UK HERE

The colonists have arrived on the new planet and they discover a temple with strange writings, which they eventually decipher.  They describe rites and some of the colonists decide to recreate and perform them.  However, they are in actuality summoning the demon that destroyed the previous occupants.  Here’s an excerpt:

Day 369: Green Day again. A year has passed since the previous exercise in elevating our cosmic sensitivities, or “interplanetary bio-consciousness” as it is called officially. There are few people onboard the Kosmos at present, so the green banners, scarves, and neckties were scarce here. Down on the planet, however, festivities were in full swing. On the panorama screen, I watched a few celebrations at various stations, dominated by an incompatible mixture of ecological cant and jargon and an any-excuse-for-a-party attitude, seasoned with mystical music. One particularly nauseating performance occurred in the temple itself. There, accompanied by the piped-in music of flutes and drums, a bevy of maidens danced around the black altar cube. They were dressed in diaphanous green gowns that left nothing to the imagination. Somewhat frenzied, nearly erotic, and definitely euphoric, the ten young women twirled and pranced and sang in praise of a cosmic “lord” who held fire in one hand and arrows in the other. Their choreography resembled a coil, winding and unwinding hypnotically as they chanted. At the head of the dance, leading it all, was the old Russian psychiatrist lady who had been so offended by me looking at her scar years ago. She was now without doubt far into her eighties, which was unfortunate, since her gown was the flimsiest of all, nearly transparent. With flailing arms, she repeatedly let fly full-throated cries rising from her arching abdomen, a crone-nymph on hallucinogens. As the event progressed, a soft, male voice-over informed the viewers of our need to reconnect to primitive “spirituality”, which entailed, apparently, a “rediscovery of the phallic” (thankfully not acted upon, at least not on screen, as far as I know, which isn’t saying much) and a “reintegration of light side and shadow side” for the sake of universal harmony. (Ay, caramba! I turned it off and went for a long walk.)

Fr. Z is the guy who runs this blog. o{]:¬)
View all posts by Fr. John Zuhlsdorf →
This entry was posted in You must be joking! and tagged Metropolitan Museum of Art. Bookmark the permalink.