A Solemn Mass in Albany in the presence of the bishop. Wherein Fr. Z rants.

The esteemed Deacon Kandra posted – picking up on some Facebook page or other (I don’t like Facebook) – that a Solemn Mass was celebrated on Trinity Sunday in the Roman Church’s traditional form at the St. Mary’s in Albany, NY. From Rev. Mr. K (my emphases and comment):

This popped up on the Facebook page for the Diocese of Albany, and it’s worth noting:

Solemn High Mass in the Presence of the Ordinary to commemorate the 20th Anniversary of The Extraordinary Form in the Albany Diocese. Both Bishop Edward B. Scharfenberger and Bishop Emeritus Howard Hubbard concelebrated.  [Ummm… no.  They didn’t.]

The Mass took place at St. Mary’s Church in Albany. 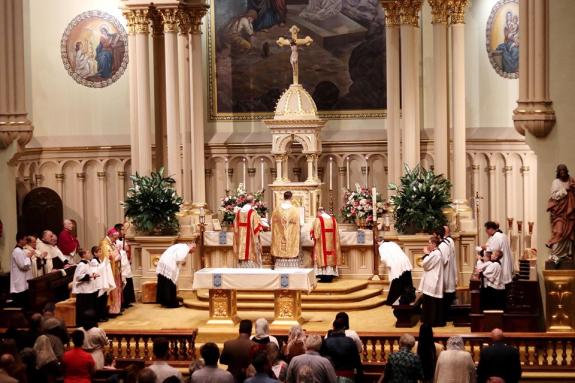 A few people have noted that there is no “concelebration” in the Extraordinary Form. It appears, however, that Bishop Scharfenberger and Bishop Emeritus Hubbard both took part.

Yes, they “took part”, but they did not concelebrate.

Let me rant about this for a little bit.  And, believe me, I am not slinging arrows at Deacon Kandra.  Moreover, I renew an invitation to him anytime he is in WI to come to learn to act as deacon in the Roman Rite.  I’m sure he would like to learn to do that.

However, allow me to riff a little on the “concelebration” thing for a moment.

What Deacon Kandra get a little wrong here is that, there was NOT concelebration in the modern, common usage of the word. What happened was Solemn Mass in the presence of the Diocesan Bishop.  A priest said the Mass and bishops were present.  In this case the variant was that the bishop, the diocesan ordinary, participated in cope and miter. There are also provisions for the bishop to be in cappa magna.

Here’s a shot of the late Extraordinary Ordinary at the First Mass of a priest.  The bishop is in cappa.

As for the presence of the bishop emeritus (Hubbard…not exactly a friend of tradition, he), he was simply in choir dress and in choro. In a generic sense of “concelebrating” they were “concelebrating”, but there was only one celebrant, the priest saying the Mass.  Bp. Scharfenberger “presided” so to speak, but not as celebrant.  Bp. Hubbard was in choir and he helped with Communion.  There’s another term that get’s mixed up.  In NovusOrdoese “preside” often is applied to the priest celebrating the Mass, “Good morning everyone!  Today’s presider is Fr. Jasmine of the Society of Jesus… open your worship aids to page….”

Here’s where you can see the Great Divide made manifest.

Again, I’m not trying to beat up Rev. Mr. Kandra.  Nemo dat quod non habet.  If you have not learned all this technical stuff from the older rite, then you pull out terms from the Novus Ordo and your own experience to fill in the blank.  But the older, traditional form has levels of celebration that the extremely flattened Novus Ordo eliminated.

Here’s where I want to rant a little.

In just a few decades, even clerics aren’t really sure about what is going on in our Church’s Roman Rite.

Remember: I maintain that a Roman Catholic cleric who doesn’t know also the Extraordinary Form, doesn’t really know his own Rite.  It’s one thing when men ordained before the Emancipation Proclamation was issued (aka Summorum Pontificum), but it is entirely another afterwards.  This is because at ordination someone has to stand up and attest that the ordinands are well trained.  But if they don’t know their Rite, they are not well-trained.   However, now that Summorum is out, and at least juridically there are two forms of the one Roman Rite, then ever cleric who does not know the traditional form is obliged to learn it and learn it NOW.

This is for the sake of their own professional integrity and identity, if nothing else.

Consider, for example, the graduation of a medical doctor who perhaps studied pathology, pharmacology, and maybe specialized in endocrinology, but didn’t get into all that anatomy and biochemisty stuff. Image a lawyer being passed to the bar without having studied civil procedure, constitutional law, or contracts. How about a doctorate in French literature without knowing French?

I suggest that a physician, lawyer, or professor worth their salt would, upon discovering a big gap in their tool box, move heaven and earth to get those tools!

Professionals are expected to know the tools of their trade, basic and advanced. Priests are to know the Rites of their Church. The Roman Rite is more than the Novus Ordo, in English, “facing the people” with a four-(Protestant) hymn sandwich to the accompaniment of a piano.   It’s a great deal more than that.   Just because “that’s what we do every weekend done at St. Idealia” in the Diocese of Libville under Fr Bruce Hugalot , and the actual Roman Rite doesn’t seem to be very useful there, that doesn’t exonerate clerics from learning their Rite!   There is also the issue of identity and integrity.

That goes for Catholics in the pews and clerics at the altar.  We are our rites.  And if you don’t know and never experience half your Rite – nay, rather far more than a mere half – the… who the heck are you?

If I wanted to by B-Ritual, say, Ukrainian, I’d have to work hard to learn the liturgy!  I’d have to learn Ukrainian, too, though some of their worship is in the vernacular.  It would be hard.  But if I respect it and the people… I’d do the work.

The late Bishop Morlino, above, told his seminarians that he wanted them to know, before ordination, the traditional Roman Rite.   He didn’t impose it (“Learn it or else!”).  He wasn’t expecting that they had to use it all the time.  But he wanted them to know it.  And, I can say for sure, that has had a real impact on the ars celebrandi of the men who were thereafter ordained.

Let me approach this another way, from the affective side rather than the intellectual side.

When you love someone, you want to know all about that person, all their little foibles.  And, learning those little foibles, even some of the annoying ones, you love them more deeply.  You engage your will and you reach out with your mind and heart to embrace the person as he or she is.  You delight in making your loved one more comfortable or more beautiful or better educated or… whatever is the true good for that person.  You’ll take care of the house and keep it clean and beneficial.  Food preparation will reflect your esteem.  Etc.

If a priest loves his Church and the Rite he belongs to, then he wants to know all about the Church and her Rite.   He want’s the whole scoop, all the reality of her history, all the ins and outs.  And because the most important thing that his Church does is worship God with sacred liturgical rites, then he should want to know all the ins and outs of those rites.  No?  If you love, you want to know and you want to do the very best you can, and not some slip-shod job, or something half way.   You want it all.  You’ll make God’s house lovely.  Worship will be greatly adorned with the best you can manage.  Etc.

Does that sound right?

I am very encouraged by the growing number of occasions for the use the traditional Roman Rite and the questions that arise and the issues that pop up as a result.  This is a time of mutual enrichment, as Benedict XVI wanted.   This occasion in Albany was an opportunity for mutual enrichment: it raised questions and issues for those who aren’t that familiar with it.  Armed with more knowledge, they will probably – from love of the Church – desire to flesh out than knowledge and learn more and then apply it where they serve!

Part of the problem is that subtlty has been lost.  The Novus Ordo shoves everything straight at you.  Talk talk talk… sound sound sound.  And there is a tendency to flatten it all out, so that it is “generic” and without variation.  There”s little difference from day to day even for big occasions.

On the other hand, the traditional Roman Rite had many layers of celebration from extreme simplicity up to supreme complexity.  If memory serves there are four ways for a Solemn Mass to be said in the presence of a bishop, depending also on that bishop’s office.  It was worked out.  And it worked.   And those workings-out provided great freedom…. and subtlety.

Again, when you love, you allow for complexity.  Subtlety is delightful.  You enjoy texture and contour rather than flatness and sameness.  The genius of the Roman Thing, Romanitas, in liturgy is that there can be multiple things going on at the same time.  There are concise, even terse prayers, and then elaborate gestures.  There are layers and subtlety.

We are our rite.

Fr. Z is the guy who runs this blog. o{]:¬)
View all posts by Fr. John Zuhlsdorf →
This entry was posted in "How To..." - Practical Notes, Liturgy Science Theatre 3000, Mail from priests, My View, Wherein Fr. Z Rants and tagged D. Albany, Dcn. Kandra, Solemn TLM. Bookmark the permalink.