I have an affection for today’s saint not only for the way in which he died (a way of being treated familiar to many priests of more traditional leaning) but also because my first ecclesiastical office was as rector of a small 700 year old church in Italy named for Sts. Peter and Bartholomew. Why it was named for that pair of saints is something lost in time, I fear.

You readers can tackle that for us.

This is from Augustine’s Tractate on the Gospel of John 7 (on John 1:34-51 – emphasis and comments mine, but not the translation).

20. Jesus then saw this man [Nathaniel = Bartholomew?] in whom was no guile, and said, “Behold an Israelite indeed, in whom is no guile.” Nathanael saith unto Him, “Whence knowest Thou me?” Jesus answered and said, “Before that Philip called thee, when thou wast under the fig (that is, under the fig-tree), ….

21. We must inquire whether this fig-tree signifies anything. Listen, my brethren. We find the fig-tree cursed because it had leaves only, and not fruit. In the beginning of the human race, when Adam and Eve had sinned, they made themselves girdles of fig leaves. Fig leaves then signify sins. Nathanael then was under the fig-tree, as it were under the shadow of death. The Lord saw him, he concerning whom it was said, “They that sat under the shadow of death, unto them hath light arisen.” What then was said to Nathanael? Thou sayest to me, O Nathanael, “Whence knowest thou me?” Even now thou speakest to me, because Philip called thee. He whom an apostle had already called, He perceived to belong to His Church. O thou Church, O thou Israel, in whom is no guile! if thou art the people, Israel, in whom is no guile, thou hast even now known Christ by His apostles, as Nathanael knew Christ by Philip. But His compassion beheld thee before thou knewest Him, when thou wert lying under sin. For did we first seek Christ, and not He seek us? Did we come sick to the Physician, and not the Physician to the sick? Was not that sheep lost, and did not the shepherd, leaving the ninety and nine in the wilderness, seek and find it, and joyfully carry it back on his shoulders? Was not that piece of money lost, and the woman lighted the lamp, and searched in the whole house until she found it? And when she had found it, “Rejoice with me,”

she said to her neighbors, “for I have found the piece of money which I lost.” In like manner were we lost as the sheep, lost as the piece of money; and our Shepherd found the sheep, but sought the sheep; the woman found the piece of money, but sought the piece of money. What is the woman? The flesh of Christ. What is the lamp? “I have prepared a lamp for my Christ.” Therefore were we sought that we might be found; having been found, we speak. Let us not be proud, for before we were found we were lost, if we had not been sought. Let them then not say to us whom we love, and whom we desire to gain to the peace of the Catholic Church, “What do you wish with us? Why seek you us if we are sinners?” We seek you for this reason that you perish not: we seek you because we were sought; we wish to find you because we have been found. 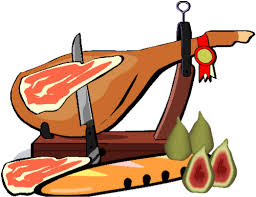 I can’t think of a better way to honor the saint today’s than eating ficchi e prosciutto that is, figs with prosciutto, both for the image from the Gospel and also for the thinly sliced strips of raw meat, which is more than appropriate today, and wondrous to taste I must say.

If you can’t get figs for that prosciutto, try a melon such as cantaloupe.

Here is the Church in Rome where the body of the Apostle is found. San Bartolomeo is on the island in the Tiber River. Fr. Z is the guy who runs this blog. o{]:¬)
View all posts by Fr. John Zuhlsdorf →
This entry was posted in Saints: Stories & Symbols and tagged figs, prosciutto, St. Bartholonew. Bookmark the permalink.