Some years ago, when in my church in Italy I regularly had sung Novus Ordo Masses in Latin, with Gregorian chant and polyphony by Palestrina and Giovanelli, I was accused by liberal priests that I was not allowing the poor and the simple people to “participate”.   That was absurd, of course.  The idiot argument ran that the poor and the simple (a typically liberal condescension) didn’t appreciate or understand chant or polyphony.  Therefore, using that sort of music was somehow oppressive.  (My retort was that they though that beauty was only for the wealthy elite.  Keep in mind that those clerics were probably Communists.)

The fact of the matter was, however, that the church was more and more crowded on the days we had the glorious music, as word got around, by precisely the simple and poor people of the neighborhood.  It helped that the choir was outstanding, as is typical of small Italian towns.

I reject the liberal elitist attitude that the simple people – down there around their liberal ankles – must be fed a stream of bland pabulum, unworthy of sacred liturgical worship, beneath our true Catholic identity. 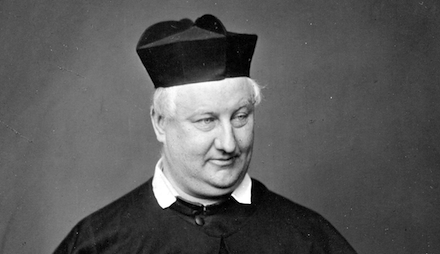 There is a fine piece today from The Catholic Herald, the UK’s best Catholic weekly.  The article helps to explode the a shallow and false liberal trope, namely, that doctrine is opposed to charity, that the intellectual is opposed to the pastoral, that elevated liturgical worship denies something to Los Pobres.

Preaching in Rome last Holy Thursday Pope Francis exhorted priests to be like shepherds who “take on the smell of their sheep”. This is an image that could have been crafted with Fr Wilfrid Faber in mind. While founding the London Oratory in the middle of the 19th century, Faber not only lived with the odour of his flock; he also exposed himself to the contagions that infected it and even gave nourishment to its fleas.

Blessed Pope Pius IX had asked the English Oratorians to employ themselves primarily in the conversion and instruction of the “educated classes”. The opening of the London Oratory in its first premises near the Strand, however, coincided with an overwhelming influx of Irish immigrants fleeing famine. Faber immediately found himself immersed in corporal works of mercy among the capital’s most desperate inhabitants.

Within two months of opening in May 1849, his new chapel had to be closed for de-infestation. The stench inside was said to bring on fits. Cholera and influenza were endemic in the neighbourhood. Fleas had invaded the Fathers’ cassocks, confessionals and rooms.

Faber suffered sleepless nights because of the itching. He nevertheless summoned enough energy to establish the Company of St Patrick, enlisting laity as “visitors” to patrol the local slums and “affectionately force” the Catholics they found there to return to the sacraments. [Read: A model for the New Evangelization?] The Company opened reading rooms across London and encouraged social cohesion through concerts and other entertainments. In Bloomsbury the Fathers opened the first Catholic “Ragged School”.

With the Oratory’s re-location to a more tranquil base in South Kensington in 1854, Faber might have imagined himself free to minister to the spiritual formation of his “poor Belgravians”. But the real poor followed him. A contemporary account describes Catholics from “the vile purlieus of Drury Lane” making pilgrimages across Hyde Park to be elevated by “all that is grand and solemn and sublime in the ceremonies of the Church”. Evidently there was no suggestion in those days of any dichotomy between solemnity in liturgy and ministry to the poor. Worshipping God in the beauty of holiness was seen as an instrument of “social outreach” in itself.

That’s what I’m talkin’ about!

You may not be aware that Fr. Faber penned some of the hymns people tend to enjoy singing, such as “Faith of Our Fathers”.

There is a lot more to this article and I encourage you to go over there and read the whole thing.  Fr. Large is a fine writer.  Farther along he drills into the complex character of Fr. Faber as well as the spirit of St. Philip Neri (a great personal patron of mine, on whose feast I was ordained).