In a way what follows echoes the post about concerts in churches.  HERE  What is appropriate in a church and what is not? 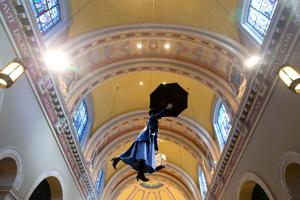 This remarkable bit of news is from Omaha.com:

Kelly: With a pair of bolt cutters and sense of indignation, custodian cuts down what flies in church

A Mary Poppins mannequin hung from the ceiling at St. Cecilia Cathedral [?!?  No, really.  There’s a photo.] for its 31st annual flower festival, but a custodian used bolt cutters to send it crashing to the floor on the first morning of the event. The custodian said he hopes the incident sparks “conversation” about what types of displays are appropriate in a church.

On the first morning of the 31st annual Cathedral Flower Festival, with its theme of “A Night at the Movies,” an agitated church custodian made a bold move.

Mark Kenney, 59, who grew up in the parish, had worked at St. Cecilia Cathedral for three years. Around 8 a.m. on Jan. 29, he went to a work shed, picked up a pair of heavy-duty bolt cutters and ascended to a catwalk high above the mostly empty nave, or main sanctuary.

He looked through a peephole, he said, to make sure he wouldn’t hurt any people. And then he cut a steel cable, which sent a suspended, umbrella-carrying, hat-wearing Mary Poppins figure crashing to the floor.

Kenney then went downstairs and removed a cardboard Buddha figure from the Nash Chapel, which also featured costumed mannequins from “The King and I.” [?!?] He threw the Buddha out one door and proceeded to toss costumed mannequins out two other doors.  [Good grief! Who thought these were good ideas?  Read on…]

Someone alerted the pastor, the Rev. Michael Gutgsell, who ran from the rectory next door to the church and saw Kenney.

“Father, it was me. You need to call the police.”

Gutgsell had known that his custodian had misgivings about secular displays in the church but says he was dumbfounded and didn’t understand why Kenney would take such drastic action. [It was indeed dramatic, if not drastic.] In a brief meeting that week, the pastor said, he had asked for Kenney’s promise not to be disruptive.

Now the priest was shocked, saying, “You promised!”

In response, Kenney said, he lashed out. “I started screaming, ‘Father, this is bullshit! We can’t have this in the church. This isn’t culture, it’s Disney crap!’?” [Oh my!]

Kenney — who has served three terms of up to six months in federal prisons for crossing security lines at military bases in protest of nuclear weapons — then knelt at the communion rail and prayed until officers arrived and handcuffed him.

He spent a night in jail before he was bailed out and pleaded no contest. He said he is scheduled for sentencing “on Holy Thursday,” March 24.

Damaging items at the flower festival was wrong, and Kenney said in an interview this week that he will make restitution. But he says secular items such as movie characters are inappropriate in the sacred space of the cathedral and amount to sacrilege and idolatry.  [Is he right? Buddha?]

Gutgsell, a former chancellor of the Omaha Archdiocese and a Catholic University-licensed “canon lawyer,” an expert in church laws and rules, disagrees.

“Obviously, context is everything,” the priest said, noting that the cathedral also is home to about six concerts a year. No sacrilege or disrespect is conveyed, he said, in the concerts or the dozens of exhibits at the flower festival.  [Mary Poppins and Buddha?  Here’s a question: Is it okay to play a non-sacred work on a pipe organ in a cathedral church?  Some compositions written for pipe organ are not explicitly sacred.]

“Cathedrals,” he said, “are kind of the epicenter for culture presentation and development.”

Eileen Burke-Sullivan, a theologian and vice provost for mission and ministry at Creighton University, said she sees no problem. The cathedral and the archdiocese, she said, have supported the arts in Omaha for many years.

“In mixing thematic popular culture with the beauty of God’s creation in flowers,” she said, “I don’t think there’s any inherent idolatry.”

Remember, read the whole article and think before posting.

That said, I received this from a reader:

The Cathedral has one of the best choirs in the US and often chants in Latin.

Fr. Z is the guy who runs this blog. o{]:¬)
View all posts by Fr. John Zuhlsdorf →
This entry was posted in Hard-Identity Catholicism, Our Catholic Identity and tagged Archd. Omaha, Concerts in Churches, idolatry, sacrilege. Bookmark the permalink.