“How unspeakably cold is the idea of a Temple without that Divine Presence!”

The UK’s best Catholic weekly, the Catholic Herald print edition (not online), had a great piece by the renowned Newman scholar, Fr. Ian Ker about Newman’s conversion and the Real Presence in Catholic churches.

Here it is in toto:

Before Newman’s conversion, he avoided Catholic churches.
Then he discovered what made them unique

The story of Newman’s conversion to Catholicism is not quite the same as his subsequent discovery of Catholicism. There were then very few Catholic places of worship, and, in any case, to avoid the charge that the Oxford or Tractarian Movement was really just a preparation for conversion to the Church of Rome, Newman had carefully avoided Catholics and Catholic services, even when he was on his Mediterranean tour of 1832-3 and when he could hardly avoid being exposed to both.

And so it was that the feature of his new religious life as a Catholic that most struck him came as a complete surprise – namely, the reservation of the Blessed Sacrament in Catholic churches. He wrote in a letter to a close friend, herself about to become a Catholic a few months later:

We went over not realising those privileges which we have found by going. I never allowed my mind to dwell on what I might gain of blessedness – but certainly, if I had thought much upon it, I could not have fancied the extreme, ineffable comfort of being in the same house with Him who cured the sick and taught His disciples … When I have been in Churches abroad, I have  religiously abstained from acts of worship, though it was a most soothing comfort to go into them – nor did I know what was going on; I neither understood nor tried to understand the Mass service – and I did not know, or did not observe, the tabernacle Lamp – but now after tasting of the awful delight of worshipping God in His Temple, how unspeakably cold is the idea of a Temple without that Divine Presence! One is tempted to say what is the meaning,  what is the use of it?

It is remarkable how it was the reservation of the Blessed Sacrament in Catholic churches that more than anything else impressed and moved Newman, even more than the Mass itself. And it tells us something very important not only about Newman but also about a central aspect of the impact of Catholicism on the imagination of the 19th-century English Protestant convert. Thus Newman is not only making a devotional and spiritual point when he writes to an Anglican friend:

I am writing next room to the Chapel – It is such an incomprehensible blessing to have Christ in bodily presence in one’s house, within one’s walls, as swallows up all other privileges … To know that He is close by – to be able again and again through the day to go in to Him …

Newman is saying something very  significant about objectivity and reality.

For it was that concrete presence of Jesus in a material tabernacle which, for Newman, above all produced that “deep impression  of religion as an objective fact” and which so impressed him about Catholicism. He admired “every where the signs of an awful and real system”.

When Newman arrived in Italy a year later to prepare for the priesthood, he was immediately and vividly aware of a reality that powerfully impinged on his imagination, but of which he had been oblivious on his previous visit. Arriving in Milan, he immediately noticed that he had now an added reason for preferring classical to Gothic architecture, since its simplicity meant that the high altar stood out as the focal point of the church, with the result  that the reserved Sacrament had particular prominence – for “nothing moves there  but the distant glimmering Lamp which betokens the Presence of our undying Life, hidden but ever working”.

His almost obsessive preoccupation with this “Real Presence” was more than simply devotional: “It is really most wonderful to see this Divine Presence looking out almost into the open streets from the various Churches … I never knew what worship was, as an objective fact, till I entered the Catholic Church.” 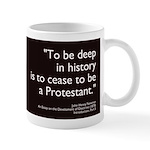 For what Newman had discovered  was that the objectivity of the worship  which so impressed him only reflected the objectivity of Catholicism, which he came to believe was a quite different religion from Anglicanism or Protestantism. Now he was delighted to find, as he thought, “a real  religion – not a mere opinion such that you have no confidence your next door neighbour holds it too, but an external objective substantive creed and worship”.

Newman’s fascination with the  reservation of the Sacrament reflects  his celebrated philosophical distinction between the notional and real, notions  being intellectual abstractions and the real what we personally and concretely experience. Catholics, he insisted, worshipped not dogmatic definitions but “Christ Himself”, believing in the “[Real] Presence in the sacred Tabernacle not as a form of words”, or “as a notion, but as an Object as real as we are real”.