Pontifical Mass in Lake Charles. A brief and yet optimistic rant from Fr. Z. 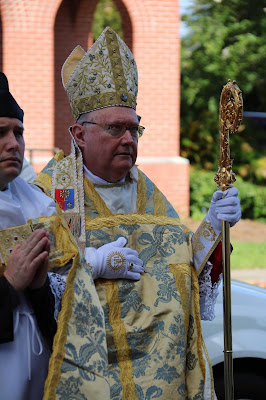 I saw a great entry at NLM about a Pontifical Mass in Louisiana.  There are good photos. Check it out.

His Excellency Glen Provost, Bishop of Lake Charles celebrated a Pontifical Mass in their cathedral.

Writing about it, Greg DiPippo aptly adds (me emphases and comments):

Anyone who has ever served this rite of Mass knows that it is especially hard work, something which requires a good amount of organizing and rehearsal to do properly; the reward for such work is, of course, a ceremony which truly impresses upon one, forcibly and unmistakably, the power and majesty of what the Holy Sacrifice of the Mass truly is. We can all take encouragement once again from the fact that none of the people who are making the effort and commitment to put this together are old enough to be doing so from any sense of “nostalgia”; what we see here is a true and sincere love for the richness of our Catholic liturgical tradition.

And they had to work around that free standing altar, too.

Many kudos to the Bishop and to the priests and servers.

I would like to think that, perhaps, just maybe, there is a chance that the work we have been doing in Madison, and the fine example set by the Extraordinary Ordinary Bp. Morlino has been an influence on priests, groups of lay people who get organized, and even on Bishops.   Just maybe?   Perhaps priests and lay people out there have looked at the photos here and at the TMSM site and have thought, “Okay.  WE can do that!”  And they get to work.

It seems to me that – recently – more bishops are willing to celebrate the Traditional Roman Rite than even a few years ago.

In any event, I know that we are all mutually encouraging each other in this effort of ours to promote beautiful and transformative sacred liturgical worship.

We are all helping each other.

I have some good news from France…

A priest friend is training up in the TLM the new rector of a seminary.  He also wrote about the bishop of a French diocese who says the TLM regularly.   I don’t want to add names or just post his text, unless he wants me to.  However, let’s just say that his news was very good.