These days it is hard to look around and not wonder if we are at last really in the End Times.  We seems to be experiencing the Great Falling Away.  Signs and signs and signs of faster and faster autodestruction flow over us.

Just to brighten your day…

First, I read at the always cool Spaceweather that your planet just ran the gauntlet.

DRACONID METEOR OUTBURST: On Oct. 8-9, Europeans outdoors around midnight were amazed when a flurry of faint meteors filled the sky. “It was a strong outburst of the annual Draconid meteor shower,” reports Jure Atanackov, a member of the International Meteor Organization who witnessed the display from Slovenia. Between 22:00 UT (Oct. 8) and 01:00 UT (Oct. 9), dark-sky meteor rates exceeded 100 per hour. In eastern France, Tioga Gulon saw “1 to 2 meteors per minute,” many of them shown here in an image stacked with frames from his video camera:

“It was a rare and impressive event,” says Atanackov.

It could easily have been 10 times more impressive. In fact, Earth narrowly dodged a meteor storm.  [Meteor STORM.]

The European outburst occurred as Earth skirted a filament of debris from Comet 21P/Giacobini-Zinner. If that filament had shifted in our direction by a mere 0.005 AU (~500,000 miles), Earth would have experienced a worldwide storm of 1000+ meteors per hour. These conclusions are based on a computer model of the comet’s debris field from the University of Western Ontario’s Meteor Physics Group. Here it is, showing Earth shooting the gap between two filaments of comet dust: 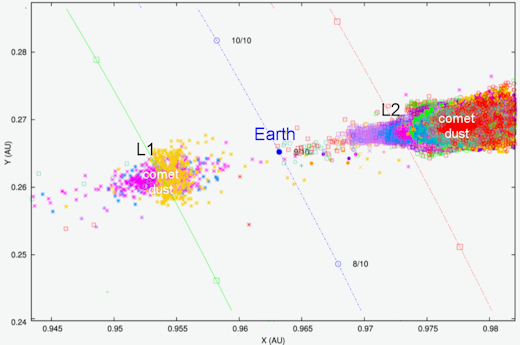 Western Ontario postdoctoral researcher Auriane Egal created the model and predicted the outburst before it happened. Egal’s model was in good agreement with a rival model from NASA, so confidence was high. Meteors seen over Europe came from the larger filament on the right.

It goes on to describe how meteor forecasting allowed NASA to shut down some satellites and reposition them so that their harder sides were toward the comet dust.

So, that’s one bullet, or a gazillion, dodged.

Another comes in the form of damn scary story in German sent by a Doctor/Scientist/Researcher of my acquaintance.

Worrying decrease in male fertility due to more and more estrogens

This is a world-wide phenomenon and the consequences could truly be dire.   You can use translation tools for the whole article.  Here are a few pulls:

It was not until September 2018 that the US newspaper Newsweek wondered who was responsible for the death of America’s sperm. Vox published seven questions that we probably did not dare to explain for fear.

Professor Shanna Swan of the Icahn School of Medicine at Mount Sinai Hospital in New York wrote, “In the past 40 years, the sperm count has been halved.”

The danger that we would no longer be able to have children by natural means is still a long way off, yet male fertility provides an indication of his health: those with the lowest sperm quality had the highest probability of dying soon. Whatever restricts the fertility of the man is responsible for premature death.

Feminization has been going on for the last ten years. Alpha males are no longer there. Instead, they wear tight-fitting jeans, a topknot and behave increasingly like little girls. Real men are dying and women no longer want to deal with effeminate men.

Strictly speaking, this means that our Western civilization is dying out because it simply fails in the fulfillment of the task of creation.

Actually, one observes the loss of sperm count already in early 1990. Whether it is a coincidence that we began genetically manipulating our crops in these years, is an open question. In the 1970s and 1980s research focused on atomic and other carcinogenic environmental toxins.

Synthetic estrogens come from animal husbandry. Phytoestrogens are found mainly in soy, but also hops (beer). Estrogen-like chemicals are found in pesticides and plastic products. In addition, you can not filter out estrogen-containing contraceptives or pills hormones from the treatment plants, which we consume it with our drinking water.

We live in a “lake full of estrogens,” say the scientists. First and foremost, Colborn, who was the first to speak of genital malformations, which develop before birth and result in a lifelong reduction in sperm quality. The threatening, rapidly spreading evil is a flood of estrogens that feminize the drowning men in the end.

Whomever you blame, be it our mobile phones, rising temperatures, agriculture, pill or petrochemistry, it’s clear that in 2017, 3.85 million babies were born in America. With six births in 100 women of childbearing potential, blessing is as low as in a long time.

This is a real thing.  More and more I hear of… problems.

And if you don’t think there is a connection between the two, then you are, so to speak, nuts.

Fr. Z is the guy who runs this blog. o{]:¬)
View all posts by Fr. John Zuhlsdorf →
This entry was posted in Global Killer Asteroid Questions, Look! Up in the sky!, The Coming Storm, The future and our choices and tagged Draconid Meteor Shower, meteors. Bookmark the permalink.