A detail in a detail in a header on this blog and some details about a liturgical detail.

As you know, the TMSM has obtained a new-old hearse.  THANK YOU, MB, for the generous donation!

A Tenebrae hearse is a pavement standing candelabra with 15 candles. After each psalm of Matins and Lauds a candle is snuffed until just one is left. It will be removed from the hearse at the end of Lauds as the final antiphon is sung. Then the schola pound the stalls or benches until it is brought back and placed, like the resurrection, atop the hearse again.

Here’s a triangular harrow from the Flemish Fécamp Psalter (c. 1185 – probably Eleanor of Aquitaine’s prayer book! You remember her from The Lion In Winter… Katharine Hepburn. US HERE – UK HERE) So, a Tenebrae hearse is so called because it looks like a big rake with candles for wolfish teeth… all the better to see you in the “shadows”. 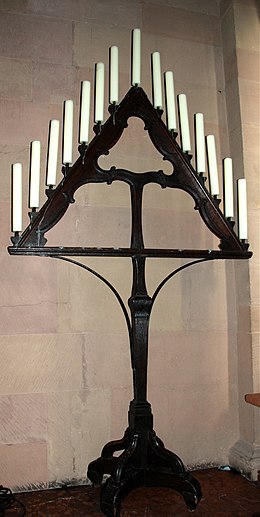 I just noticed in one of the headers that rotate through the blog’s pages, that there is a hearse in the background!  It isn’t a tenebrae hearse, however.

This is a detail from a 1885 painting “La Restitution à la Vierge le lendemain du mariage”  or “Offering to the Virgin the Day After the Wedding” by the naturalist Jean-Eugène Buland (1852–1926).  It hangs in the Musée des Beaux-Arts de Caen.

Open in a new tab for larger.  Right click, etc.  And, big, HERE

I don’t know much about the painter, but he has done more “prayer in chapel” genre paintings.  HERE and HERE

There are lighted candle on the hearse, used for devotional purposes near the picture of Mary that is tacked up on the wall.  The altar cloths don’t reach the floor on either side.  It could be that this Marian side altar is used as the altar of repose.  Also, there is only one step.   Mister’s hat is on the bench, the opening upward, which is correct.   The side bench has pew tax numbers, though the others don’t.  The older woman, Maman, in the pew has her well-worn prayer book open.  She wears a crucifix and perhaps another religious medal on the longer chain. Have they been there for a while.  On the bench next to Mister, is a prayerbook and what looks like a white rose.  He has one in his lapel.  Maman doesn’t look overjoyed and Papa is stoic.  Mister is looking a bit … what?… apprehensive?   But this is after the wedding and the wedding night.  Right?   Missus, at the altar isn’t overly thrilled either.  She has taken off her shoes.   As if going to the burning bush… barefoot.  Of course lay people didn’t usually go up to the altar.  Barefoot.

I think she’s pregnant and this was, perhaps a quickly arranged marriage.

His painting “Alms of a Beggar” has wedding imagery and drips of irony.  Buland has something going on in his paintings.    As does THIS.   And … wow… THIS.

Fr. Z is the guy who runs this blog. o{]:¬)
View all posts by Fr. John Zuhlsdorf →
This entry was posted in SESSIUNCULA and tagged header, hearse. Bookmark the permalink.