Check down at the bottom for more recent updates!

At this time, there are only 3 views.  That will increase.  And, when you’ve enjoyed this, make a contribution to his campaign.

The other day, under another post, I suggested some help for a seminarian in the ICK who has a seminary bill for $20K.  Yes, 2 with 4 zeros.

Did you know that priests used to have to pay for their own seminary training?  I had to.  I worked through seminary and paid it off along the way with very little help from the diocese… except for the permission to work, that is.

Anyway, if we want priests, we had better step up.  BONUS: Funny story about this below.

Tell him Fr. Z sent you.

So, a seminarian of the ICK in their seminary in Italy is underwater to the tune of 20K.  He started a GoFundMe campaign, but set it only for $5000.  I asked help for him and you came through.  Then I got this note from him…

I knew it from the very beginning of this campaign and only a “Fr-Z effect” could do anything for my fundraising campaign and good Saint Joseph brought you to me… Thank you Father. I owe this to you. …

Then he described how he was without internet connection for a couple days before he resent his campaign goal to what he truly needs rather than what he, less than optimistically originally set. 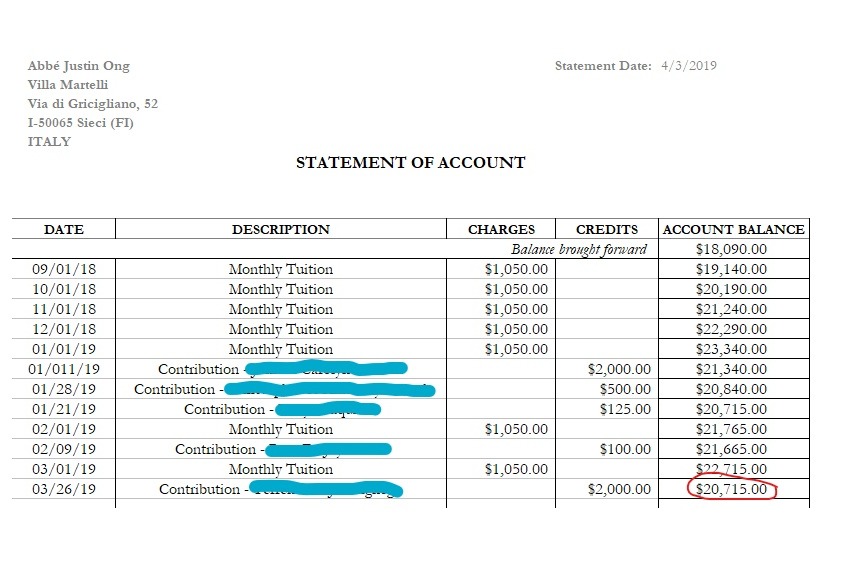 I know we can.  Tens of thousands read here.  We can do it.

Tell him Fr. Z sent you. And speaking of bricks, here is the funny story I promised about a priest paying back his seminary bill.

After ordination a priest friend of mine started to receive monthly bills for seminary.  The problem is that the seminary training was so horrid that he didn’t want to pay for it.  They had contracted for a Catholic seminary training and he didn’t get it.  Resentment doesn’t begin to describe having to pay for that evil crap.  As it turns out, the seminary sent bills with a postage guaranteed labelled envelope.  So, he started to send in payments with the enveloped taped to a brick or a concrete block.   It cost the seminary so much that they eventually begged him to stop.

A photo of the check he wrote to the ICK… yes, the money is going to its proper destination. The fundraising should reach $10,000 soon but I believe that’s the best we can do for now. I’ll wait a while for Providence to replenish the financial resources of your flock before I revive campaign (like Eliseus and the vessels of oil “And when the vessels were full, she said to her son: Bring me yet a vessel. And he answered: I have no more. And the oil stood”).

Silly boy.  Perhaps we should teach him that you can’t give up too quickly.

There are more of you out there. Okay… here we are. How about this…? While you are all on your resurrection and sugar highs, will you give this seminarian a few bucks so he can hit his goal? Also,… let’s get him off this blog, okay? o{];¬)  Put him out of his and my misery?   How about by the end of Easter Sunday? C’mon, folks?  Please?  Can we kill this off?  Also, he updated his fundraiser image (at long last!).

No, he’s not the one in the center.

Fr. Z is the guy who runs this blog. o{]:¬)
View all posts by Fr. John Zuhlsdorf →
This entry was posted in ACTION ITEM!, Priests and Priesthood, Seminarians and Seminaries and tagged ACTION ITEM. Bookmark the permalink.