I had a note today pointing me to SpaceWeather (which I regularly monitor) which has a post about new spots on your planet’s yellow star.   These spots herald Solar Cycle 25, because they have a distinct signature.

SUNSPOTS FROM THE NEXT SOLAR CYCLE: Solar Minimum is here, but it won’t last forever. In fact, the next solar cycle made a brief appearance this week. On July 1st, a small sunspot materialized in the sun’s southern hemisphere (S21W02), then, hours later, vanished again. The polarity of its magnetic field marks it as a likely member of Solar Cycle 25: 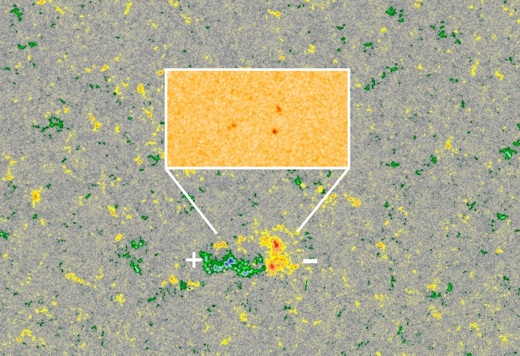 Southern sunspots from old Solar Cycle 24 have a -/+ polarity. This ephemeral sunspot was the opposite: +/-. According to Hale’s Law, sunspots switch polarities from one solar cycle to the next. The unnumbered sunspot of July 1st appears to be a herald of Solar Cycle 25.

Earlier this year, an international panel of experts predicted that Solar Minimum would deepen in 2019 and begin to rebound sometime next year. The increasing pace of ephemeral sunspots from the next solar cycle is roughly consistent with their forecast.

For those who are not amateur radio operators, the lack of sun spots greatly decreases the activity in your planet’s atmosphere which allows for greater long-distance (DX) contacts between operators.

Eventually, we will emerge from this minimum in the 11-year long cycle.

Meanwhile, hams have gotten busy in other spheres of radio activity, using digital modes.  It is now possible, for example, using the internet to send to a repeater somewhere else in the world, which then transmits in that area.  There are other digital networks too.  These methods are not transceiver through to antenna, off the layers of the atmosphere and bouncing off your planet’s surface, to another antenna and then transceiver, but in the depths of solar minimum, its fun and a new field to develop.  And lots of hams are into tinkering and developing stuff.

ZedNet is Brandmeister DMR worldwide talkgroup 31429.  It was developed by a highly skilled ham who is a longtime reader here, WB0YLE.   It was intended to get ham-readers here talking to each other.

WB0YLE gave me a Bill of Materials (everything you need to get involved).  Of course, you also need a license.  HERE

For you who are into this digital stuff, ZedNet still exists on the Yaesu System Fusion (Wires-X) “room” 28598, which is cross-linked to Brandmeister (BM) DMR worldwide talkgroup 31429.  This gives world-wide multi-mode access to a common ham radio network.

What are we doing with this?  Not much right now, but who knows.  And it’s fun to make it work. In a previous post, I showed the little “hotspot” I use to connect to ZedNet through Brandmeister.  It’s made from a RaspberryPi.   It’s the gizmo that connects the hand-held transceiver to the internet.  I have reduced the elements to a small pouch and I can tether the “hotspot” (the Zumspot in the Bill of Materials compiled by WB0YLE) to my mobile phone and use its data, to to another mobile internet hotspot I have, the KeepGo I often use when travelling abroad.  You can see the Zumspot in the center, with its little antenna.

I like redundancy.  In other words I like backups.  I also like travel convenience.  For example, when I got a new laptop, I bought an extra power source and cord.  I leave one in my bag for travel and one in place at home.  It’s easier that way and I never forget it.

I figured redundancy with the ZedNet Zumspot would be a good thing.  That way I could simply leave everything set up at home and have a matching set in my bag.  Hence, after buying a duplicate handheld transceiver, I pulled up WB0YLE’s list of parts, bought them, and built a new hotspot, a Zumspot.  I used Ham Radio Outlet.  The links for everything are in WB0YLE’s list.  Have a look. There were a couple of tricky moments when you need to keep all the parts together before you tighten up the screws, but it didn’t take long. Have you ever put something together, you think correctly, and, at the end, discovered parts you didn’t use?   “Hmm.. I wonder what these do?”   That was my experience with this.   I had a few parts left over.  I concluded that they were spares and one piece an alternate depending on the variation of Zumspot.  In any event, the little unit (this one has a diminutive screen, lacking on my travel unit), functions flawlessly.

NB: I had originally just bought the ZumSpot.  It came without a case.  As WB0YLE said, you don’t really need a case, but that makes it a bit more delicate.  I used the gizmo perfectly and places a clear plastic cup over it, until the case set (purchased later) arrived.   So, just buy the case at the same time, unless you perhaps want to get creative and make your own.

The radio I use is an inexpensive Baofeng RD-5R.  US HERE – UK HERE.  Happily, it uses the same battery packs as its analogue twin.   It’s a great little radio, for not much bucks.

WB0YLE’s Bill of Materials (everything you need to get involved).  Of course, you also need a license.  HERE

Fr. Z is the guy who runs this blog. o{]:¬)
View all posts by Fr. John Zuhlsdorf →
This entry was posted in SESSIUNCULA and tagged CQ, Ham radio, solar cycle, ZedNet. Bookmark the permalink.