I sense a thriller block-buster movie.  Perhaps I could write the screenplay to include the Secret Vatican Vampire Assassin Squad. 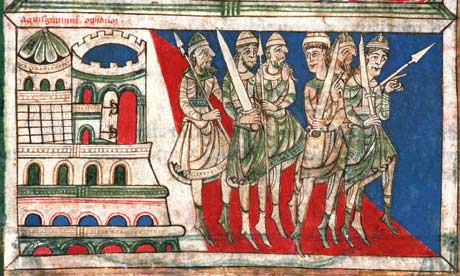 A priceless 12th-century illustrated manuscript containing what has been described as Europe’s first travel guide has been stolen from the cathedral at Santiago de Compostela in northern Spain.

The Codex Calixtinus, which was kept in a safe at the cathedral’s archives, is thought to have been stolen by professional thieves on Sunday afternoon.  [Perhaps there is some secret writing on the back of one of the leaves leading to a treasure under the Church of the Holy Innocents in Manhattan.]

Archivists did not notice its disappearance, however, until Tuesday, when the cathedral’s dean was told it was missing.

“Although security systems have been improved considerably it is true to say that they are not of the kind one might find in a bank or a well-protected jewellers,” the newspaper reported.

Only five security cameras were used to watch the archive area, according to the newspaper, and none were pointing directly at the safe where the priceless manuscript was stored.  [But if the thief was really really fast?]

Police reportedly believe that a black market dealer in antique manuscripts may have commissioned the robbery.

The codex was rarely removed from its safe, with researchers wishing to study it generally being handed a copy kept at the same archive.

The 225 parchment pages include a guide to the pilgrimage routes to Santiago, apparently written by a French friar, Aimeric Picaud.

They also tell the story of how St James the Apostle’s body was supposedly transported from Judea on a raft without oars or sails, which swiftly crossed the Mediterranean and travelled north through the Atlantic before grounding in north-western Spain. From there it was supposedly dragged inland by two oxen, and the body was buried in a forest.

It was only eight centuries later, however, that locals began to claim the tomb of St James could be found there. Pilgrims eventually began to travel to the site, and an 11th-century pope declared that on certain years pilgrims could obtain plenary indulgence for their sins and so avoid purgatory.

The manuscript, apparently commissioned by Pope Calixtus II, helped popularise a pilgrimage that still attracts tens of thousands of people every year.

The author claimed pilgrims travelled from as far away as Scotland, Ireland, Wales, Jerusalem and Asia seeking “mortification of the body, increase of virtue, forgiveness of sins … and the protection of the Heavens”.

His guidebook also included warnings against eating some local fish which would cause you to “die soon afterwards or fall ill”.

Then in other news today…

Santiago de Compostela, Spain, Jul 11, 2011 / 02:01 pm (CNA/Europa Press).- Officials in Spain “have not found any anomalies” in the security at the Cathedral of Santiago after the Calixtinus Codex was stolen July 5.  [Someone on the inside then?  Or is a job for the SVVAS?]

The sources also confirmed statements made by the dean of the cathedral, Jose Maria Diaz, that there was no sign of forced entry into the room where the codex is typically kept. However, it is not known whether the key was left in the safe that held the historic document.

Fr. Z is the guy who runs this blog. o{]:¬)
View all posts by Fr. John Zuhlsdorf →
This entry was posted in SESSIUNCULA and tagged Codex Calixtinus, Santiago de Compostela, St. James, SVVAS. Bookmark the permalink.