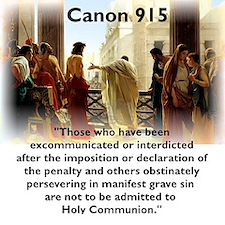 A parish priest helped organize some feedback for a NY congresswoman Kathy Hochul (D-NY 26 – Buffalo) running for re-election, a catholic who supports abortion and Pres. Obama’s attack on the Catholic Church and on the 1st Amendment.

Rep. Hochul is a candidate denial of Holy Communion under Can. 915.

Rep. Hochul, catholic, is a dedicated pro-abortion feminist, committed to raising money for pro-abortion organizations and firmly supported by NARAL.

Rep. Kathy Hochul expected to get some questions on the economy and on gas prices when she met with constituents in New York’s 26th Congressional district last night. Instead, the freshman Democrat got booed by a crowded room over her support for the HHS mandate on contraception and abortifacients, and spent the evening getting an earful from angry voters:

WDTPRS kudos to Fr. Leon Biernat of Our Lady of Pompeii Church and also to 101.7 Catholic Radio.

Any readers in Buffalo?

How about sending some Can. 915 swag to Father and to the people at the Radio Station… and perhaps to Rep. Hochul, with a very kind gift also of assurances of prayers.

Fr. Z is the guy who runs this blog. o{]:¬)
View all posts by Fr. John Zuhlsdorf →
This entry was posted in 1983 CIC can. 915, Dogs and Fleas, Emanations from Penumbras, Religious Liberty, The future and our choices, The Last Acceptable Prejudice and tagged abortion, can. 915, HHS, Pres. Obama, religious liberty, Rep Hochul. Bookmark the permalink.