Fr. Z on Fr. Hunwicke on the Franciscan Friars of the Immaculate. 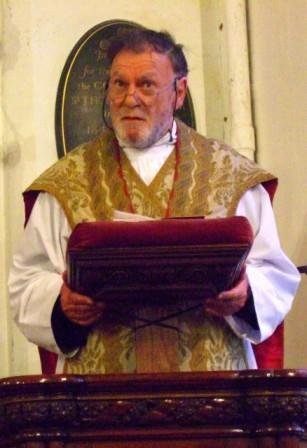 I can say with great pleasure that Fr. John Hunwicke, a Catholic priest of the Ordinariate of Our Lady of Walsingham, is blogging again.  He had a blog which was for a while repressed by the “powers that be”.  He understands something of what it is to be forced to do things by people with greater power.  I have met Fr. Hunwicke twice.  He strikes me as being one of those very smart guys, who has learned a lot by a) reaching his age and b) having suffered at the hands of those who should have been the most diligent in his care.

Fr. Hunwicke opined on the situation of the Franciscan Friars of the Immaculate, who – as reports have it – may be forced to take some sort of oath concerning the Novus Ordo and Vatican II.  Since I don’t know the official text of the Oath yet, I hesitate to speculate much about it.

As you know, the Franciscan Friars have internal disputes.  Some faction within the group brought the Holy See’s Congregation for Religious into the picture.  Unless you are bent on destruction (or are simply kinda dumb) that’s rarely a good idea.  The Congregation conducted what seems very much like a hostile take-over of the whole institute.  A “commissar” was appointed with absolute power over the Friars.  He has used it.  Included in his absolute control includes what seems a violation of the Church’s universal legislation in Summorum Pontificum, which was deeply disturbing for many of the traditional bent.  I can’t help but think that a lot of the Friars’ problems were to a certain extent brought on themselves, with the help of a lot of zealous lay people.

Enough of that.  Here is something from Fr. Hunwicke which, though based on speculation so far, smacks of the truth.  Keeping in mind an impending oath to be imposed by the Commissar, we enter in medias res:

Where an undertaking or oath is substantially meaningless, [As in this case.  I haven’t seen any evidence that traditionally-minded Friars have rejected Vatican II or the Novus Ordo as invalid or anything like.] the over-scrupulous soul might hesitate to subscribe until someone has resolved all ambiguities. In my judgement, such scrupulosity would be completely excessive and would not in any way represent the obligation placed by God upon a good Catholic. [We are not just talking about “good Catholics” but about religious who make vow of obedience.  Let that pass.] We are expected to get on with living the Catholic life, not to waste our energies in endlessly picking over irrelevant scruples. [o{]:¬)] And [NB] the Holy Father Pope Francis has recently and justly urged those in authority in the Church “not to exhaust their energies in inspecting and verifying” (EG 94). [Rem acu tetigit.  But this is precisely what is going on.  Would Francis approve?  On the other hand, Francis is constantly saying in his daily fervorini that no one should ever speak badly of anyone else. BUT then he fills his own daily fervorini with snarky comments about hard to identify groups of people.  I digress.] If Authority imposes an undertaking which is vague to the point of being meaningless, then one may take that oath. This is not like subscribing to something which is untrue. [True.]

At the basis of all this is a very unpleasant implication. Asking these worthy religious men to make these Undertakings is as offensive as it would be to ask a husband to Undertake not to beat his wife. It implies that the exacting of such an Undertaking is necessary. [There it is.] One recalls Pope Francis’ words about a “persecution which appears a veritable witch hunt” (EG 100). [Rem iterum acu tetigit.] Apparently the Order has been accused of ‘crypto-lefebvreism’. [I haven’t seen that yet, but it sounds as if it could be accurate.] I know no reason to suspect the friars of this. [I have NEVER seen that. Nor, frankly, would someone like Card. Burke be so supportive to them were they so.] But it would be only human if some of them, given the sort of treatment they are being given, had now started to do an audit of what options they had. Is there some faction in Rome deliberately trying to provoke a schism? [I don’t think that category is appropriate in the case of the FFIs.  But…] And are there people behind the scenes labouring to ensure that an atmosphere is created in which the regularisation of the SSPX is rendered permanently impossible? [The answer to that, Fr. Hunwicke, is YES.] Let us pray that the Holy Father’s reform of the Curia is rapid and radical.  [I wouldn’t be so eager, given who may be put in charge of the reform.]

One of the most important initiatives of Vatican II was the encouragement it gave to the work for ‘Unity’. In my view, there would be something demonic in an ‘Ecumenism’ which was preoccupied with bodies deeply sundered from Catholic Truth while at the same time ecclesial divisions closer home were carefully tended, nurtured, extended, and deepened. If not demonic, then certainly hypocritical. [No.  You got it right the first time.] It would be like loving all men, especially those a long way away, while fostering domestic hatreds in ones own household. [Which is exactly what Screwtape recommend that Wormwood foster in his “patient”.] When the Ordinariates were set up, we experienced this mindset: some who had always been so rhetorical in their advocacy of Unity suddenly turned very nasty about an example of Unity actually happening.

I simply do not believe that our beloved Holy Father knows the half of what is being done in his name.

Neither do I.  But some who are close to the Holy Father do.

Again, I urge people involved in this to consider something I have learned through the years I have fought many battles for traditional Catholic identity and have obtained many scars.

I redirect your attention to Fat Man’s Rules of the House of God.

Fr. Hunwicke, and many other priests, know that this Rule applies:

VIII. THEY CAN ALWAYS HURT YOU MORE.

When you are in the hands of high ecclesiastics, you had better steel yourselves to the fact that when the pain starts, they are just getting started.

Fr. Z is the guy who runs this blog. o{]:¬)
View all posts by Fr. John Zuhlsdorf →
This entry was posted in Mail from priests, Our Catholic Identity, SUMMORUM PONTIFICUM, The Coming Storm, The Drill, The future and our choices, The Last Acceptable Prejudice and tagged Fat Man's Rules, Fr. John Hunwicke, Franciscan Friars of the Immaculate. Bookmark the permalink.