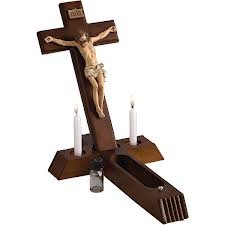 I recently went to a family home to anoint a fellow who is seriously ailing. They participate regularly in the Extraordinary Form at the parish where I help out and so I took my old Roman Ritual (the rite is sublime).

Before my visit I asked if they had a sick call set and, sure enough, they did. It was a Crucifix form set, a wedding gift, which was on their wall for the last 50+ years, unused until yesterday.

I made some comments about how to set things up for my visit and, arriving, found everything just right for the administration of the sacrament.

Note the pieces of bread and lemon which is used to clean the Oleum Infirmorum from Father’s thumb. The cotton balls and bread and lemon should all be burned and the ashes put down the sacrarium or, alternatively buried.  The priest will take care of that.

The other day during my day trip with a priest friend to SW Wisconsin to see sites associated with Ven. Samuel Mazzuchelli.  In one display there was an old set. Sick call sets can take many forms.  It is important that you have one, whichever it may be.

A sick call set will include, at minimum,

Set up a table with the cloth near the bed or place where the sick person is, especially so he can see it
Set up the crucifix and light the blessed candle on either side

People get sick and die.

This is probably your fate if you are not killed suddenly.

Whatever may be the method God has in mind for you, death is not optional.

This important sequence of the human experience is provided for by Our Lord.  He gave His Church the ordinary means of our salvation.  We need the spiritual and, sometimes, physical strengthening that is conferred through the Sacrament of Anointing.  When given in the last moments of life, it is called “Extreme Unction”.  Unctio, in Latin, is anointing.  “Extreme” refers to “in extremis“, that is, the last moments of life or “at the limits of one’s powers”.

What are the effects of Anointing?

The effects of the Sacrament of Anointing or Anointing of the Sick or, sometimes, Extreme Unction, are:

Anointing was placed in the category of “sacraments of the living”, a handy way of saying that for them to be as effective as they can be, we must receive them while “alive”, that is, not “dead in sin”, that is, in the state of grace.  The key to understanding anointing and forgiveness of mortal sins is that the person must be incapable for one reason or another of confessing mortal sins.  However, upon recovery or a change of condition such that he is capable, he is bound to confess mortal sins in the normal way as soon as possible.  Danger of death always changes the playing field.

It is an abuse of the sacrament of anointing and unhelpful for people when the sacrament is given en masse without regard for the person’s condition of soul or, in many cases, body.

The law about who receives the sacrament is clear:

1514 “The anointing of the sick is not a sacrament for those only who are at the point of death. Hence, as soon as anyone of the faithful begins to be in danger of deathfrom sickness or old age, the fitting time for him to receive this sacrament has certainly already arrived.”

Reflect on the prayer of the Church in the Litany, that we be saved from an unprovided death.

Soldiers and those to be executed ought to be given the opportunity to make their confession, receive Viaticum, hear the commendation of the soul, and so forth.

Some of you might be saying “But Father! But Father!  Vatican II did away with rules.  Pope Francis said so!  All sacraments should be given to everyone all the time.  You make me cry.  I need to be anointed now.  You hate Vatican II!”

Some argue that when a person reaches a certain age, he or she should be anointed because, at that age, you live in a perpetual state of danger of death.  That argument is weak.  If a person is baptized, he draws on the graces of that sacrament.  The sacrament of confirmation is intended also to strength us against temptation and live our Christian character well in moments of challenge.  The sacrament of penance also strengthens us against sinning and it also consoles us when we are not in danger of imminent death.  The Eucharist forgives venial sins and is our greatest consolation and strength in good times and bad, and at every stage of life.  Furthermore, as far as these en masse anointing services are concerned, there is often no provision for people to make a sacramental confession before they are anointed.  It is wrong, simply wrong, to anoint a person in the state of sin if there is no real danger of death looming on the horizon.  The sacrament cannot be effective for forgiveness of mortal sins if he or she is perfectly capable to make a confession.

The sacrament of anointing should truly evoke reverential awe because it associates us with the suffering Lord, the Crucified Savior, whose Passion gives meaning to all human suffering. The fact that the sacrament of anointing, in some circumstances, forgives mortal sins, then the only valid and licit minister of the sacrament is a sacerdos, a priest or bishop.

Neither can nuns in pantsuits with or without a lapel pin.

Neither can a parish volunteer.

Only a priest or bishop validly administers the sacrament of anointing.

This is a surprise to many.

Therefore, anything that resembles or simulates the actions of the sacrament of anointing should be stopped, so that people are not confused a) about what they are getting .. not getting, and b) what different roles in the Church are.

That said: The sacrament of anointing is not simply for extreme nearness of death.  It is for the sick or infirm.  But I think we must be wary of making it into something that it isn’t.  Having a cold doesn’t qualify, unless you have other ailments which mean that a cold could kill you.

Sacraments, all sacraments, should be simultaneously familiar and awesome.

They should be thoroughly incorporated into our lives and approached and received as often as appropriate, with something I can only describe as fearful familiarity, timid  boldness, reverential ease.

They should be both commonplace and also as if the rarest of events.  “Rare” means not only “infrequent” but also “precious, excellent, fine”.

We should be at the same time filled with longing for them when we need them and also filled with pious dread at the mystery of God’s ineffable favor poured out on us for no merit of our own, all because He has deigned to make us His adopted sons and daughters.

So… in short, the Sacrament of Anointing of the Sick can forgive mortal sins in certain circumstances.  It is, however, a sacrament to be received, unless impeded, in the state of grace, and only a priest can give it.

Have a sick call set in your homes and know how to set it up.  God permit that you never need it, but… Fr. Z is the guy who runs this blog. o{]:¬)
View all posts by Fr. John Zuhlsdorf →
This entry was posted in "How To..." - Practical Notes, Liturgy Science Theatre 3000, Our Catholic Identity and tagged danger of death, Extreme Unction, Oleum Infirmorum, Sacrament of Anointing, sacraments of the living, sick call set. Bookmark the permalink.