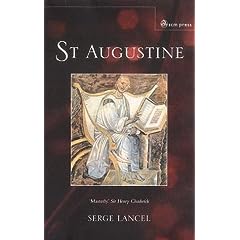 From Serge Lancel’s Augustine, one of the best biographies I know of the great Bishop of Hippo (p. 8 ff – emphases mine):

Before devoting himself entirely to Mother Church, as he approached the age of forty, Augustine had had a concubine for about fifteen years, fo whom he had beem very fond and who had given him a son; then, at the same time as a fleeting engagement, a second short-lived liaison.  But only one woman really counted in his life, and that was his natural mother, Monica.

As we may guess from reading a few pages of Book XI of the Confessions, Patricius had taken a wife in Thagaste from a milieu close to his own.  He had married Monica, as his would describe it in a phrase borrowed from Virgil, “in the fullness of her nubility”, which means that he had not married a child, a practice that was in any case more rare then in Agrica that in Rome itself.  The couple had three children, in what order we do not know: a girl, who remains anonymous to us, but who, once widowed, would later become the superior of a community of nuns, and two boys, Augustine and Navigius, whom we shall find with his brother in Italy, at Cassiciacum, then at Ostia at their dying mother’s bedside.  …

So Monica had been born into a Christian family and was, as we would say today, a practicing believer.  The religious practices of Christians at that time, in North Africa, sometimes included aspects that would be surprising to us, such as the custom of taking offerings of food to the tombs of martyrs, for agapes that only too often degenerated into orgies; an obvious survival of the pagan festival of the Parentalia.  Of course, Monica did not indulge in those excesses.  If the baskets she brought to the cemetery contained, besides gruel and bread, a pitcher of unadulterated wine, when the time came to share libations with other faithful, she herself would take only a tiny amount, diluted with water, sipped from a goblet in front of every tomb visited.  Was this sobriety a memory of some experience in her early youth?  Augustine tells this story which he says he heard from the lady hersself.  Raised in temperance by an old serving-woman who enjoyed the complete trust of Monica’s parents, she had fallen into a bad habit.  Well-behaved girl that she was, she was sent to the cellar to fetch wine from the cask, but before using the goblet she had brought to fill the carafe she would just wet her lips with the wine, not because she liked it, says Augustine, but out of childish mischief.  But gradually she had acquired a taste for it, to the point where she was drinking entire goblets of it with great gusto.  Fortunately she had cured herself of this incipient liking for drink in a burst of pride: the maidservant who accompanied her to the cellar, having fallen out one day with her young mistresss, insultingly called he a “little wine bibber”.  Stung to the quick, Monica had immediately stopped her habit.