ASK FATHER: “Annulments” and appealing to the Roman Rota 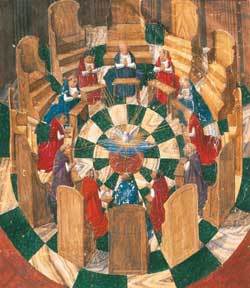 I have a question about annulment and the process.  A friend of ours and her husband have gone through the process in our local diocese. The friend sought the annulment for reasons that we believe (but do not know for sure) are due to marital problems with her husband.  She has told us he was abusive to her along with other things.  She says that they married very young and that she felt she was somewhat unaware of what marriage involved.

The local marriage tribunal has granted her an annulment.  Her husband has publically stated that he will appeal to Rome as he believes that “however much he may be a poor husband, he legitimately married his wife.”   They have numerous children (more than five).  He feels the tribunal granted the annulment in error.

Me being an outside party to all of this; I find it a little
disturbing.  The husband is a poor example of a husband and a father, in my opinion.  He seems to have many very adolescent behaviors, almost as if he never “grew up.”  I do believe that they were immature and most likely received poor marriage prep.  What concerns me is that he is very adamant that he is married.  It is usually the man seeking “out” to remarry, and not the woman.  Maybe I am naive in that perception?

My question is how often cases like this are appealed to the Roman Rota and how often local tribunals are overturned?  I am in a good marriage, but it made me pause a little to think that a tribunal could retroactively end what I consider a legitimate marriage and potentially make all of my children products of a non sacramental marriage.  Does Pope Francis’ “streamlining” of this process a year or two back change the annulment process, the appeal process and the action of the Rota?  Does the Rota reverse local tribunals less frequently now or spend less time reviewing appeals?

A response from a sound canonist follows:

We frequently encounter the phrasing, “The tribunal granted the annulment,” which, as common as it is, is very unhelpful. It accompanies the notion that a declaration of nullity of marriage is something that the Church either gives or withholds, depending on the goodness of the person requesting it. A more helpful analogy is that of a medical diagnosis. People don’t talk about a doctor giving a patient cancer. Rather, the doctor examines the patient, studies the tests, and comes to a conclusion that, yes, this patient has cancer. The doctor may be wrong, for many reasons – the patient could have lied about his symptoms or misinterpreted them; the tests could be flawed; the doctor could be a bad interpreter of the evidence. It’s always a good idea to get a second opinion.

What the Tribunal does in adjudicating marriage cases is similar. The Tribunal, using a process that has developed over more than a thousand years, examines the evidence that has been provided. It gets testimony, ideally from both parties, from witnesses, and often from experts, and sifts through that evidence to come to as clear a picture as possible of what happened when the bride and the groom exchanged consent. Then, the Judge makes a diagnosis: was this truly a marriage, or not? Like with a medical diagnosis, it’s always good to get a second opinion. Until recently, that second opinion was sought automatically – the Tribunal would forward all cases given an affirmative decision to a second court, and only if that second court ratified the decision, would the parties be declared free to marry. Now, seeking that second opinion is optional, but is still a very good idea.

Like a medical diagnosis, a declaration of nullity can be wrong, and for the same sort of reasons. Someone could lie. Someone could withhold essential evidence. The Judge could misinterpret the facts, or could be a bad interpreter of evidence. Frequently, the Respondent party (the party who requests the tribunal’s investigation is called the Petitioner, the other party is called the Respondent) chooses not to participate. The Respondent may not have an interest in the matter, or may be in agreement with the Petitioner about the nullity of the marriage and may simply not want to exert himself or herself. Sadly, some Respondents who believe that their marriage was valid choose not to participate in the process thinking that, somehow, their lack of participation will stymie the Petitioner’s attempt to “get” an annulment. In truth, if one believes in the validity of one’s marriage, one should want to participate, to provide evidence supporting the presumption of validity. The Tribunal can only make a diagnosis based on the testimony that has been provided. If the preponderance of evidence supports a diagnosis of invalidity because no one has provided evidence of validity, one can hardly fault the Tribunal for rendering a decision on the testimony provided.

Once the local tribunal has rendered a judgment, the parties can seek a second opinion from one of two places: the ordinary Court of Second Instance (which is usually a diocese or archdiocese within the same ecclesiastical province) or the Roman Rota. Only the Rota can receive appeals after the Court of Second Instance has rendered a decision. The Rota is composed of some of the finest canonical minds and is drawn from all over the world. The Rota tends to do very, very good and careful work. It is notoriously slow (just about every pope over the last century has, at one point or another, urged the Rota to adjudicate cases more swiftly), but the work it does is usually of a very high quality. Pushing our analogy further, presenting a case to the Rota, is like a patient going to one of the finest hospitals for a diagnosis – the Johns Hopkins, or Mayo Clinic for marriage cases.

The Rota does not provide regular statistics to the public. There is good reason for this. In dealing with marriage cases, we are dealing with very personal and confidential matters. Anecdotally, a large number of cases that are appealed to the Rota receive negative decisions there. Can one then automatically conclude that local tribunals do a poor job of adjudication? Since not every case is appealed to the Rota, that would be a false conclusion to draw. Similarly, since a high percentage of cases that are presented to local tribunals receive an affirmative decision, can we conclude that local tribunals either do a poor job or are in some sort of collusion with the divorce culture? No, that would be a false conclusion as well. It would be similar to concluding that, since most patients who see a doctor are diagnosed with some illness, therefore doctors are helping to spread disease.

There certainly are cases of poor decisions being made by tribunals – even poor decisions made by the Rota. The Church does not claim that the Lord invested tribunals with the grace of infallibility. Doubtlessly there will be comments made on this post by individuals who either had a bad experience with a tribunal or tribunal official, or who know someone who knows someone who either was “granted an annulment” they didn’t “deserve” or who was refused a declaration of nullity even though he or she is a very, very, very good person.

A good rule of thumb is to avoid idle speculation, especially about details of someone else’s personal life, and that includes his or her marital situation. We are called to be discerning, to care for others, and to love them. When we get to the point where we speculate about whether John and Susie deserved a declaration of nullity, we end up walking down a very dangerous road. Far better to pray for them – to pray that they are living in the light of the truth, which is the narrow road that leads to salvation.

Fr. Z is the guy who runs this blog. o{]:¬)
View all posts by Fr. John Zuhlsdorf →
This entry was posted in "How To..." - Practical Notes, ASK FATHER Question Box, Canon Law, HONORED GUESTS, One Man & One Woman and tagged annulments, Roman Rota. Bookmark the permalink.